INNOVATION IN THE FACE OF TYRANNY

"My stockpile of heatball prototypes, which I used to call “light bulbs”, is running out." 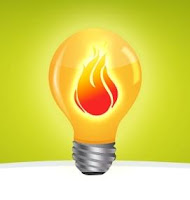 Sometimes people are so clever I wish there was some kind of award to recognize their greatness. Its the little things I'm thinking about, not Nobel Prize territory but something small and ingenious, especially ideas to thwart the tyranny of the nanny state left.

For example, in Europe, the unelected body of EU government decided that any light bulb of over a certain wattage was now illegal in the entirety of Europe. They figured that it wasn't enough to force people to avoid incandescent bulbs, now they had to ban any light of more than 60 watts, to save us all from the myth of human-caused climate disaster.

So two Germans came up with a plan. They studied light bulbs and discovered that they generate more IR radiation (heat) than they do white light - 95% of their radiation being heat and 5% light. So they started marketing higher wattage light bulbs as "Heatballs." Reuters reports:

On their website, the two engineers describe the heatballs as "action art" and as "resistance against legislation which is implemented without recourse to democratic and parliamentary processes."

Rotthaeuser has pledged to donate 30 cents of every heatball sold to saving the rainforest, which the 49-year-old sees as a better way of protecting the environment than investing in energy-saving lamps, which contain toxic mercury.

Basically they've found a way within EU regulations to sell you real light bulbs which people greatly prefer as cheaper and better light over the compact fluorescents, and they're making a killing.

What we need is a conservative Nobel to give prizes to people who come up with innovative and effective ways to defy tyranny and display capitalistic genius. A reward for being brilliant and making a statement against those who would take away our liberty "for our own good." I'm a bit short on cash, but maybe someone else could step up.

*Tip of the ol' bush hat to Tim Blair for this story.
Posted by Christopher R Taylor at 9:29 AM

I think the "conservative Nobel prize" already exists; it is known as a "profit!"