"A very wise man, Montz, once told me that I should pick my favorite actor & compare them to a garbage man.

After a month of not seeing either one, who would you miss more?" 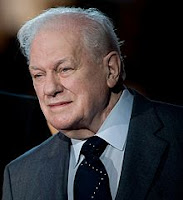 Leo Grin at Big Hollywood took a different tack from many posters there, he tried to find actors that you can trust to be entertaining and interesting without becoming obnoxiously political or having repugnant personal lives. There aren't many out there, as most are idiots or have the judgement of a rabid warthog, but some are out there and they deserve celebrating.

His list was these actors:
Each of these is an actor who can play any sort of role without making any sort of personal statement or cheap partisan attack out of it. They play lefties, they play right wing people, religious or not, each time focusing not on proselytizing but simply playing a role. Duvall was in the woeful, idiotic Handmaiden's Tale that was simply an attack on conservative Christianity in the same level of intellectual capacity as a sea slug trying to understand the space shuttle but Robert Duvall just played the part as well and believably as he could.

Commenters suggested a few more:
Two they missed:
Guys like Mel Gibson and Robert Downey jr almost make this list except for their atrocious personal lives (though Downey seems to have put that behind him for now). Remember this is a list of guys who just want to do their job and don't have godawful personal lives distracting you from their work. Some of them aren't that great in their field, but they work hard and never slam you over the head with their political or personal ideas.

Take John Travolta. He did From Paris With Love which is a "crush the terrorists, no remorse" movie, but he also did Battlefield Earth, The General's Daughter, and Phenomenon, so he's done his share of proselytizing movies. A lot of people suggested John Wayne, but after Green Berets you just can't include him on this kind of list.

The actors on this list just do movies and entertain, and most of them seem to understand what they do isn't all that important or meaningful.
Posted by Christopher R Taylor at 11:19 AM