A GLIMPSE OF HOPE?

“These kids are the epitome of Brown students. They’ve learned to be self-directed, they take risks, they face challenges with total fervor, and they
don’t back off”
-Joyce Reed, Associate Dean at Brown University 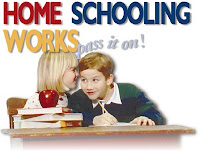 There's a lot of reasons to be less than optimistic lately about the future of the world, and the US in particular. Snowballing government deficit and costs, apathy among workers, a loss of any driving force in the culture that gave us the nation we now enjoy, disinterest in learning and work, and an overall immaturity that seems to run through every layer of society and age group. Too many people reject everything but what is most comfortable, pleasant, and immediately beneficial and as a result ignore long term goals and importance to their own and society's detriment.

Looking at the long term, it is easy to see a nation which, like Rome, was once great but finds its self sliding into corruption, collapse, and even regression rather than continuing to be a strong, vibrant world leader. Yet there are signs of hope in all of this, and one small candle is the home schooling movement.

Home schooling used to be the only kind of schooling, and even into the 19th century in the US, Canada, and Australia, frontier families had to teach at home or kids had no education at all. By the late 70s, only 13,000 kids were being home schooled, but in recent decades the idea began to grow in popularity. By 2003, over 2 million kids were being home schooled, the fastest-growing form of education in the United States. To put it briefly, parents cannot trust public schools to deliver a good education to their children, but can trust them to fill their heads with nonsense, rebellion, and leftist dogma.

Home Schooling has its drawbacks, and not all people are really cut out to home school their kids. Some public schools can be as good as most home schoolers, in rare instances. Yet overall, home schooled kids end up better educated and better ready for life than any other kind.

Don't take my word for it. Here's what the Journal of College Admission (pdf file) reports in their Fall issue:

Many studies have been completed during the past 20 years that examine the academic achievement of the homeeducated (Ray, 2004b). Dozens of researchers have executed these studies. Examples of these studies ranged from a multiyear study in Washington state, three nationwide studies across the United States, and a nationwide study in Canada (Ray, 1994, 1997, 2001c; Rudner, 1999; Wartes, 1991). In study after study, the homeschooled scored, on average, at the 65th to 80th percentile on standardized academic achievement tests in the United States and Canada, compared to the public school average of the 50th percentile.

Researchers, wondering if only certain families––in which the parents have a high educational attainment or family income––are able to homeschool such that their children score high on achievement tests, show that children in homeschool families with low income and in which the parents have little education are scoring, on average, above state-school averages (Ray, 2000, 2004b, ch. 4). In addition, research shows that the parents’ teacher-certification has little to no relationship with their children’s academic achievement, and that the degree of state control of homeschooling (i.e., regulations) has no relationship with academic achievement (Ray, 2004b).

And that's not all.
According to psychological studies, students are at least as well adapted socially as their public school counterparts and adapt better to the transition into adulthood on their own. Colleges and Universities have found that they're better prepar4ed for the step into higher education:

ACTs and SATs are the best-known test predictors of success in university or college in America. Both the SAT and ACT publishers have reported for several years that the scores of the homeschooled are higher, on average, than those from public schools. For example, for the 1999–2000 school year, the home-educated scored an average of 568 in verbal while the state-school (i.e., public-school) average was 501, and 532 in math while the state-school average was 510 (Barber, 2001).

A survey of colleges and universities reported that they found home schooled kids to be better than the alternative. 69% of college educators said they were more academically successful, and a majority agreed that the students were at least as well adjusted socially. Some of these institutions have begun actively recruiting home schooled kids in an effort to bring their academic standards and graduation rates up.

Here's why the home schoolers give me a flicker of home. The average age of a home schooled kid in America, according to a recent survey, is 21. A higher percentage of them by now are college educated than their public school peers. They show a greater understanding of politics and the world around them, and fewer of them get their news from legacy media sources than their peers. Far more of them are readers than the general population, are involved in community service and volunteer, and they vote at a higher percentage rate. Other studies have shown that despite fears of many on the left, even though home schoolers are often raised with a strong religious viewpoint and conviction, they do not end up intolerant, isolated, or ignorant in their understanding of the world and those around them.

In other words, they're better informed, better educated, more intellectually active, more socially and politically aware, and aren't getting their information from the usual sources. This generation is just now starting to enter society in force which means their influence on US culture is just beginning to show its significance.

This, combined with the soldiers coming home after the crucible of combat, the discipline of military, and the experience of life beyond personal comfort for a greater cause than themselves gives me some glimmer of hope for the future. God willing, we might see things start to turn around, if it isn't too late.
Posted by Christopher R Taylor at 8:32 AM

While the positive effect of homeschooling on test scores, at least, may be real, it is swamped by individual variation. I attend a charter school (state-funded, run by an elected separate board of parents) that explicitly refers to itself as college-prep; the majority of the school scores far above 50th percentile. Similarly, you also hear about public schools that are completely abysmal.