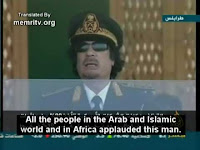 Yesterday I posted on the Chamber of Commerce - foreign donors story, pointing out the problems with President Obama's foreign donations. Today, Pamela Gellar, who's been doing great work on this for several years now, posted on the topic. It seems the records of those foreign campaign donations have been... disappeared. Gellar writes at Big Government:

The Obama campaign claimed that it returned these illegal contributions. And they were prepared for this issue to come to the fore again: when I appeared on Asman’s show Tuesday, apparently Obama’s clean-up crew gave David Asman a record of “refunds.” The White House sent Asman this link showing a refund of the money that came from Gaza, but you’ll notice it doesn’t come near the $33,000 donated to Obama from Gaza; nor does it list Osama Edwan’s refund.

We have been down this road before. The Obama camp claimed in 2008 that they had returned the illegal contributions from Gaza, but this never appeared in the records. They claimed for two years that the money had been returned, but the donors in Gaza said it wasn’t. When we reviewed the records, it hadn’t been returned. Obama’s people claimed that virtually all of the money, about $33,500, was returned by December 6, 2008. But they also claimed that because of a “technical error,” the refunds weren’t reported to the FEC.

She includes a screenshot of the campaign website during the election, which had a pulldown box showing what country you are donating from. John Kerry just claimed foreign leaders wanted him to be president. Obama took money from them to do so. Here's a partial list of countries which the Obama campaign got money from:
Meanwhile, the Chambers of Commerce has refuted the "foreign money" charge.
Posted by Christopher R Taylor at 9:06 AM