THE FIRST AND THE SEPARATION

It’s a bit annoying to me, because I cannot stand when people jump to the conclusion that someone they want to believe is stupid is being stupid when they say something that seems wrong. Think first. Is it wrong? 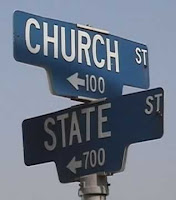 I don't usually watch debates. They tend to be boring, contrived, and the exchange almost never really tells you anything about the candidates except how well prepared and coached they are. However, sometimes something happens at a debate which catches public attention, and the recent Coons-O'Donnell debate had one of those moments. It went like this:

"Where in the Constitution is separation of church and state?" O'Donnell asked while Democrat Chris Coons, an attorney, sat a few feet away.

Coons responded that O'Donnell's question "reveals her fundamental misunderstanding of what our Constitution is. ... The First Amendment establishes a separation."

Her campaign issued a statement later saying O'Donnell "was not questioning the concept of separation of church and state as subsequently established by the courts. She simply made the point that the phrase appears nowhere in the Constitution."

A lot of blogs have discussed and analyzed this, and I'm not going to go into it much but I have to say that I'm very annoyed at a lot of right-leaning blogs which have jumped on O'Donnell for "not knowing the constitution" or being stupid. For instance:

How Come O'Donnell's Flub Gets So Much Furious Attention In The Media and Phil Hare's Doesn't?
-Ace of Spades HQ

Is this even a worthwhile point to talk about during a debate? Is there a well-respected legal scholar somewhere out there who would argue the point that the establishment clause doesn't effectively separate church and state?
-Tigerhawk

It was not, alas, just a momentary gaffe — O’Donnell made it clear, later on, that she had never read the First Amendment to the Constitution.
The Volokh Conspiracy

Look, I expect the legacy media to get this wrong and attack O'Donnell, I expect leftists to attack her and distort what she said. I even expect law students, few of which have bothered to actually read the US Constitution and fewer still study it in their classes (oh sure, they study rulings and judgments about the constitution but the document its self?) to get it wrong.

Sure, some blogs got it right:

So, O'Donnell unquestionably did not agree with the popular liberal conception that the First Amendment by its written terms requires a "separation of church and state," but she was not wrong.
-Legal Insurrection

Plainly, the Constitution does not say "separation of church and state," so there's nothing stupid there. It's provocative, because many people like that gloss on the text.
Ann Althouse

A wall of separation suggests a distinct segregation that does not exist in our modern case law. For instance, the state is allowed to supply religious schools with textbooks and free busing for its children, and deaf people have been allowed to receive free sign interpreters as they go to divinity school. What the courts have said in fact is that there isn’t separation of church and state so much as neutrality between the secular and the religious and among all religions.
-Patterico's Pontifications

But I expect right leaning bloggers to not jump on her statement because they should understand the constitution better than the left, and the media, but I repeat myself.

The US Constitution does not say anything about separation of church and state. It is about distinction between church and state. I've written about this quite a bit in the past so I'm not going over it again (read Althouse and Patterico if you want more on the topic), but the idea of a wall of separation was not meant as legal dogma and was written by Jefferson to a church assuring them that there'd be no persecution of alternate theology or religion in the US by the government. To put it very briefly, the first amendment (along with 4 other freedoms attorney Coons couldn't remember) orders the government to not control religion and religion to not control government. That's it, not a wall, not separation, just an issue of power.

The left loves the fiction that the first amendment bars religious thought or activity on, by, or near government, but that's simply not the case. Christine O'Donnell understands that, and Chris Coons does not, because he clings to the leftist dogma on the topic instead of the truth. And all those right-leaning guys (likely terrified of those social conservatives) should know better, especially during an election season, than to pile on a candidate up against a hard left Democrat in a tough fight.

*UPDATE: Ace of Spades points out that he was suckered by the media when the Washington Post account I quoted above had her saying "you are saying that's not in the first amendment" when she actually said "The First Amendment does [establish what you claim]? ... So you're telling me that the separation of church and state, the phrase 'separation of church and state,' is in the First Amendment?" Now, that's not a significant distinction nor does it make her right when she was wrong before, but Ace is reversing himself on that point.
**UPDATE: Courtesy a commenter at AOSHQ, the transcript of the part in question:

O'Donnell: Where in the Constitution is the separation of church and state?

Coons: It's in the First Amendment... no an excellent ques...

{interrupted by moderator to silence the laughing crowd}

Coons: The First Amendment establishes the separation, the fact that the federal government shall not establish a religion, and decisional law by the Supreme Court over many many decades...

O'Donnell: The First Amendment does?

Coons: ...clarifies and enshrines that there is a separation of church and state that our courts and our laws must respect...

Just to make things clear.
Posted by Christopher R Taylor at 8:47 AM

I think O'Donnell's problems with the Constitution showed up later in the debate when she couldn't remember what the 14th, 16th, and 17th Amendments were. She clearly knew the issues and arguments surrounding them when somebody told her what each Amendment was, but a Senate candidate shouldn't have to refer to their notes just to know what those Amendments mean.

As to the 1st Amendment, I sort of disagree. It does create a seperation between church and state, in that it forbids them from ever being the same thing. There are still plenty of places in the public space where they can (and should) overlap, but only as "seperate" entities. A good conservative politician should be able to discuss that without looking clueless. It's like if one politician tried to make another look foolish over a free speech issue because the constituiton does not say, word for word, that you can't say bad things about the government. O'Donnell missed an opportunity to educate people on the 1st Amendment, and the left's constant misuse of it, becasue she was trying to get in some sort of political 'gotcha' over a semantic legal idea that most people are willing to treat as a given (that the 1st Amendment creates some form of seperation between church and state). So I don't really think this was a failing of her understanding of the Constitution, but a sign that she is a poor advocate for the Constituion. With that said, I'd still vote for her over Coons (whose revealed not just blind spots in his knowledge, but a fundamental misunderstanding of the Constituiton) if I lived in their state.