DON'T KNOW MUCH ABOUT HISTORY 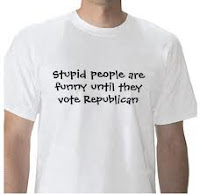 "If Bush isn't stupid, he'll serve as a poster boy until someone stupider can be found."
To hear the left's elite tell it, conservatives are knuckle-dragging morons, scarcely able to fit a sentence together. Anyone on the right is an idiot, blown by the corporate winds of Fox News and Rush Limbaugh, a puppet of the sinister vast right wing conspiracy. The left, on the other hand, is continuously touted as intelligent, sophisticated, learned, educated, and more intellectually capable.

Consider the amusingly rigged studies which come from left leaning universities every year or so, telling us that anyone to the right of Fritz Mondale is either an idiot or insane. Any major conservative figure is declared stupid, whether President Reagan, Sarah Palin, or even someone only slightly conservative such as President Bush. The narrative is continuous and consistent: if you're on the right, you're stupid, uninformed, and easily swayed by advertising.

Yet upon closer inspection, the opposite appears to be true. For example, listeners of the Rush Limbaugh show continually test high for knowledge of events and news, education level, and identifying significant world figures.

On the other hand, as Charles Blow bemoans in a recent column, the left seems less educated and less informed than ever:

This doesn't speak well for the Democrats and the left, but it isn't surprising in one sense. If you live in a district of a city so heavily gerrymandered that the Democrat is guaranteed to win every election, why even pay attention or vote, for that matter?

Or consider Kate Zernike, writer for the New York Times. She writes of Tea Party movement:

...when it comes to ideology, it has reached back to dusty bookshelves for long-dormant ideas. It has resurrected once-obscure texts by dead writers — in some cases elevating them to best-seller status — to form a kind of Tea Party canon.

What are these ancient texts she refers to? Books like The Road to Serfdom by nobel prize winner Frederich Hayek, a book which has never been out of print. Hayek outlived Rules for Radicals writer Saul Alinsky by 20 years. Another is Atlas Shrugged by Ayn Rand, which is being worked on as a major motion picture, and was published in 1957. It too has been in continual print for decades.

Other books she mentions are older, such as The Law by Bastiat, but her assertion that these books are dusty and obscure suggests more about her education and cultural surroundings than the tea party movement. For those on the right, these books and writings such as Democracy in America, the writings of Montesquieu, Locke, and others have long been studied and enjoyed. Formative documents of the founding fathers such as the Federalist and Anti-Federalist papers and the US Constitution have been conservative bread and butter since the 60s, and earlier.

With this lack of historical perspective and such ignorance on basic issues such as what party controls congress, the perception of the left as elite, educated, and sophisticated while the right is cretinous, ignorant, and unlearned has to give way to the reality that right now, the right seems the more educated and well-versed not just in America's past and history, but what's happening right now.

Which is probably why we're so upset.

This was originally posted at The Examiner Opinion Zone.
Posted by Christopher R Taylor at 8:30 AM