"When Europe's political leaders do not stand up to the thugs, they lend credence to the idea that Israel is the source of all the world's problems - and they guarantee more ugliness. If that is not anti-Semitism, I don't know what is." 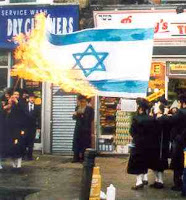 One of the big sources of confusion for many Republicans and non-Republican conservatives (such as myself) is how the Jewish voting bloc is so reliably and overwhelmingly Democratic Party voters. Many trace it back to FDR and his heroic leadership of America to fight the Nazis in Europe, but that had nothing to do with stopping their evil against Jews, and FDR ordered a ship of Jewish refugees away from American shores before the war.

Each year that goes by it seems more obvious that the left and Democrats in office are more hostile toward Israel and Jews. It used to be only the whacko white supremacist groups that would complain about sinister Jewish dominance of American policy, but now actual Democrat politicians and leftist academics are making the same arguments. It used to only be crazed anti-semites and neo-Nazis who would bring up the old lies about Jews like blood libel, but its the leftist protesters who do it now - they were at nearly every "anti-War" protest held, conveniently not shown on camera by the legacy media.

Anti-Semitism is on the rise in Europe and America, and now we have a president who appears to share this anti-Israel viewpoint. Even before election, then-Senator Obama showed his neophyte incompetence in diplomatic matters, as Jackson Deihl recently wrote about at the Washington Post (hat tip Ace of Spades HQ):

The Palestinian president's stand has frustrated a lot of people -- including his own prime minister, Salaam Fayyad, and the president of Egypt, Hosni Mubarak, both of whom have said that the settlement issue should not be an obstacle to the negotiations. At a recent dinner in Washington, Fayyad pointed out that any building in the settlements during the next year would have no effect on the outcome of the talks or the future Palestinian state.

So why does Abbas stubbornly persist in his self-defeating position? In an interview with Israeli television Sunday night, he offered a remarkably candid explanation: "When Obama came to power, he is the one who announced that settlement activity must be stopped," he said. "If America says it and Europe says it and the whole world says it, you want me not to say it?"

The statement confirmed something that many Mideast watchers have suspected for a long time: that the settlement impasse originated not with Netanyahu or Abbas, but with Obama -- who by insisting on an Israeli freeze has created a near-insuperable obstacle to the peace process he is trying to promote.

Abbas has a point: if the president of the US holds a position, how is it radical for him to hold the same one? After all, since its inception, America has been one of Israel's strongest and most reliable friends. Obama's casual words to charm leftist voters and echo the basic left academic line has done more damage to the peace talks he wants to take place than a thousand bombs.

Lately, though, the US under Democratic Party leadership has been less and less a friend to Israel. Obama administration spokesman P.J. Crowle demonstrated he was incapable of actually saying that Israel has a right to exist and is recognized as a sovereign nation by the US Government (courtesy Paul Mirengoff at Power Line):

QUESTION: P.J., do you recognize Israel as a Jewish state and will you try to convince the Palestinians to recognize it?

MR. CROWLEY: We will continue our discussions with the parties. I would expect, following up on the Arab League meetings of late last week that George Mitchell will go to the region at some point. I'm not announcing anything, but I -- it would be logical for us to follow up directly with the parties, see where they are. . . .

QUESTION: And do you recognize Israel as a Jewish state?

MR. CROWLEY: We recognize the aspiration of the people of Israel. It has -- it's a democracy. In that democracy, there's a guarantee of freedom and liberties to all of its citizens. But as the Secretary has said, we understand that -- the special character of the state of Israel.

When pressed by three different reporters to actually answer the simple "yes or no" question, he finally gave this statement:

We recognize that Israel is a – as it says itself, is a Jewish state, yes.

In other words not a sovereign state with a right to exist, but just a "Jewish state." And when pressed to answer if he actually wants the palestinians to recognize this, he couldn't answer that either. It was a simple yes or no, but he didn't have a yes... which means "no." With friends like these, its easy to see why Israelis are a bit less than at ease.

Surrounded by enemies who have vowed publicly and repeatedly to destroy them and born of a generation betrayed by their countries and herded to horrific doom by their government, Israelis are understandably a bit paranoid about their future. Having their once-greatest friend not even able to clearly state that Israel even has a right to exist is not going to help that. Yet Jews in America seem not to care. In fact, many seem to think Israel is a problem and that if it just went away everything would be better.

Rupert Murdoch recently spoke to the Jewish Anti Defamation League and he brought up the fact that the left increasingly is hostile to Jews (again courtesy Power Line):

Back in 2002 the president of Harvard, Larry Summers, put it this way: "Where anti-Semitism and views that are profoundly anti-Israeli have traditionally been the primary preserve of poorly educated right-wing populists, profoundly anti-Israel views are increasingly finding support in progressive intellectual communities. Serious and thoughtful people are advocating and taking actions that are anti-Semitic in their effect if not their intent."

He also went on at length about the growing anti-Jewish perspective of Europe, usually disguised as opposition to Zionist Jews or those who dare to believe Israel should be able to defend its self from perpetual terrorist and rocket attacks. He then goes on to point out that as the world watches America, the US government is distancing its self from Israel:

Some believe that if America wants to gain credibility in the Muslim world and advance the cause of peace, Washington needs to put some distance between itself and Israel. My view is the opposite. Far from making peace more possible, we are making hostilities more certain. Far from making things better for the Palestinian people, sour relations between the United States and Israel guarantees that ordinary Palestinians will continue to suffer.

The peace we all want will come when Israel feels secure - not when Washington feels distant.

This is a flaw of worldview, based on the idea that if we're only nicer to people, they'll be nice back. Previous administrations, even Democrat ones, understood that we're better off nurturing and backing the one stable democracy in the entire oil-rich region. The Obama administration disagrees, as academic leftists, they see Israel as the problem. Jews are one of the most oppressed minorities on earth, something you'd think the left would celebrate and embrace. Yet, even surrounded and greatly outnumbered by hate-filled oppressors, the left chooses to attack Jews instead.

Why? That's probably stuff for an entirely separate post, but in brief I'm convinced it has to do with multiculturalism and leftist atheism. Jews are responsible for half of the Judeo-Christian worldview, which the left sees as absolutely oppressive and wrong. Jews are largely from white European nations and backed by the United States, which makes them the "pet" of the great oppressor: white males and the USA, according to the academic left. So their status as minority is obliterated, much like Asians in the US. Sure, there's fewer of them, but they're so successful and capable that they must be bad guys oppressing others because to the left, no one succeeds without someone else being pushed down. When you combine this with fear of Islam and the burning need to defend what is perceived as the oppressed other in Muslims, the desire to feed the crocodile everyone else so they're eaten last seems to be starting with Jews.

Murdoch closes with a little anecdote which sounds an eerie tone today:

...back in 1937, a man named Vladimir Jabotinsky urged Britain to open up an escape route for Jews fleeing Europe. Only a Jewish homeland, he said, could protect European Jews from the coming calamity. In prophetic words, he described the problem this way: "It is not the anti-Semitism of men," he said. "It is, above all, the anti-Semitism of things, the inherent xenophobia of the body social or the body economic under which we suffer."

Institutionalized anti-Jewish thought is a serious concern for everyone. Every Jew in particular should be disturbed by the ominous shift in the west's governments toward their people and Israel. This will not be isolated to just one group of Jews living way over there, its being pointed at Jews living everywhere.

Yet like clockwork, you'll see a huge majority of Jews vote for Democrats this election, unless somehow they've started to finally wake up.
Posted by Christopher R Taylor at 8:19 AM