"Admiral Akbar was just a squid head with a stupid line. It’s a trap. I get it. I get that there’s nothing to get except that you get it." 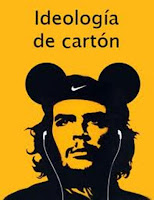 If you ask most people, they will say they can't stand a hipster. Too trendy, too pretentious, to deliberately posed and contrived, is the complaint. Hipsters are the kind that are always on the cutting edge of style and fashion, wearing certain kinds of clothes and having exactly the right trendy likes and dislikes. They buy every Apple product made because its hip, not because they need or even necessarily want it. They all voted for Obama because he was cool.

Yet when it comes down to it, there's a hipster in almost ever young person in America. Love internet memes? Crack up just by being shown the Forever Alone guy? Want to make your own lego zombie pirate star wars parody in steampunk? You're a closet hipster.

Its not that enjoying this stuff is necessarily wrong, its that it is derivative, uninventive, and sheepish. Not shy and retiring but like a herd of sheep that follows a leader without thinking; its just easier that way. James Lileks wrote about this effect recently, trying to pin down what it was that upset him about the latest mailed around internet meme:

Today I saw something that brought up a great gout of bile, and I’m still trying to figure out why. It was on a site devoted to funny pictures from clever people, mostly illustrations or cartoons. It had Mario. There was another picture on the page that had a stormtrooper from Star Wars. A meme was involved. A meme was redefined slightly to encompass Mario. Or Star Wars. Perhaps there was Lego. Whatever: it was the 936,206th time I’d seen someone spend a great deal of talent and imagination on Mario, in order to create a Juxtaposition that Remixed Things to make you think, whoa, that’s a juxtaposition there, and I have a deep emotional reaction because it brings back feelings of childhood. Well, not deep. Well, not childhood.
...
I am tired of all of it. I think the breaking point was a link, passed around and tweeted ad nauseum, that promised “Bohemian Rhapsody performed on slide whistles.” I stared at that, wondering who in the name of God – sorry, who in the name of the Flying Spaghetti Monster – would care to hear such a thing. It’s like a link that threatens “the Star Wars theme played by 500 kazoos, performed by breakdancing Chinese police.” It’s passed around and branded as HIP because it has all the basics: something from the 70s or 80s, something that got its hooks into nerd culture, and adds something unexpected, and this = LOLs. In a way, I admire the creators of these things; I may consider grafting the YouTube video of the fat baby who propels himself around a wet floor with the power of his buttocks on the floating things that appeared in a Quake game and shot rockets at my head. It would be awesome because it would be two things you recognize from different contexts, put together!!!!111!!

I don’t mean to slag on the people who find clever ways to recombinate this and that, and I certainly understand the appeal of slathering the banalities of your childhood with the ironic sensibility you acquired through years of painstaking sneerage; I’m guilty of all of that. It just seems as there’s something . . . sad about spending so much time investing these images and cliches with new meaning. There’s no meaning there in the first place, aside from being There when you were 12, and unlike advertising or other examples of mainstream culture there aren’t any resonances, anything that connects to a larger culture. Mario was just a blob of pixels; Admiral Akbar was just a squid head with a stupid line. It’s a trap. I get it. I get that there’s nothing to get except that you get it.

We need some new things. We don’t need another reboot. We need a boot.

For me the word "meme" is one of those terms that makes me want to Gibbslap someone. Did you see what I did there? I took a popular culture concept and used it to make an emotive and comedic connection. It was easy, it was something someone else has done, and it was already tired.
I agree with Lileks here. We need to not redo what's been done a billion times, we need to stop recombining what we already know, we need to come up with new and interesting and thoughtful. It isn't that this can't be fun once in a while, but its pretty much all you get. LOLCats are fun and cute... to a point, but after a while they get a bit absurd and dull.

How many times do we need to see a picture of someone being horribly humiliated or mistaken with the word FAIL on them before its bad? Wait, I know: when its a gay guy. As a culture, this kind of thing is like kids who just never grow up, obsessing on aspects of their childhood like a Hollywood producer looking for another movie idea. Get me a copy of Variety and make a movie about that cartoon I watched, it was great - Godzookie or something. Put Harrison Ford in a costume as Godzilla.

This endless rehashing of popular culture lacks any depth because by design it has no depth. It is deliberately trivial and frivolous, intentionally created to avoid any thought, meaning, import, or gravity. People don't just use it to escape life being hard, they use it instead of life being hard. The results are rarely funny in a real objective sense, but they are frivolous, lacking in significance and frothy, the kind of thing that makes you laugh but you aren't sure why. Animated Lego Bambi vs Godzilla isn't any better than the original but its trendy and hip, so we love it, but why?

There are three kinds of culture out there, I believe*. Popular Culture, Folk Culture, and High Culture. Each has its place, and each is significant in its own right.

Pop Culture is the meme, the viral internet video, the hot new fashion. Popular Culture the realm of Napoleon Dynamite and LOLCats. This is where Andy Warhol made his living, and why Che is popular as an icon despite being as horrific and evil as Hitler or Pol Pot.

Folk Culture is a bit more significant and deeper. It is the kind of thing that a society creates which lasts and is intrinsic to the definition of what makes up its culture and identity. In music its called "roots" where songs are a part of American identity and history. In art it is the Hudson River School and films like Citizen Kane. Folk Culture lasts and means more to people than pop because instead of being based on what is new and emotionally exciting and surprising, it is based on the lives and rhythms of people and what drives them.

High Culture transcends nations and peoples. This is the realm of classical music, Rembrandt, and Shakespeare. This is art and culture so great it endures through centuries, so powerful it reaches everyone regardless of their pop and folk culture, and it is the realm of all true art rather than design and image.

When any one of these obliterates or obscures the others, then I believe a society suffers. By having only or even primarily high culture a nation demolishes its identity and suppresses the enthusiasm and emotion of its youth. It ceases to have fun and be light and entertaining and all things must be fraught with Deep Significance© where only the most learned are heard and the most talented can achieve.

By having pop culture as the dominant culture to the point of obscuring all other cultural types, a culture is diminished by having no depth, no meaning, and no future. Clinging to the repeated icons of the recent past and embracing only that which is easily accessible - and just as easily abandoned - there's no continuity or sense of identity for a people. All becomes trivial and frivolous, without real humor or understanding, only mockery, satire, and the absurd.

See the problem isn't having mashups of pop culture images and icons, its having only or almost exclusively that to the disparagement or utter rejection of other kinds of culture. Have fun with LOLUnicorns and Cthulhu demotivators, enjoy your Family Guy Starsky and Hutch parody. Just don't make that the only or even the most significant kind of art and culture you enjoy. That's fine for kids but we have to grow up and move on, or stagnate.

And that's what is so disturbing about the present cultural identity. When the I-President can win so comfortably without any depth, the nation has reached a critical point where we are, as Neil Postman wrote, truly Amusing Ourselves to Death as a culture, as a nation, and as a people.

*I got this threefold distinction concept from H. Richard Niebuhr's book Christ and Culture.
Posted by Christopher R Taylor at 8:05 AM

I'm hit and miss with this stuff. I thought Napoleon Dynamite was hilarious, but don't get LOLcats. I think the iPhone is the best technogadget that has ever been invented, but I'm kind of 'blah' about Apples other offerings. 4Chan and Southpark have never been very appealing to me, but I watched the youtube video 10 times of the guy playing the SuperMario Bro theme on his violin as the game played in the background. I like just enough of this stuff to have a hard time getting too worked up about other people liking it too much or not enough.

I do like your breakdown of cultural genres into pop, folk, and high art. It fits well across all art forms, but especially so with film, music, and literature.

But I will say, for somebody who enjoyes the entire spectrum of culture you describe, this is a golden age. Pop art and folk art are being cranked out at unprecendented levels, and while there is a bunch of crap out there, the sheer volume makes it easy to find good stuff if you just take the time to look (some of my favorite music and songwritng of all time has come about in the last 10-15 years, but you just don't hear it on the radio). And while the production of quality high art seems to be on the decline, access to the historical canon high art is pretty much ubiquitous. If my grandfather had wanted to listen to Wagner, or read Blackstone, it would have been difficult for most of his life to simply procure the means to do so. Now it can be done in 5 minutes, from just about anywhere. That's got to be worth putting up with a bunch of stupidity in order to maintain.

Culture Vultures have always been with us, but now we have Cultural Cannibalism...

I got that cultural distinction trilogy from Niebuhr's book Christ and Culture, better add that note to the post.

And that's a good article on culture, Somber.