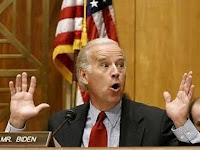 I've posted a lot on this topic around the net on various blogs, but never on WATN. What's that topic? The comparison between Joe Biden and Christine O'Donnell. Now vice president, Joe Biden was first elected to the US Senate in 1972 and finally retired to run for president in 2008. Through his career, Biden has become infamous for saying insulting, contradictory, idiotic, and blatantly false things. Here are a few samples:
And that's just a woeful sampler. His greatest hit lately? This gem about the government:

“Every single great idea that has marked the 21st century, the 20th century and the 19th century has required government vision and government incentive. In the middle of the Civil War you had a guy named Lincoln paying people $16,000 for every 40 miles of track they laid across the continental United States. … No private enterprise would have done that for another 35 years.”

Actually the US Government didn't actually pay people for their track, they gave land grants, donating money that the government owned to railroad companies for the track they laid. Lincoln was long dead and the civil war was long over before the transcontinental railroad was started, although it was his dream, and the president didn't control the money of the US government then any more than he does now.

Yet even if President Lincoln did pay to create the transcontinental railroad, that doesn't mean even a minority of the great ideas in the last 3 centuries have "required government vision and incentive." In fact almost none of the great ideas had anything to do with government. The space program is about it, I cannot think of another major great idea in the history of the United States which required government money and vision.

And this is what it comes down to for Delaware voters: you were willing to vote for this bozo for more than forty years in a row, despite his idiotic statements, stupid mistakes, contradictions and insulting utterings. Christine O'Donnell is said to be an idiot, and she says dumb stuff sometimes. She seems a bit unprepared for the job she's about to start - like a young Biden who was the sixth youngest Senator in US history when first elected after almost no political experience.

Seems to me the big difference between these two isn't intelligence, capability, or a flawless past for one and flaws for the other. Its between someone who thinks government is the greatest thing in human history and was responsible for all the great things that have happened in the United States... and someone who is suspicious of government, wants it limited, and wants to stop spending so much of your money.

Which will it be? Because all the rest is simply distraction.
Posted by Christopher R Taylor at 7:56 AM

I have felt since he was picked as VP that it was a mistake. It was a chance to put someone different in as VP instead of rewarding basically a lifelong old school Democratic and for me when he was picked it told me all I really needed to know about this Presidency. It was and is business as usual just with a slightly different look.

It might have been insurance too, nobody on earth wants President Biden.