"It's now obvious that unless the legislature reins in this Big Brother, taxation-through-citation scam, the people are gonna do it for them" 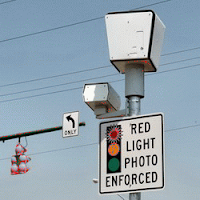 Traffic Cameras are a consistent source of income for cities that use them. While its true that Arizona was losing money on theirs (they set up speed cameras around the state then sent out tickets, but because they didn't have the manpower to follow up on the tickets, the tickets lapsed and the fines were never collected), usually they result in hundreds of thousands if not millions of dollars a year in earnings.

For example, in Sydney Australia, cameras are earning as much as $1.7 million a year. At A1 Eleksley southbound in England, southeast of Manchester, a speeding camera there has earned almost $2 million over four years.

The math is pretty simple, as shown in this story by Dee Riggs in the Wenatchee World:

Based on a fine of $124 per ticket, and factoring in the $14,400 it costs to run the cameras, the city could earn $62,604 off red-light infractions in July. Mayor Dennis Johnson noted, however, that some of those tickets could be challenged or left unpaid and go to collection.

Cities are earning more money from these devices, and that's useful in a time of recession and reduced tax revenues. And if they have to adjust the yellow light timing to get more tickets, well so be it. And now, Governor Schwarzenegger of California is pushing to have the red light cameras issue speeding tickets, too.

As someone noted in the Daily Mail story above "For these cameras to be raking in all that money year after year shows that the cameras don't work, because if they did there wouldn't be anybody speeding." That's an interesting point, but then we don't know what they'd be earning if no one knew they were present. And as I previously noted in a WATN wrapup there's some evidence that these cameras do not actually make traffic any safer.

And there's plenty of evidence that traffic cameras are faulty to begin with. The Newspaper.com has stories from around the world in which cameras and the courts are making errors and misusing the data to gain revenues. Recently the voters of Washington State decided they wanted to try a ballot referendum on the cameras, to put the issue to voters: do you want these things in place? The government of Washington ruled that this wasn't a topic that voters could decide.

The Washington State Supreme Court ruled against that, noting that this was an issue voters are given the power to decide on in the Washington State constitution. Traffic camera companies are putting big money into the state to try to stop this vote because its almost certain the voters will decide they aren't interested in them being legal in the state.

My problem isn't necessarily with the cameras themselves, but with how they are used, why they are in place, what these municipalities are doing with them to make more money, and how cops are mysteriously immune to their tickets in some places. I think if we know anything right now, we know that we can't trust our government to have more power.
Posted by Christopher R Taylor at 11:16 AM