"The thing that really bothers me about how Tea Party conservative women get treated is the way their general social views about society are extrapolated by the media to represent their legislative agenda."
-Eric 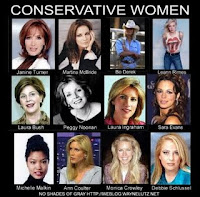 Social Conservatism has a bit of a bad name these days. While the Tea Party movement has a lot of momentum and consists of a great number of social conservatives, the primary driving force is concerns over taxes and spending by the federal government. Social issues like abortion, gay "marriage," and general morality tend not to get a lot of attention, and even are considered bad for the movement if brought up. Some fiscal conservatives blame events like the emergency session of congress called by Representative DeLay to address the Terri Schiavo story for the ascendancy of Democrats to power.

These viewpoints are being repeatedly hyped as extreme, radical, and crazy by the left, and the media is more than willing to follow up on this viewpoint:

Breaking: Christine O'Donnell has had sex
The GOP's Delaware embarrassment wasn't always so chaste, as she revealed in 2004
-Alex Pareene, Salon

"she favors an approach that's even more extreme than the Republicans we got in Washington."
-President Obama

As I wrote about a few days ago (and got Eric's comment inspired this post) this is part of the "nuts and sluts" attack on female GOP candidates:

That is the mode of attack Democrats use against conservative women. Sarah Palin is the prime example, as she routinely is called crazy and is sexualized by the left (to the silence of liberal feminist groups).

Why this approach? Well part of it is simply politics; the Democratic Party thinks that it can convince moderate voters to stay away from these women and vote for their extreme left opponents: Senate Majority Leader Harry Reid and his "pet" Christopher Coons. But there's another angle to this as well, one that some libertarians and those who call themselves fiscal conservatives seem to hold.

For the left at least, there's no overarching ethical structure to determine or encourage right and wrong in society. If people are to be directed toward or prevented from various actions and attitudes the law is the primary tool on the left. So when a social conservative says they are opposed to both parents working, then the left assumes that means "...and therefore I'm going to pass a law banning it." The idea that this can be a personal viewpoint without any necessary legal force behind it is alien to this viewpoint.

Other positions, such as abortion, are thought to be so significant and important that the laws need to be changed. These are areas in which the impact of the action in question is actually critical to society and human life (abortion in particular) to the social conservative. And still other positions are simply a case of wanting to hold the line: you shall not pass this point. Gay "marriage" is one such case. The desire is not for new laws in this case, but for the laws to not be changed, for things to not be pushed any further by the left.

And in the end, personal positions on various topics might be considered shockingly old fashioned or reprehensible by the left - and many in the press - but that does not necessarily mean most of America agrees with that viewpoint. While beltway insiders and Berkley professors might think Sharron Angel is an extremist for wanting to shut down the Department of Education and the National Endowment for the Arts, I think most people in America would be less dismayed, and many would nod in agreement.

In a way, the reaction to and coverage of these women says a lot more about the press and the left than it does the nation at large and they might be in for a big surprise this November when the people come to have their say.
Posted by Christopher R Taylor at 6:30 AM