THAT OUGHT TO WIN THEM OVER 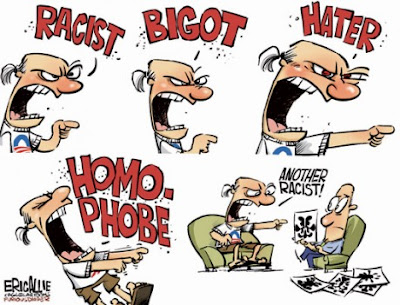 As Charles Krauthammer puts it in a recent column about oikophobia:

Ah, the people, the little people, the small-town people, the "bitter" people, as Barack Obama in an unguarded moment once memorably called them, clinging "to guns or religion or" -- this part is less remembered -- "antipathy toward people who aren't like them."

That's a polite way of saying: clinging to bigotry. And promiscuous charges of bigotry are precisely how our current rulers and their vast media auxiliary react to an obstreperous citizenry that insists on incorrect thinking.

-- Resistance to the vast expansion of government power, intrusiveness and debt, as represented by the Tea Party movement? Why, racist resentment toward a black president.

-- Disgust and alarm with the federal government's unwillingness to curb illegal immigration, as crystallized in the Arizona law? Nativism.

-- Opposition to the most radical redefinition of marriage in human history, as expressed in Proposition 8 in California? Homophobia.

-- Opposition to a 15-story Islamic center and mosque near Ground Zero? Islamophobia.

Now we know why the country has become "ungovernable," last year's excuse for the Democrats' failure of governance: Who can possibly govern a nation of racist, nativist, homophobic Islamophobes?

For some reason this arrogant, patronizing, insulting, and elitist approach is not resonating well with voters.
Posted by Christopher R Taylor at 7:36 AM