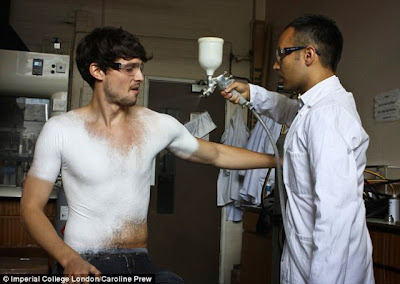 Well, its a new product called Fabrican which allows you to spray on a shirt. Tamara Cohen explains in the Daily Mail:

Fabrican - literally fabric in an aerosol can - is the brainchild of Spanish designer Dr Manel Torres who has spent ten years working on his invention.

In a video demonstrating how it works, he sprays a blue and white T-shirt on to a model in just under 15 minutes.

Drying as soon as it hits his skin, the garment can be taken off, washed and re-worn.

Dr Torres teamed up with Paul Luckham, Professor of Particle Technology at Imperial College London, to create Fabrican, which consists of cotton fibres, polymers (the plastics which hold them together) and solvents which keep it in liquid form.

When you get bored with your creation it can be dissolved and the material used again to make something new or repair old designs.

If nothing else, superheroes should appreciate the material. Apparently the only real drawbacks is that the shirts tend to smell a bit like the solvent which keeps the material liquid until introduced to the air, and they are so form-fitting that it might be a bit uncomfortable for some people without a great build. There's no word on what happens if you have any chest hair like myself.

However, there are a lot of other possible applications for this material besides tee shirts. Painting your walls down with this could give you instant wallpaper. It would work for quick, easy to apply bandages for any location, for covering tears in fabric, and even for modeling and design. You could even use it to attach things to someone like a diaper or your I Pod. And as one commenter at the Daily Mail pointed out, it would be handy for spray on camo as well, particularly with multiple colored nozzles and a computer control to generate the appropriate patterns.


The product isn't ready for sale quite yet but I'd expect this to be a big clubbing hit in the near future.
Posted by Christopher R Taylor at 7:31 AM