SONGS I LIKE: City Of New Orleans (Steve Goodman)

Good morning America how are you?
Don't you know me I'm your native son 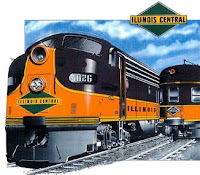 "City of New Orleans" is a song about a train. For some reason I tend to like songs about trains, and riding on them, for that matter. Trains are in my blood; my grandfathers on both sides worked on the Union Pacific. Several different singers have covered this song, with the most famous being Arlo Guthrie's 1972 recording.

It is a song about riding a long distance train and the impact it has on America, the activities on the train, and how central it was to culture and society at one time. Goodman played it for Guthrie who then put it on his album. I've heard a version of this that ends with a sad note; the trains are dying out in America, mentioning that the "City of New Orleans" will be soon gone.

Even the trains I took in the early 90s are gone with their wide, comfortable seats and large cabins. Now the passenger trains are smaller, less comfortable, with airplane seats you can't really sleep in and less style. The ride is a bit smoother and quieter, but it just isn't the same. And around the world, commuter trains only continue to run because they are subsidized by governments. Amtrak in America has to give way to freight trains (which still make a profit) because they run on the same tracks; the trains are never on time and take an awful long time to get to their destination.

Its sad because of how immensely important trains were to the formation of the country. Lincoln's dream of a train connecting both coasts as born in him because of a chance encounter with an engineer named Theodore Judah who laid out the line through the Sierra Nevada mountains. Without that connection and with how very long it took to get people and goods across the vast plains at the time, it is not inconceivable that east and west America could have eventually become two countries. With the train what once took weeks took days, at a fraction the cost.

For a different perspective on the rail barons and the history of the transcontinental railroad, I strongly encourage reading the Stephen Ambrose (the guy who wrote Band of Brothers) book
Nothing Like It In The World. As long as we have songs like "City Of New Orleans," we'll have the memories of what trains once were but I fear their era has passed forever.
Riding on the City of New Orleans,
Illinois Central Monday morning rail
Fifteen cars and fifteen restless riders,
Three conductors and twenty-five sacks of mail.
All along the southbound odyssey
The train pulls out at Kankakee
Rolls along past houses, farms and fields.
Passin' trains that have no names,
Freight yards full of old black men
And the graveyards of the rusted automobiles.

CHORUS:
Good morning America how are you?
Don't you know me I'm your native son,
I'm the train they call The City of New Orleans,
I'll be gone five hundred miles when the day is done.

Dealin' card games with the old men in the club car.
Penny a point ain't no one keepin' score.
Pass the paper bag that holds the bottle
Feel the wheels rumblin' 'neath the floor.
And the sons of pullman porters
And the sons of engineers
Ride their father's magic carpets made of steel.
Mothers with their babes asleep,
Are rockin' to the gentle beat
And the rhythm of the rails is all they feel.

Nighttime on The City of New Orleans,
Changing cars in Memphis, Tennessee.
Half way home, we'll be there by morning
Through the Mississippi darkness
Rolling down to the sea.
And all the towns and people seem
To fade into a bad dream
And the steel rails still ain't heard the news.
The conductor sings his song again,
The passengers will please refrain
This train's got the disappearing railroad blues.

Good night, America, how are you?
Don't you know me I'm your native son,
I'm the train they call The City of New Orleans,
I'll be gone five hundred miles when the day is done.

This is part of the Songs I Like series.
Posted by Christopher R Taylor at 9:25 AM

Great song, C_T. Many moons ago I played guitar weekly with a friend whose house was next to the railroad tracks, and we had a standing rule that whenever the train passed by we each had to play a train song. My two standard train songs were this one and Johnny Lee's "Cherokee Fiddle". I still play the Johnny Lee song every once in awhile but haven't played this one in probably 10 years. May have to try to dust it off!

Here are the lyrics to the "Cherokee Fiddle", a truly great train song even if it is associated with the hoaky 80's urban cowboy scene:

When he smelled the smoke and the cinders
Hes slicked back his hair and opened up his case
Played Cherokee Fiddle, he played it for the whiskey
Cause good whiskey never let him lose his place

When he smelled the smoke and the cinders
He slicked back his hair and opened up his case
Played Cherokee Fiddle, he played for the whiskey
Cause good whiskey never let him lose his place