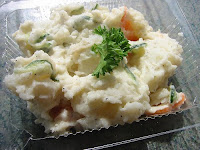 One of the things every man should know how to cook is mashed potatoes. Of course once you know that you'll need to know how to make gravy but that's a bit more complicated so it will wait for another post. Mashed potatoes is one of those basic rib-sticking recipes that make a good basis for a meal.

They're pretty simple to make, all you need is:

First, take some potatoes. You'll need two medium sized taters per man, minimum. Having some left over is good, in fact preferable, as you'll see in a moment, so more would not hurt. Peel the potatoes if you want, leaving the skins on is a fancier version but most people prefer them peeled. Chop them up into small cubes, about an inch wide at the most, but they cook faster and more evenly if you chop them somewhat smaller. Throw them in a pot and cover with water, add a few shakes of salt.

Boil that for a while; it varies by the size of the pot and the number of potatoes, but what you're looking for is a consistency of potato chunk that you can easily crush into the side of the pan, but not to the point the taters are disintegrating in the water. Drain them, and rinse off the potatoes you have. Let them sit while you get out a good sized pan that will hold them all and the rest of your ingredients.

Here's where it gets tricky because I never measure the ingredients (in fact, I rarely do with anything, so its interesting trying to estimate for these articles). Dump the potatoes into the container and add salt and pepper, about an eighth teaspoon per two person you're cooking for of salt and just shake pepper onto it to get a nice speckle on top. You want a teaspoon of butter per container melted in as well, but since that's a lot at once, cut it into four pieces and get ready to mix - don't melt it first, the hot potatoes will do that. I like to use a hand potato masher, but that isn't as even and unless you take a long time with a lot of patience and determination you get lumpy potatoes. Nobody likes that so you're better off with an electric hand mixer or a counter top job.

Mix the potatoes up at low setting, tossing in the four pieces of butter as you go. Now drizzle in some milk, about an eighth cup per batch. The point is to help the potatoes to be smooth and creamy, not moist. You want the mix to be as even as possible, so let it all blend in well. Don't mix at too high a speed or you'll get it all over the kitchen and yourself. If you blend it too long and too hard you'll break down the potatoes and it won't taste or feel right, so don't go crazy. Just mix up the ingredients smoothly. When you're done, slice off a bit of butter/margarine in the middle, sprinkle another speckle of pepper and a few shakes of salt on the top and you're ready.

You can add garlic, cheese, and all kinds of stuff to mashed potatoes but most people prefer them plain, with gravy.

Now, if you have leftovers, what to do? Well there are a few things that I like even more than mashed potatoes. The hard work is all done now, you can just do a few easy things and turn the finished product into something else.
MASHED POTATO SALAD
This one is pretty good as a side dish to surprise people (great at picnics too). Just take your leftover mashed potatoes, chilled, and mix in a few spoonfulls of mayonnaise, some chopped up onions and pickles (or relish) and some salt and pepper. The simpler the better, I figure, but here are some variants:

Essentially this is potato salad but smooth and creamy instead of chunky.

FRIED MASHED POTATOES
This is a tasty breakfast deal. Just take the mashed potatoes you have, mix in some onions, and fry it on a non stick pan with plenty of oil (or preferably butter/margarine). It will get golden brown on the outside and still mooshy in the middle. This one takes some skill because it is tough to cook right and turn as a solid. You can mix in an egg and some flour to make them hold together better, but I don't care for that as much. A bit of flour on the outside can help it hold up and not stick to the spatula though.

This is part of the Real Men Cook series.
Posted by Christopher R Taylor at 8:18 AM

You've probably tried this permutation, but if not you should include it the next time you make mashed potatoes. Roasted Garlic Mashed Potatoes is one of my favorite dishes in the world:

1) Take one entire bulb (the whole group of cloves) of garlic.
2) Chop off the top of the bulb approximately 1/3 of the way down from the stem.
3) Drizzle a couple of teaspoons of veggie or olive oil over the top of the exposed cloves. You might need to use your finger to spread it around and make sure the top is well coated... you don't want it getting crispy.
4) Wrap the bulb up in some aluminum foil and bake it in the oven at 400 degrees for about 25-30 minutes.
5) Let it cool off enough so that you can hold the bulb in your hand, turn so that the exposed cloves are facing down, and squeeze the top of the bulb so that you basically "milk" the cloves out of their skins (they will be very soft) and into the container holding your finished mashed potatoes.
6) Use your mixer to blend the roasted garlic cloves into the mashed potatoes, usually only takes a minute or two.

Eat and try not to lose consciousness from the incredible burst of tasty goodness you are about to experience.

The roasting process cooks and carmelizes the garlic so that it looses its harsh bite, and actually becomes somewhat sweet. Normal dishes with chopped up garlic kill my stomach, but roasted garlic doesn't seem to affect me at all.

I like it that way (and if you roast pretty much any vegetable it turns from good to explosively incredible) but my brother doesn't care for it, so I try to simplify things for him.

Yeah blame me for your desire to kill all vampires in a 3 million mile radius with your 80 cloves of garlic per ounce of food fetish. I like everything, in moderation it's the excessive use of one particular spice I am not fond of.