"If you want to be fully convinced of the abominations of slavery, go on a southern plantation, and call yourself a negro trader. Then there will be no concealment; and you will see and hear things that will seem to you impossible among human beings with immortal souls."
Harriet Ann Jacobs 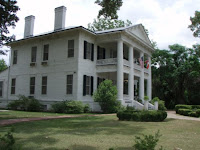 Glenn Reynolds has an interesting thought on Instapundit I wanted to expand on. He basically compares marxist dictatorships with life on a slave plantation:

...if you look at a Marxist Utopia — say, Cuba — what you’ll see is basically a plantation. At the top, you’ve got the Massa and his family — Fidel, Raul, et al. — followed by various layers of overseers — the Communist Party apparat, the secret police — and House Negroes — e.g., the state-controlled media — all living off the surplus labor of the Field Negroes, whose produce is disposed of not according to their own desires (that would be capitalism!) but according to their betters’. This, we’re told, is for the best, since they aren’t smart enough to make their own decisions anyway, and the Massa looks after them with food, housing, and health care. Slaveholders even defended their system as more humane and less exploitative than atomistic capitalism, conveniently ignoring the role of the lash, just as apologists for Marxism conveniently ignore the role of the gulag.

The Democratic Party member southern plantation slave owners were anti-capitalists to a large degree. This isn't surprising, as the strongest bastions of protestant capitalists were in the Northeastern US at the time. These southern plantation owners rejected the standard structures of capitalism for a top-down elite control of the economy, for the good of the people involved. They knew best, they understood how things worked. Those poor people needed someone to handle things for them.

It wasn't just blacks they viewed in this manner, although they considered blacks inherently inferior as human beings. The big south elite rich saw the general public as dirty, ignorant, and unable to rule themselves. It took a man of power and understanding to handle finance and business; this was an attitude they brought to the US from England and held strongly in their new land.

Indeed, to a large degree, many of the people in positions of power still hold this idea in the south, and for the Democratic party, most places. You're simply unable to do things right, you need those in power to make you do it, or do it for you. You don't have the judgment to handle things safely, they have to regulate the world to safety around you. You can't make it without the help of the government, you have to have assistance and special programs.

And in the end, back on the plantation you go: a slave of the state, obeying their will and being punished for questioning the master in the big house.

The tea party and that Glenn Beck vaguely spiritual rah rah America rally calling for a return to the greatness of the country? That's the voice telling you to run away.
Posted by Christopher R Taylor at 10:33 AM