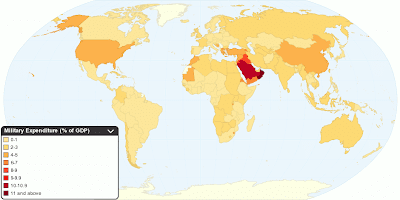 What's this? It is the world map with colors depicting military spending as a percentage of Gross National Product. The darker red the color, the more the spending. For example, Mongolia spends less than 2% of its GNP on military. Oman, on the other hand, spends more than 10% of its GNP on the military.

Given that the US is actually spending for almost all of Europe and is fighting a global war on terror, its military spending is fairly low compared to places like Russia and especially China who are doing neither.
Posted by Christopher R Taylor at 7:40 AM

I think GNP is a fairly poor measuring stick for military spending, or at the very least it is not good as a stand-alone measuring stick. If you can spend 2% of your GNP and get 10 times the military of the next best country, then it is irrelevant if they are spending 1% or 50%... they have a ways to go before they can catch up w/ you.

So I think this graph would have to give total dollars as well in order to be very useful, and I'm pretty sure we spend multiple times more per year on our military than the next best contender.

It also is likely relying on estimates or official reports from nations, which means some might be wildly inaccurate. Still its interesting to look at.