"People in the environs there were not hostile to learning; they just assumed that being a professor or writer was, and should be, not any different from welding or tractor driving."
It is not uncommon to read in left-leaning publications that President Obama is "professorial" and that he sometimes gets into trouble because he's too much the lecturing professor when he makes speeches. By this the writer often means that the president is being to academic and intellectual for idiot rubes in fly over country, but he's also right when he refers to President Obama as "professorial." Most of the Obama administration and indeed congress consists of this sort of person, such as Hillary Clinton.

These are academic types, filled with theories, ideas, and books they've read and discussed, without any real experience in real world business and interaction. For them, the concepts of Keynesian economics makes perfect sense because it seems to work on paper. They have a head full of ideas that makes them certain about how things work without experience actually trying things to find out if that's true or not. Even the ones who have had some small free market experience (President Obama's brief writing job in New York City, for instance) seem to have learned nothing from it. I'm reminded of the classroom scene from Back To School in which Rodney Dangerfield's character tries to explain how business works to a professor:

MELON: Oh, you left out a bunch of stuff.

MELON: First of all, you have to grease the local politicians for the sudden zoning problems that always come up. Then there's the kickbacks the carpenters. And if you plan on using any cement in this building I'm sure the teamsters like to have a little chat with you, and that'll cost you. Don't forget a little something for the building inspectors.

There's the long-term costs, such as waste disposal. I don't know if you're familiar with who runs that business but I assure you it's not the boy scouts.

Surely he overstates the bribes and criminal aspect, but at least some of that is real and the professor is interested only in theory. Now, in a classroom setting, that makes sense - you're supposed to teach theory in school, so people can then take that and apply it to life. When you're in a position of administration and leadership, theory isn't enough.

For a hard real life example of how this works out, consider this two-party essay on the "Stimulus" package by Brendan Wagner at Minyanville (courtesy Ace of Spades HQ). Wagner starts out by pointing to this graph: 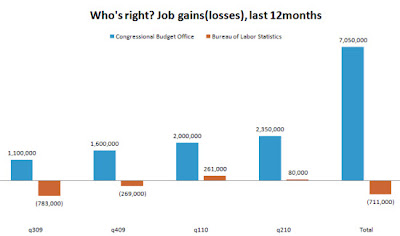 That graph shows the difference between Congressional Budget Office (CBO) estimates on job gains under the "stimulus" package and job losses as reported by the Bureau of Labor Statistics. That's quite a discrepancy, eh?

He goes on to explain how on earth they could be so different:

The original document outlining job creation estimates is no longer available on whitehouse.gov. It was replaced with an “updated” document three pages shorter and without the industry-specific job targets originally outlined. Christina Romer, the now-departed head of the Council of Economic Advisors, wrote the original report based on the private-market analysis done by Mark Zandi of Moody’s. Like most economists, neither of these two have experience with spending multipliers, unlike Harvard’s Robert Barro, whose research suggests their multipliers are at least 100% too high.
...
The most direct reason for the failure of the ARRA was the overly optimistic algebra in its predictions. In order to estimate the job impact of proposed fiscal stimulus, economists multiply government spending by a certain number to extrapolate GDP, and then from there attempt to predict jobs. In the original document predicting ARRA jobs, President Obama’s economics advisor Christina Romer used a multiplier of about 1.57. The Congressional Budget Office used a multiplier of about 2 in its estimate of 2 million jobs created in the fourth quarter of 2009. Harvard Professor Robert Barro estimates that the actual multiplier for World War II stimulus spending was .8, so he uses a lower estimate for ARRA spending of .6. Romer assumed that filling state budget gaps in education and transportation would have doubled the stimulus affect of the industrial buildup around World War II!

In other words, the Congressional Budget Office estimated a theoretical benefit from the "stimulus" spending, then declared that to have been true and built their estimates on that. The result is outrageously overstated benefits which are in direct contradiction to reality. And, as Wagner notes, while the original statements about the "stimulus" package claimed that 90% of the jobs created would be in the private sector, in actuality, 95% were in the private - government - sector, and many of them temporary positions under the census gathering effort.

How can people have such a mistaken understanding of reality that they are so very much off the mark? A recent column by Victor Davis Hanson helps explain:

So what did I learn in the university? I’ll try to be a bit less specific than I was in Who Killed Homer? written over a decade ago.

First was the false knowledge — odd for an institution devoted to free inquiry. The university runs like a 13th-century church in which the heliocentric maverick is a mortal sinner. So too on campus the Rosenbergs never spied. Alger Hiss was a martyr. Mao killed only a few who needed killing (see Anita Dunn on that one).

Che was not a murderous thug, but a hair-in-the-wind carefree motorcyclist. Minorities supposedly died proportionally higher in Vietnam — as they supposedly do now in Iraq and Afghanistan. Women are underrepresented as both undergraduates and as humanities graduate students. Anyone with an accented name obviously had picked grapes or was denied voting rights. Adlai Stevenson was an American saint, even more so than George McGovern. Only the unhinged even discussed doubts about global warming. Don’t question any of the above; it was all gospel — as we see now in D.C., from Keynes to Gorism to Cordoba as the beacon of Islamic tolerance during the Inquisition. (Doubt any of that, and that laid-back elbow-patched joking prof who told the class “Call me Bill,” in a flash, Gollum like, turned into a snarling jackal, screaming, “I am Doctor Jones, with important publications on climate change and a doctorate from Berkeley! How dare you question me!”)

He also notes a lack of perspective born of a fairly easy life and a lack of hardship. Professors do not generally come from a coal-mining family or ditch diggers. They have rarely spent their summers tarring hot rooftops when its 107 degrees in the sun. They haven't worked a factory line or picked berries. For them, having to jump start their car in graduate school and teaching an 8:00 AM class is exhausting drudgery and hardship. Its not that this kind of thing isn't troubling or hard in its own way, but in perspective it becomes a bit meaningless (see the Dead Kennedys song "Holiday and Cambodia" for more thoughts on that).

Hanson writes about envy as well, how the professor grates at being paid less than flashy jobs or other degrees but considers their calling a noble, altruistic sacrifice. At the same time, they believe, deep down, that they could have been a big time Wall Street wheeler dealer, a shopping mall engineer, or a brain surgeon, but they simply chose their work out of the goodness of their heart and love of learning.

And all of that helps understand why and how the Democratic leadership - and particularly the Obama administration - comes to the conclusions it does. It isn't that theory or ideas are wrong, its that they are wrong in the place of experience and real world testing. Professor Obama is certain that being nice to our deadliest enemies made up of monsters and tyrants will make them hate us less, while England is a horrible place filled with ghastly racists who have a history of oppression despite being our staunchest ally and a world leader in liberty and democracy. He's certain that taxes will bring prosperity, government can control the economy for everyone's benefit, and that some people make too much and ought to be forced to give it away. President Obama is convinced that socialism will work this time because he and his cabinet are so darn smart and learned that they can get it right when everyone else has failed.

And he's certain of that because he believes the theory rather than the reality. And when there's a conflict of information, he picks the side which agrees with his predispositions best. Megan McArdle recently wrote about that in The Atlantic, noting that if you try, its quite easy to find the answers you'd prefer or expect. Quoting from Keith Humphreys about wildly mistaken - yet popular in academic and leftist circles - Maslow, McArdle posts:

But he was also influential because his theory told many of the cultural elites of the era that they were objectively more mental healthy and more psychologically developed than were their opponents. Flattering poppycock, and also dangerously undemocratic.
...
Maslow did what Kolhberg did in his theory of moral development and Rollo May and all the existentialist psychiatrists did in their theories: He asserted that the objectively highest state of human development was to be like him and like people he admired.
...
Maslow wanted to give an objective validation that, for example, the Viet Nam war protestor was objectively superior to the Viet Nam general, the environmentalist was objectively superior to the captain of industry etc. Many cultural elites ate it up, just as Soviet elites ate it up when their psychiatrists said that anyone who didn't love the government was mentally ill and needed electroshock treatment post-haste.

And in the end, that's what the Democrats are doing: they have their ideology, and reality be damned because this appeals to what they want to be true. If it fails, why then it is not time to rethink your position or reassess how well your theory matches reality. No, it is time to find someone to blame for why your perfect ideas didn't work. It's impatient, childish, whiny Americans, its President Bush who made things so bad it will take more time, its evil conservatives in a vast right-wing conspiracy, its always someone else.

And as these people treat the world and the American economy and policy realms as their petri dish to try out their greatest theories cooked up around a circle of friends Friday night at the dorm, the faculty lounge, and the fern bar, real people facing real life experience real suffering. This cycle happened once before under Hoover and Roosevelt, and now we're seeing it again under "violate free market principles to save it" Bush and Obama.

And unsurprisingly, people have had enough. Because if you cannot adjust your theory to deal with real world problems and real world exceptions, you are not worthy of any leadership position.
Posted by Christopher R Taylor at 8:31 AM