"What's up with obsession about O'Donnell's opinions on sex?"
-Kristin Powers 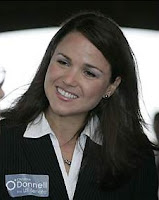 I apologize for the title, but its catchy and very descriptive. What is "nuts and sluts?" That's the term William Jacobson at Legal Insurrection came up with to describe the left's tactic to attack female conservatives:

That is the mode of attack Democrats use against conservative women. Sarah Palin is the prime example, as she routinely is called crazy and is sexualized by the left (to the silence of liberal feminist groups).

Its a good term, one that originates in companies attempting to defeat a sexual harassment lawsuit. Consider: what's the complaint about every single major female conservative or political figure? Crazy, kooky, straaannge. And if they're attractive (which almost all of them are), they are sexualized.

The entire thrust of Nevada GOP candidate Sharron Angel coverage has been to call her an extremist, repeating that term continuously for months until it started to catch on.

Coverage of Christine O'Donnell has followed this pattern predictably as well. Consider the New York Times piece on her, starting with these lines:

Then there's Salon.com about O'Donnell:

Breaking: Christine O'Donnell has had sex
The GOP's Delaware embarrassment wasn't always so chaste, as she revealed in 2004 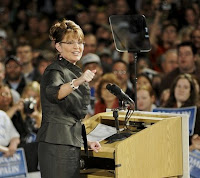 What's this? A Christian having sex? Inconceivable!

You can watch and see this pattern being repeated. GOP males are generally called idiots (and they've done that with Sarah Palin), but the women? Nuts and sluts.

Good luck with that approach and voting moms, Democrats.
Posted by Christopher R Taylor at 8:20 AM

The thing that really bothers me about how Tea Party conservative women get treated is the way their general social views about society are extrapolated by the media to represent their legislative agenda. I understand WHY they think this, because to a liberal anything you think is right or wrong needs to have a law supporting your belief... but the fact is that a socially conservative woman who thinks masturbation is a sin and therefore shameful can hold that belief while having absolutely no desire to address it via the government. The media almost always fails to make this very important distinction when reporting on the religious worldview of candidates like Angle and O'Donnell. It's true that part of the very fabric of the Tea Party movement is a desire to change both our culture and our government, but there is a lot of misunderstanding out there, especially amongst liberals, about how those goals should be intertwined.