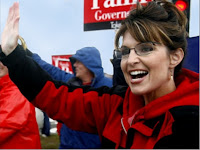 As of this point, whatever opinion you might have of Sarah Palin, its clear she's one of the most powerful figures in the Republican Party. After sweeping clear the old guard GOP out of Alaska last night, she's proved to be a very reliable kingmaker and is a huge draw at any speaking event.

Its interesting the divide she causes. Most people on the left consider Sarah Palin an idiotic fluff headed cheerleader lightweight, an imbecile who can't even talk right and a hick. Most people on the right find her charming, fascinating, and very well spoken. It seems to me that there's two basic causes for this:

1) Confirmation bias. For the left, she's a conservative, and thus must be some mouth breathing cretin. For the right, she sounds conservative and so she's liked for what she says.
2) Culture bias. For the left, she epitomizes rural America, with her speech patterns, life style, clothing and actions. For the right... she doesn't epitomize urban America; both sides agree, but each one has a different perspective on what that means.

In essence, Sarah Palin is the physical embodiment of the divide in America, and while the press and popular culture have managed to turn her into an idiotic caricature so effectively that most independents don't think much of her, everyone is going to have to start taking her more seriously, including me.

*UPDATE: Let me expand on the divide theme a bit with a shirt image courtesy Tim Blair's blog: 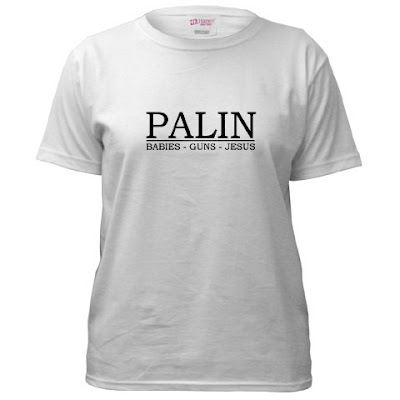 Now, for some in the US, this shirt is awesome, representing core values and ideas of they've grown up with (especially women). For some the shirt is ironically hip and satirical: look at what this hick beleives in!

Think back to November 2008 when Sarah Palin was interviewed on TV about thanksgiving in front of a turkey slaughterhouse. The left thought it was just awful she was seen talking about turkeys in front of a place where turkeys died, it was gruesome, someone with real class would not have even allowed that camera shot. Others in America shrugged and thought "what's the big deal, you figure they're born in that plastic package with the pop up "done" button in them?"

Sarah Palin may not be terribly impressive as a person, she may be no good as a politician or leader, but she's a perfect icon of the cultural divide in America: the secular leftist urban elite, and the rest of us.
Posted by Christopher R Taylor at 8:37 AM

I'll continue to take Palin as seriously as her rhetoric and posturing indicate she deserves. I think she is an excellent operative within the movement, but I like her less and less as a professional politician. I think you are correct that she represents the cutural divide between the urban and the rural, but I sometimes think there are an awful lot of suburban conservatives who project their idea of rural culture onto Palin. A lot of Palin's persona is actually much more "modern suburban professional woman" than country gal, but since she hunts and is from Alaska it is easily spun as being rural.

I agree that she's more a suburban mom and not as rural as people think, and I don't consider her as great as some conservatives.

Yet she does represent the divide well and people's perception of her are an expression of this divide. The left thinks the divide is between educated, secular, caring people and heartless, creationist Jesus-freaks but they're out of touch with the bulk of the country.

Sarah Palin is religious, but not very much so. She's not a very strong social conservative at all, really.

She's right where Reagan was, hated by the media/left and the country club republicans. No one debates her/Reagan on policy, only style. But, we knuckle draggers in flyover country listen to what she says, not what tina fey says on her behalf.I don't give a damn about sitting at "the cool kids lunch table", I'm a Sarah fan.

Actually, Lance, when he picked Palin he immediately got like a 5 point uptick in the polls. What killed him was an idiotic response to the banking crash.

I think she's not presidential material, but she's not the retard leftists seem to think.