GOATS AND THEIR MONEY

Watch out for false prophets. They come to you in sheep's clothing, but inwardly they are ferocious wolves. By their fruit you will recognize them. Do people pick grapes from thornbushes, or figs from thistles? Likewise every good tree bears good fruit, but a bad tree bears bad fruit. A good tree cannot bear bad fruit, and a bad tree cannot bear good fruit.
-Matthew 7:15-18 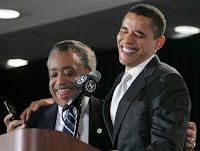 He's the kind of black "leader" that people dislike and distrust, the sort of guy who's perfectly willing to lie in order to gain personal power, at the expense of property damage and even lives such as in the Tawana Brawley incident which brought his initial fame. He's the sort of man who lives exclusively upon the donations of others, sometimes wrenched from their hands by racial blackmail and extortion to stop protesting and damaging business.

Like the TV evangelist who preys on the sick, elderly, lonely, and depressed, taking their money and wishes with false theology and deliberately fraudulent claims of health, wealth, and happiness, Sharpton is a man who uses the name of Christ for his personal gain in the worst kind of crass, cynical manner.

And, like most of his kind, he's not real careful about taxes or bookkeeping. For him, paperwork is for someone else, he's the kind who doesn't care about how much money is coming in or what debts are owed, because he's always walking around looking for someone to put money in his pocket for a minimal amount of work.

And now, it appears that finally the tax man is starting to catch up with him. Carl Campanile writes in the New York Post:

An accounting firm hired by Al Sharpton's National Action Network found the civil-rights group in such financial disarray that it flunked its record-keeping -- and may not even survive, The Post has learned.

The scathing critique was spelled out in a hard-hitting internal audit of NAN's books, a copy of which was obtained by The Post.

"The organization has suffered recurring decreases in net assets -- and has been dependent upon advances from related parties and the nonpayment of payroll tax obligations -- to maintain continuity," the firm KBL concluded in an April 2 audit of NAN's 2008 financial records, the most recent available.

KBL said it was "unable to form an opinion" on the accuracy of NAN's financial figures "because of inadequacies in the organization's accounting records."

The audit said NAN still owed $1.348 million in delinquent city, state and federal taxes and penalties at the end of 2008. The IRS has filed dozens of liens against NAN over the past decade, including one as recently as April of this year.

Sharpton's group isn't paying its taxes, isn't keeping proper books, and is financially insolvent. Which likely explains why Sharpton ran for president; not because he had any conceivably realistic chance of winning, but to get that sweet campaign finance cash and a greater public profile for donations. Yet, as a commenter said at the NYP site "I'm shocked that Sharpton's front even pretends to maintain books and records."

Oh, and that's not all. They're in trouble with more than the federal government for FEC and tax violations:

Meanwhile, the audit found that NAN was a defendant in five lawsuits:

Mind you, Attorney General Eric Holder has made it abundantly clear that he's more than willing to close a case and ignore justice if a black person is involved.

What sort of black leader and preacher do I like? The same kind as white, brown, red, purple, and any other sort: the kind that works hard to do justice, loves mercy, and walks humbly before the Lord. The kind you never hear about because he's more busy doing what is right than getting in front of cameras.
Posted by Christopher R Taylor at 9:14 AM