FREE TO BE STUPID 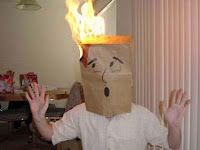 When Pastor Terry Jones decided to have an event burning Korans on 9/11 to make a statement, many people were quite upset and outraged. However, as Richard Cohen recently wrote in the Washington Post, part of being America is letting people do stupid, pointless, and even offensive things. That's the price of liberty:

Jones is neither a great man nor the leader of a great cause. But what he wanted to do was both permissible under our system and, in a sense, valued.

Valued not because it was in any sense proper or good, but valued in a sense of being freedom of speech. In America, you can burn the Koran. You can't do that in many other places, even some countries otherwise believed to be free. Freedom of speech is very important to the United States, it is one of the most beloved and critical of liberties.

However, there are limits to our expression of the right to freedom of speech (or, more broadly, expression). The classic example is someone yelling "fire" in a crowded theater, which results in panic, loss of revenue, and even injury among the people present. Perjury, libel, and slander all are limits on the expression of our right to free speech Another classic example is the concept of "fighting words;" things said that are so very offensive and extreme that an ordinary person cannot help but become so upset that violence results.

Justice Bryer of the US Supreme Court recently spoke of the Koran burning episode on Good Morning America with George Stephanopolous:

Last week we saw a Florida Pastor – with 30 members in his church – threaten to burn Korans which lead to riots and killings in Afghanistan. We also saw Democrats and Republicans alike assume that Pastor Jones had a Constitutional right to burn those Korans. But Supreme Court Justice Stephen Breyer told me on "GMA" that he's not prepared to conclude that -- in the internet age -- the First Amendment condones Koran burning.

In the "crowded theater" principle, the idea is that the free expression of rights only extend as far as they do not interfere with or damage other people's rights. In a society, people may not do whatever they wish whatsoever without sanction no matter how free they are; there are laws against murder, theft, and so on. You cannot use your free speech to maliciously and deliberate cause material damage to others.

Breyer proposes that perhaps burning a Koran is something which causes such damage, an act so offensive or destructive that it crosses the line between freedom of expression and malicious misuse of liberty. Is he right, can you burn an American flag - or the Bible - but not the Koran?
To understand this, we have to consider why he might come to this conclusion. It is no secret that there are some Muslims in the world so easily offended and willing to cause damage that anything they consider blasphemous and offensive must be met not with mere disapproval, but violence, rage, and even blood. For such people, burning a stack of Korans would result in rioting, burning, and even killing and setting bombs. What's worse, the act by Pastor Jones's group would so upset and hurt Muslims in Afghanistan, for instance, that they might be less willing to trust or assist the coalition in fighting Taliban terrorists and radicals. This makes the rebuilding effort in Afghanistan and the "counterinsurgency" strategy much more difficult, thus costing additional lives of soldiers and Afghanis.

However, I would argue that there's a significant difference between burning a book which upsets some people and making a statement so provocative and extreme that the average, reasonable person cannot help but react in a destructive manner. The reason crying "fire" in a theater is so damaging is that people will panic out of the need to get out before they are killed. And that's the critical point Breyer seems to be missing: the average, reasonable person.

By his argument, any act which a group of people decide is so horrible they must take violent action in response is not protected by the first amendment. Not the average, reasonable person but any group of people, reasonable or not. Consider the implications of this idea, which would include these sorts of situations:
Each of these situations involve a small group of irrational people reacting in an extreme manner because something is done they consider too outrageous and offensive to permit. Each of them is the same sort of situation as a radical Muslim going berserk because someone burned a Koran. Each of them, according to Breyer, is a response which by his argument should legally ban the actions which precipitated them. Blacks may not marry whites. Synagogues may not be built. TV shows may not glorify childbirth. And on and on.

Now as to why he'd make this mistake, I can only speculate, but given Justice Breyer's past decisions and arguments, it seems to be based less on judicial prudence and logic than on modern leftist cant: do not upset the Muslim, for he is a protected minority. Perhaps he simply was thinking out loud; certainly I suspect he'd have a hard time convincing any of his fellow Supreme Court justices of this position.

Yet in order for the United States to continue and prosper, we have to defend even the rights of idiots to do really stupid things, despite its stupidity. Liberty involves things you don't like or think are foolish being done by your fellow citizens, this is the true nature of tolerance. No one tolerates what they like or appreciate; it is always a negative.

Yet tolerate we must, to maintain liberty in our republic. Oddly, Justice Breyer does not seem to understand this basic principle, and for the United States to continue as the founding fathers envisioned, understand it we must.

Larry King: There's no doubt that Pastor Jones, little church in Florida, had the right, he has the right to burn the Quran, doesn't he?

Breyer: Yeah, I said it depends on what analogy you use, but the most one analogous case is that there was — you have the right to burn an American flag as a symbol.

So at this point he seems to be arguing that it would be protected by the first amendment.
Posted by Christopher R Taylor at 7:59 AM

Great post. Yes, the thing that immediately struck me about Bryer's point was that, if logically applied, you could quite legally shut anybody up about anything simply by threatening violence if they don't quit saying or doing what you don't like.