"What the press found superlative about its Katrina reporting was the realization — very comforting post-RatherGate — that if they all agreed on a storyline and pushed it, they could still move the polls despite the alternative media. That the reporting was crap didn’t matter at all."
-Glenn Reynolds 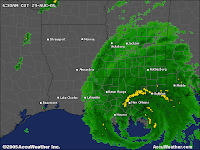 August 29, 2005 the hurricane known as Katrina made landfall in the United States not far from New Orleans. When the storm finally cleared away, almost 1500 had died and president Bush had gone from war hero to generally disliked and distrusted, particularly by the minorities who had voted for him in greater numbers than for any Republican president in decades.

In the two months of August and September, a frenzy of media and pundit commentary and coverage portrayed this hurricane in a series of exaggerations, myths, and absurd misstatements which can barely be seen as anything but deliberate lies. President Bush was declared a failure, he was said to "hate black people," he was said to have deliberately delayed aid and slowed emergency response.

Democrats and leftists wasted no time using the events to attack President Bush, desperate to damage his soaring popularity and the political power of the Republican party. Celebrities, politicians, and anyone who could hurt Republicans and could get a camera spoke out loudly, inventively, and generally without any semblance of reality.

Joseph Campbell notes the praise which was heaped on Hurricane Katrina reporting:

Five years ago this month, a few weeks after Hurricane Katrina battered the Gulf Coast and left much of New Orleans under water, former CBS anchorman Dan Rather went on Larry King Live to extol television’s coverage of the deadly storm.

Rather, whose early career had been propelled by covering hurricanes, was extravagant in his praise, saying the Katrina coverage was “one of the quintessential great moments in television news,” ranking “right there with the Nixon/Kennedy debates, the Kennedy assassination, Watergate coverage, you name it.”

The coverage, Rather declared, was nothing short of “landmark.”

Over the years, these myths have persisted despite media retractions, which isn't surprising. When the media makes a report, it gets the front page. When they make a retraction, it gets a few lines a few pages deep, buried. Who likes to tout their own failures and mistakes? Their errors aren't news, the legacy media figures, so why push them? And besides the myths were useful.

Here's a few things the legacy media and leftist sites such as the Huffington Post reported, events which were laughably false and easily confirmed, but ran without checking:
Even more lurid reports from "man on the street" interviews were taken without comment or any attempt to counter their hysteria. Bombs from helicopters hitting the levees. Mass graves of blacks being bulldozed under by the government. Deliberate efforts to stop blacks from evacuating. In the process, the reporting made the people of New Orleans look worthless, barbaric, and sub human - especially black citizens who made up the bulk of the area flooded. Tales of uncontrolled crime and cruelty spread wide. Some of these unhinged stories were told to congressmen who sat and seriously nodded, playing to the cameras as bizarre tale after outrageous fantasy was related by a parade of people picked to make Republicans look as bad as possible.
Meanwhile, stories of many of the atrocities went unreported. Why? Its hard to say, but there is one common theme: they were all done by officials or public servants working for Democratic Party officials and politicians. The bridge out of New Orleans leading to Gretna nearby was blocked by police. Cops were ordered by mayor Nagin to shoot looters, pulling 1500 police off search and rescue work to control the chaos the news was reporting. Guns were seized from citizens without cause... unless they were the bodyguard of someone powerful and wealthy.

The narrative of a city gone mad and horrendous suffering because of President Bush's slow and inadequate response caught on, repeated without question or analysis by news program after talking head. And all the while, anyone not a Republican involved was carefully protected by the press, even if they had to change the facts to fit the narrative.

It worked. The truth eventually started to come out as in the months after the storm retractions were issued and more serious investigation (such as Gary Younge in the UK Guardian) but the public mood was set and the myths took root. Retractions were ignored or never seen, and the myth busting by a few reporters never got the coverage that the myths got.

The next year, Democrats took congress, and President Bush's high popularity poll numbers dove down and continued to drop for the next two years. His political capital was destroyed and he could get little done. The Katrina story was so useful a weapon that even two years later animosity toward President Bush and the Republican Party was so strong the Democrats took control of congress so powerfully that the GOP was incapable of blocking any legislation or having any voice whatsoever.

Five years later, people still believe the myths, and unless we all take time to find out about them and counter them, they will become established common knowledge which is often faulty but always very difficult to challenge.
Posted by Christopher R Taylor at 8:29 AM

While I agree with many of your myths I'll throw a couple more in there but to say the Bush's response was not slow and inadequate is a boldface lie.

It is a fact that FEMA was not even aware of the thousands stranded with no food or water at the Convention Center until the national media notified them 3 days after Katrina.

It is a fact that many of the National Guard in the Superdome were extremely upset at their Commander in Chief for lack of assistance and for having far too much of our service people and equipment in Iraq at the expense of our own emergencies.

A video and transcripts were uncovered 6 months after Katrina that clearly show President Bush being forewarned by Gov. Blanco, the Head of the Hurricane Center, and the Head of FEMA that the levees might be breached and that this storm was very likely to be devastating. Bush seemed indifferent, said everything was taken care of and days after Katrina stated that "no one could have foreseen the breach of the levees." This video showed him caught in a lie and fully warned.

And those 100 flooded busses that people say could have saved us? Well only about half were operable before the levee breaks and those who drive them are local school bus drivers who evacuated with their families.

Finally few know that the Airport, Amtrak, and Greyhound shut down a day before the evacuation. Many of us could not get out.

Most everyone was spreading false rumors including Republicans, Fox News, and even those of us in the Superdome.

Paul Harris
Author, "Diary From the Dome, Reflections on Fear and Privilege During Katrina"

So what you're saying is that you believe that the Superdome effort was inadequate but speed was not an issue. Thanks for the clarification.

As for the levees, I'll have to chck that out. I know the day before the hurricane hit, President Bush urged the city be evacuated by law, and Mayor Nagin declined to take any such action.