“Americans must choose between allowing continued high levels of immigration and creating a sustainable society.” 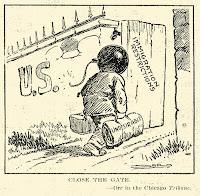 One of the things that stood out in lunatic James Lee's writings was that he was opposed to immigration. That made a lot of people scratch their heads and some particularly dim intellects on the left took that as proof that he was some kind of right wing extremist despite his other writings that were plainly leftist.

What does immigration have to do with environmental issues, which Lee was so driven by he strapped what looked like a bomb to his chest and threatened the Discovery Channel with? An article by Caroline May at the Daily Caller helps explain:

In 2009, Philip Cafaro and Winthrop Staples III published a report which examined the detrimental environmental effects of immigration to the United States, specifically the vast increase in population. “At the current level of 1.5 million immigrants per year, America’s population of 306 million is set to increase to over 700 million people by 2100,” they wrote, indicating that an increase in population would be more of a strain on the ecosystem. “Conversely, scaling back immigration to 200,000 per year would greatly reduce America’s population growth, according to studies by the U.S. Census Bureau.”

But why does it matter if more people come to America? They are living somewhere before they get to the US, they are having kids, what's the problem with immigration here? Mark Krikorian at the center for immigration studies answers:

Immigrants come to America to improve their standard of living, thereby embracing much of what the green movement decries: cars, air conditioning, plastic baggies, etc. “The whole point to immigrants coming here is to increase their carbon footprint,” Kirkorian explained. “That is why they come here. But if your starting point is that that is a problem, how can you justify a national policy that’s significantly increasing it?”

And immigrants tend to have more children than long term US citizens. After a few generations the imperative to have large families decreases and the overall population growth lowers among people who've lived several generations in western culture. That means immigrants produce more people, consume more goods, and generate more carbon than long term residents, and when they move from a third world nation to the US, they begin polluting more (in the eyes of the environmentalist) by using cars and air conditioning and so on.

In other words, for the climate alarmist, immigrants are a very bad thing. And that's where guys like Lee got their ideas, along with Al Gore's snake oil power point show An Inconvenient Truth. To them, the doom is so certain and the threat so great that they have to take extreme action to save us all. And in that, I have to sort of respect their attitude. They're insanely wrong, but at least they're consistent.

While Al Gore buys gargantuan energy-consuming homes and flies around the world, driving in limos, or Barbara Streisand buys coast-eroding mega mansions and huge cars, boats, and so on all the while lecturing us on how we should change, a guy like James Lee walked the walk. Wrong, insane, and criminal, but at least the man had integrity.

What's interesting is how the left is conflicted on this issue. Mark Krikorian notes that

“Open borders and immigration are an immutable value of the left,” Kirkorian concluded. “It doesn’t matter what your particular issue is or your constituency; they have to be sacrificed if their interests conflict with open borders. And you see that with the environmentalists as well as labor, African Americans, feminists, and others.”

And he's right, it seems when your pet cause conflicts with some greater cause of the left, its time to ignore that and take one for the team. Big Union should be greatly opposed to illegal immigrants and the cheap labor they bring, replacing union guys. But since open borders and immigration is a leftist issue, they oppose every effort to limit immigration to legals only.

For guys like Gore, the money they make and the prestige they gain from this issue outweighs any desire to personally follow through on their demands for others. For these other groups, especially Hollywood types, money isn't even a driving force. They've just got an inconsistent, self-conflicting ideology that they have neither the integrity or the intellectual firepower to hold true on.