“The big problem is to find suitable hats. I don't care for them all that much, but you have to wear them in politics.”
-Maryon Pearson
Did you know...

There's a story that's told often - one I believed until very recently - about hats. I like hats, I think they give a man character and a woman beauty if they are rightly worn and designed. Hats force a man to remember where he is and who is nearby, and remind a lady who she is (tip it to the lady, take it off indoors). Hats look good and give a man a different level of style than he's normally able to achieve. They went out of style in the 1960s, and the story goes like this:

President Kennedy was the first man to go bare headed to his inauguration and he was so wildly popular and considered such an icon of youth, health, and style, that men instantly threw their hats away and never again wore them.

There are a couple of problems with this story. The first is something that's bothered me a while now: President Kennedy wasn't really all that hugely popular. He won the popular vote by 34,220,984 to 34,108,157. Richard Nixon actually won in more states than President Kennedy did: 26 to 22, they just had slightly less population. President Kennedy was idolized by the youth and the left, but they weren't a very large force in America at the time. In fact, many analysts believe he probably would have lost in 1964; he wasn't a very popular president until he was killed. So why on earth would man en masse around the world abandon their hats because of this one man's action?

The second problem is this: 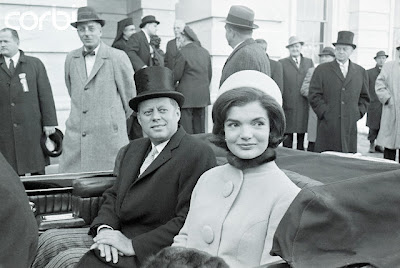 That's a picture of newly-elected President Kennedy on his way to be sworn in as President of the United States. It isn't a photoshop, here's a couple more:

Why the top hat? It was tradition that presidents wore a top hat to be sworn in; it was part of their outfit for the inauguration. Why? Just one of those things that happened. A top hat was required for very fancy dress for men, and this was the finest event in a president's life. So you dressed up, and it just carried on into the 60's. President Johnson was the first one to not wear the hat. Personally I think President Obama would have looked pretty good wearing a top hat.

Why did men stop wearing hats? Well hair styles changed, hair products changed, and fashion changed. Men washed their hair more often, they had longer hair that was poofier and they wanted to show it off. Hats mash your hair down and make it look awful when you take the hat off - unless you have really short hair or grease it down so it isn't mashed. Men just moved away from hats, it wasn't Kennedy at all.

For more pictures of presidents in top hats, check out the Huffington Post's special on the topic.

**Welcome American Digest readers! Also consider looking at my earlier post on hats and their glory.
Posted by Christopher R Taylor at 10:54 AM

I think the biggest reason for the decline of the hat is that we just quit spending as much time outside. It does seem like they are making a comeback though, even beyond the simple baseball cap.

I still wish the Stetson would make a big comeback though. I think they look good and are the most utilitarian of brimmed hats (fedoras often don't give you enough brim to keep the sun off your neck, while a sombrero tends to be so big as to be inconvenient). I wear mine out every once in awhile, and even here if rural Oklahoma it is increasingly unusual to see a young man in cowboy hat (plenty of old men still wear them).

Every man looks good in a stetson, even I look good in one.

I refuse to believe that I would look good in a stetson. My head is huge.

You could wear a hat like Hoss, remember they always had Hop Sing.

I read once (but forget where) that lower auto rooflines had something to do with the decline in hat-wearing, too. I wear a fedora regularly (in all but high winds), and I can tell you that in today's cars it's not hard to knock yer own hat off if you're not paying attention to how you get in and out of the car.

You know I bet that did contribute to it. Hipsters would buy sleek low convertables and even a

...even a riding cap would not stay on well at high speed. Having worn a fedora a while I remember how it was a learned skill not to knock it off my head and get it in the way when doing things.

I've gotta go with P.J.O'Rourke on this issue. "A man should remove his hat when greeting a lady and leave it off for the rest of his life."

My own personal take is that women look great in hats, men look dorky.

My girlfriend thinks that I look great in hat, but she doesn't. I think she's right about me, but wrong about herself.

I have Stetsons, motoring caps, a Panama, assorted others, and a new one that gives me a look that reminds me of Bear Bryant. I like them all, except for the ball caps.

I've been in exactly four knockdown, dragout, fistfights in my life. I didn't start the fights but every time I was wearing a hat. Always a Steston, Bailey or Resistol felt cowboy hat. I quit wearing nice hats. Ballcaps don't seem to provoke the same reaction, though.