WHATEVER HAPPENED TO SUSAN BONES?

"My aunt says you can produce a fully corporeal Patronus, is that true?" 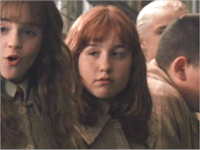 I just watched the first Harry Potter movie again last night, and it was as enjoyable as ever. Some dislike and criticize Christopher Columbus' directing but I have always thought he was the best of the Harry Potter directors - the most true to the books, and the best at capturing the wonder and fantasy of the stories.

Yet something occurred to me that I'd thought about before, but forgotten. Where did Susan Bones go? She's the cute little redhead you see in the boat with Hermione Granger, she's the first person in the new class to be sorted (into Hufflepuff) by the sorting hat. She ends up one of Hermione's friends, and ultimately is in Dumbledore's Army in the fifth book Harry Potter and the Order of the Phoenix. Played by Eleanor Columbus, she was only in the first two movies, then vanishes. She's never mentioned again after her appearance in Harry Potter in the Half Blood Prince when she "splinches" (mistakenly mis-teleports) her leg off. She's in the video game series which much more closely follows the books.

So what happened to her character? The entire sequence of learning to "apparate" or teleport was dropped from the Half Blood Prince movie. She never has a line in either of the movies she appears in, although she's still working in movies (her last part was in Rent, she started out as a baby in Home Alone 2). Did she get tired of the part? Was she edited out of the movies for lack of time, like much of the later books? Was she too cute compared to Ginny Weasley and took attention away from what Rowling wanted as a major character? One hint I read about might help explain: she's director Christopher Columbus' daughter. When he was yanked off the series and it was given to other, darker directors, he might have taken his daughter with him and they just wrote the character off, so much so that by Half Blood Prince, her lines in the book are instead spoken by Luna Lovegood.

Sure, this isn't real important and is pretty geeky but I do wonder. I can't find any information on the internet about what happened, and I wonder what she looks like mostly grown up.

The answer appears to be this: Eleanor Columbus was the only American actress on the set. All the rest of the actors in the entire movie series are from the UK. When Christopher Columbus came on to direct the first couple movies, he seems to have used his position to insert his daughter in a role. She has no lines, probably by J.K. Rowling's demand (she probably insisted on an all-UK cast, reasonably so). Given that most Americans can't do a decent brit accent (just like most Brits can't do a decent American accent), that probably wasn't such a bad decision. When Christopher Columbus was replaced, he either took his daughter with him or they dumped her for being a non-UK actress, and since they are using exactly the same actors for every role (except Dumbledore: Richard Harris died and was replaced by the very capable Michael Gambon) the character was just written out.
Posted by Christopher R Taylor at 8:36 AM

I think this too, and, on the fifth movie, his name appear on the Hermione's Club Parchment, but not on the scene, well, he she could not write his name without appear in the scene's place.