THE PIXELS WERE ALL WRONG

"This dishonest individual will have his name withheld - be promoted - then be nominated for a New Years Honour when the dust has settled..." 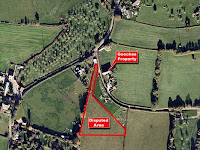 Well, its finally happened. In an age of photoshops, some great, some awful, there's been a case where a governmental body used digital manipulation of a picture against a private citizen. It happened in England. It seems Mr and Mrs Gooch of Westbury-on-Severn, Glouchester were accused of turning farmland near their property into a garden, and the local council held a meeting to rule against them:

They had not been informed about a meeting and Mr Gooch turned up to hear councillors were considering enforcement action.

The matter was put on hold for an investigation and councillors later agreed no enforcement action was necessary. Since then the district council has reviewed its enforcement policy.

Local councillor Norman Stephens said he was so embarrassed he had spent months avoiding the couple. 'This should never have happened and I hope lessons have been learned,' he said.

What went wrong? Well one of the councillors photoshopped his own car on the property as evidence of their misuse of the carefully monitored Forest of Dean area.

In America we have an annoyingly intrusive government at times, but England has a nearly tyrannical government and a long, proud history of controlling land and preventing any action taken on real estate without permission from on high. To a certain extent the island has to harbor its resources carefully, but sometimes they take it a bit far.

In this case, the council was willing to fake evidence against someone and the reason behind it is not clear from this Daily Mail story. The abuse of power is clear; holding meetings without informing the people involved and faking evidence. Yet outside of voting them out of office, there's no accountability for these councilors. They had to pay a fine but they have their jobs still.

And "Gooch" sounds like something Monty Python would name a person.
Posted by Christopher R Taylor at 11:51 AM