FEAR OF THE OTHER

“We'll be working to undermine the G-20 summit by attacking their power, making connections to the local manifestations of their neoliberal agenda. … The G-20 is in a house of cards: let's shake the table.”

So the G-20 met again, the 20 largest economies in the world. Their topics were varied and mostly rhetoric, but what happened outside the meeting was entirely predictable. Black block "anarchists" and rioters showed up to protest ... well the things that make them able to protest and buy those nifty outfits they wear. Seriously, they are protesting capitalism, government, world trade, consumerism, and all the things that, when not protesting, they benefit from.

Dressed in fashionable black with black bandannas to protect their identities (or, mostly, just to look cool), they clashed with police, broke things, and generally committed mayhem. The press was there to cover the events, noting their violence with a sort of resigned tone of expectation: they'll be here, they will be violent. There wasn't any condemnation of their message or of the left they belong to politically; the tone tends to be sad or mocking more than anything else.

Every time the left would hold an "anti-war" protest of any size, these guys would show up and start blocking traffic, breaking shop windows, spray painting objects and generally being childish, destructive, and stupid. Every time there's a major economic meeting, they show up and cause trouble.

Contrast this with the legacy media's treatment of Tea Party protests. Some people shout, and the cries of violence and danger arise. The body of a census worker was found on 9/12 and connections to the 9/12 Tea Party protest at Washington DC were proclaimed... even though the body was in an advanced state of decay and was found in one of the worst parts of town, no where near the capitol grounds.

Democratic Politicians pontificate about the dangers of Tea Partiers, crying about expected violence, shrieking about klan memberships and worrying about some barely contained catastrophe. Some are even claiming they feel the same way about them as they did in 1963 when President Kennedy was unexpected and shockingly assassinated by a communist radical. In all honesty, I believe that one, because there wasn't any special "feeling" of danger or threat then, it was stunning when the president was shot, not expected or the culmination of an ominous mood.

So why dismiss the G-20 protesters as typical and signifying nothing while inventing demons in the Tea Party?
Well some of it is just partisan posturing, an attempt to manipulate the apparently positive feeling most Americans have for the Tea Party movement (if you believe polls). A lot of people's neighbors, friends, and co workers are attending these events or are at least in support of them. If the Democrats can make these protests look awful then their influence on public perception and voting by congress can be reduced or even eliminated. That much is not particularly new, politicians have been doing it for centuries, and the Democrats have it down more or less to an art these days. Just ask Joe the Plumber or Sarah Palin... or any of the women who accused President Clinton of sexual misconduct.

That's why the Tea Party is demonized for a tiny minority that shows up with crazy stuff but the "anti war" movement was lionized despite a significant chunk of it being made up of lunatics, radicals, and anarchists destroying the neighborhood. The former is made up of the enemy, the latter is made up of the ally, so you do not speak ill of your friends, and presume their goodness while presuming the evil of your enemy.

Yet I think at least some of it is fear. Not fear of the power of the mighty Tea Party, but fear of the people involved. Faux anarchists are pretty much made up of harmless high school and college students who shop at the Gap and drive a Scion they spent thousands of dollars to customize and thus think is cool. They're the I-Pod generation of rich, pampered kids who think they are making a difference between sipping 5-hour energy drinks and texting about how cool they are. They are momentarily violent and disruptive, but more in a manner of youthful exuberance than any real lasting threat. 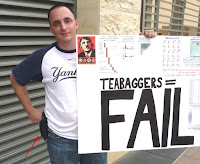 On the other hand, the Tea Partiers are made up of the mysterious, frightening religious and conservative types, those red staters in flyover country. Who can understand them? The legacy media sends emissaries to interview these strange, alien people who do not live in Manhattan or Los Angeles, but for the most part contact is limited to stories about disasters and mockery. These are people who actually go to church and own guns. They hunt and fish and live on farms, can you believe it? They might actually use those guns. They are bitter clingers, the Jesuslanders, the people who live where no one who is anyone actually goes.

So while the "anarchists" are pretty familiar types - even kids of the legacy media guys and the Democratic party politicians - Tea Partiers are the other, the strange, frightening people who might do anything. And when you've been raised, educated, and work among people who agree with a certain, distorted (if not completely fictitious) version of history, it becomes clear: these are the bigots, they are the ones who killed Kennedy, they are the dangerous types who are one step away from... dare I say it... a militia!

So when the Obama inauguration pulls in over a million people, including some who "tag" national monuments and leave trash all over the lawn, that's just the work of a few scamps while the numbers were closer to 2 million! When the Tea Party pulls in a million or so people who leave the place pristine, it was about 70,000 disgruntled racists who clearly represent the worst in America. Because it is the narrative, not the facts, which drive this perception. Left=good, right=bad, and there is no variation allowed in that basic worldview.
Posted by Christopher R Taylor at 8:43 AM