THE COST OF GLOBAL WARMING HYSTERIA

“The panic over global warming is totally unjustified, there is no serious threat to the climate” humanity is “hypothetically ... more threatened by cold than by global warming.”
-Yuri Izrael, vice chair of the IPCC 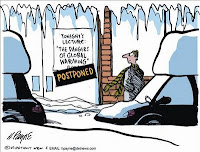 Global Warming has gone out of favor with the AGW hysteric, they prefer the term "Climate Change" which sounds more generic and allows them to continue their fearmongering despite the continuous trend in world temperature reduction since 1998. By using the term Climate Change all the PR is in place to make a seamless shift into worries about global cooling when it becomes obvious that the warming warned about isn't taking place. As the world around these folks becomes more aware that their dire predictions are not taking place, they work ever more furiously to get their policies entrenched into governments of the world before the political mood shifts completely against them.

Here are a few stories from the news recently concerning these efforts and their results. First, from Australia where leftist Prime Minister Rudd is pressuring the government to establish a carbon cap on the nation and work to foil carbon trading scams:

The Herald Sun can reveal Australian Federal Police agents will have to prosecute a new range of climate offences.

But they are yet to be offered extra resources, stretching the thin blue line to breaking point.

The group had been trying for months, without success, to discuss the issue with Climate Change Minister Penny Wong, he said.

Interpol has warned the carbon market will be irresistible to criminal gangs because of the vast amounts of cash to be made. Possible rorts include under-reporting of carbon emissions by firms and bogus carbon offset schemes.

"If someone is rorting it by even 1 per cent a year, we're talking about many, many millions of dollars," Mr Torr said.

The Australian Federal Police (equivalent to the FBI in America) are in charge of law enforcement for Australia both in the country and overseas. They handle terrorist threats, drug syndicates, people trafficking, fraud and threats against children, kidnapping, and so on. And now, they are being asked to pay less attention to these crimes and focus more on stopping people from cheating in their carbon trading efforts. You can always tell a culture and a government's priorities by what laws they push to prosecute and what they tend to let slide. Like voter intimidation by the Black Panthers, for example.

Canada has strict climate change-inspired laws as well. They have a carbon tax if a city or a province pollutes too much, in an alleged attempt to pressure them to reduce emissions (also a helpful revenue source). What happens when you combine that with socialized medicine?

The Lower Mainland's health authorities will have to dig more than $4 million a year out of their already stretched budgets to pay B.C.'s carbon tax and offset their carbon footprints.

Critics say the payments mean the government's strategy to fight climate change will further exacerbate a crisis in health funding.
...
Fraser Health officials are grappling with a budget shortfall of more than $100 million and potential cuts to patient services, while low on their list, have not been ruled out.

That's right, they're being forced to cut funding for health care to pay for their tax because they pollute more than the government wants them to. This isn't too surprising, since as in the US, the scheme for cap and trade seeks to reduce pollution levels to before the advent of the automobile. A Canadian quoted in the Canadian story pointed out the absurdity of the situation that leftists in Canada have created:

"You have public hospitals cutting services to pay a tax that goes to another 100 per cent government-owned agency," NDP health critic Adrian Dix said.

It does if your goal is to cripple civilization and achievement while forcing the world into ever greater central government control.

And finally out of China, we have this news: China doesn't care to sign on to any climate agreements that are decided in Copenhagen, no matter what the other countries of the world decide:

China will not make a binding commitment to reduce carbon emissions, putting in jeopardy the prospects for a global pact on climate change.

Officials from Beijing told a UN conference in Bonn yesterday that China would increase its emissions to develop its economy rather than sign up to mandatory cuts.

Also in that story was a report that Japan refuses to sign on to increased emissions reductions for their nation, as they are unable to meet their present goals.

This leaves the choice for nations such as the US: agree to cuts that cripple their economy even further in a period of deep and likely deepening recession, or ignore the agreement? Signing on would cripple the US economically compared to China, in what Congressman Sensenbrenner (R-Wisconsin) describes thusly: "they amount to unilateral economic disarmament."

“For the first time in my two and a half years in this job, I don’t know what to say.”

Meanwhile, the US government is pondering the sale or trade to China of high technology. Before the announcement was made that they wouldn't sign on, China teased with the concept of trading their agreement for free tech from the US without going through all the trouble of stealing it:

Jonathan Pershing, who was part of a U.S. delegation that returned this week from Beijing, said the Chinese are looking to the U.S. for ideas and technology to retool its high-carbon industry.

"They want from us technology, and we want from them action," Pershing said on the sidelines of U.N. climate talks. "There's room for agreement there."

Now that the deal has fallen through, there's always a chance it could happen. Since China owns almost 800 billion of US debt through bonds, they could offer to swap some of that debt for the tech. Meanwhile in the US, the Democrats in control of congress and the White House are working to pass cap and trade and socialized medicine so they can keep up with other countries already suffering from these burdens on their troubled economies.

Tip of the hat to Tim Blair for the China refusal story and ParaPundit for the China trade story.
Posted by Christopher R Taylor at 7:47 AM

Soon, everyone will be a criminal. Then the statists can selectively arrest those whose oppinions they would like to supress.