"Just wait until ACORN gets through with this." 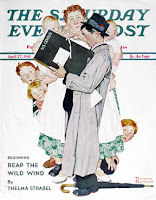 One of the expenses laid out in the "stimulus" package is a request for 1 billion (with a b) dollars more for census taking. That seems like a pretty big amount for the process which already is funded automatically (the US constitution requires census taking). When I saw that (courtesy the Purple Avenger on Ace of Spades HQ) I was confused, why that expense? Well there's something by Tom Blumer on Newsbusters yesterday that helps make sense of the money:

Now it looks like Barack Obama's inner circle is going to teach the Census Bureau how to count in 2010. CQpolitics.com this morning reported that the White House is taking the next decennial census away from the Commerce Department, and keeping it for itself.

The reason given why Commerce is supposedly not up to the job is that nominee Judd Gregg of New Hampshire fought Bill Clinton in the mid-1990s over "emergency funding" for the 2000 census that was really an attempt by the Clinton administration to cook the books.

Mr Blumer goes on to quote an LA Times article from 1998 about a similar attempt by the Clinton Administration:

Commenting on a dispute that has become highly partisan, President Clinton on Tuesday argued for the use of statistical sampling techniques for the next U.S. census, promising that the method would avoid the 1990 undercounting of minorities and children.

The actual Enumeration shall be made within three years after the first meeting of the Congress of the United States, and within every subsequent term of ten years, in such manner as they shall by law direct.
-Article I, Section 2

The concept of actual counts of real citizens is also mentioned in the 14th Amendment:

Representatives shall be apportioned among the several States according to their respective numbers, counting the whole number of persons in each State, excluding Indians not taxed.

Why? Because in the 3/5ths compromise, Northern states didn't want the south counting slaves as full citizens for their legislative numbers. If the south could count slaves, they could in effect over represent citizens (since slaves were not citizens) in the area, and gain a greater number of legislators and electors. If the census counted slaves fully, the south would gain greater power. The north didn't care for that (yes, the divide was there even in the foundation of the country).

So the solution was to count slaves as 3/5ths of a person. For every 5 slaves, they counted 3 actual people. This was not an attempt to dehumanize blacks, but it effectively did: you're only worth 3/5s of a human, slave.

The 14th amendment put an end to the practice, it didn't matter who you were or what you did: you were a full person that was fully counted. The US Constitution is very plain on the issue, every person must be counted.

The Obama administration wants to try what the Clinton administration tried. They want to sample the public and extrapolate from that rather than count every person when a census is taken. Why the extra expense? Well the shift from counting heads to statistical analysis and extrapolation requires different people, different rules, different offices, and a shift in focus. All of that costs money. The move away from the commerce department costs money. A new census office that only does this costs money. So they need the billion extra to pay for all this.

Why change from counting people to guessing based on a small sample? Well President Clinton claimed it was to make sure everyone was counted. Stay with me I know that sounds nonsensical and reversed, but here's the problem. In the 1990 census, minorities and children ended up being undercounted. Why? Well when the goverment knocks on your door and hands you a paper to fill out under penalty of law, a lot of people get pretty nervous. They don't want to tell the truth, or tell all about themselves. Illegal aliens are afraid they'll be gathered up and sent back home. Many minorities are raised and taught from birth never to trust the government or any officials, that they are all out to get you. Some people just don't want the government to know about them.

Los Angeles in particular was undercounted - the heavy population of illegals there almost certainly was a major factor. So the theory is if you take a small sample and extrapolate from that, you avoid these problems of self-reporting. By counting fewer, you count more, they claim.

The problem is of course, as I've written about repeatedly, that poll-taking is incredibly easy to game. You can make the numbers say what you want, and the numbers themselves can be amazingly misleading based on how, where, and when you collect them. If you handle the numbers correctly, you can do almost anything with them. If you are motivated enough, you can make them say what you want politically. There are more x than we thought. Group x is having problem z and the government must fix this. You can manipulate public policy - the recent housing disaster was created by just such a gaming of statistics. By manipulating the numbers on earning power, home ownership, mortgage refusals, and so on, the US congress was manipulated into passing laws that were ultimately disastrous to the economy.

But there's more. By sampling and guessing or inventing numbers, it can have a tremendous amount of political impact. How districts are drawn and what states or areas get electors in the presidential vote, who gets more or fewer legislators all are determined by census numbers.

In 2001 the US Supreme Court ruled that the sampling method of census was in fact unconstitutional. However, the ruling was only in regard to using the numbers for apportioning congressional seats - the part of the US constitution most specifically meant by the "actual enumeration" line. That leaves a lot of open room for changing how the counting is done.

And for activists who want to not just transform politics in the US but make sure they stay transformed, cooking the books is a lot easier when you don't have those pesky actual numbers in front of you. You thought Gerrymandering was ridiculous? If this method is permitted, it will make that sort of redistricting look like child's play.

In any case, having the US Census taken away from the Commerce Department only makes sense; the present Secretary of Commerce voted in the 1990s to eliminate the department entirely.
Posted by Christopher R Taylor at 10:01 AM