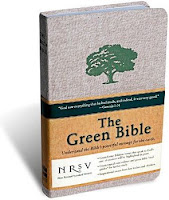 I've poked some fun at how for some people, environmentalism is essentially a religion; a dogma that defines their worldview and ethics. True, for most it is not organized but it is religion nevertheless - it is their faith and defines their philosophy and spiritual outlook on the world. It even has a deity: the self, able to manipulate and save the planet.

Yet there is a reversal going on: in some quarters of organized, established religion, environmentalism is creeping in. For example, in 2007, the National Organization of Evangelicals released a “Urgent Call to Action” statement signed by scientists and leaders in the NAE. More recently, a "green Bible" was released. Here are the details, courtesy Ned Potter at ABC:

Released by HarperCollins Publishers this fall, the Green Bible emphasizes environmental messages laced throughout the pages (the book's Web site says it includes 1,000 references to Earth in the Bible, compared to 490 to Heaven and 530 to love). In addition to highlighting Earth-related passages in light green, the book is printed on recycled paper with soy-based ink.

Well, I'd say that has as much legitimacy as printing the words of Jesus in red as if the rest of the Bible is in contrast to what He said. Another story in the news lately of this shift in some religious areas is the Anglican Church spending 200 million dollars on Al Gore's investment group. George Conger at the Website Religious Intelligence has the tale:

On Nov 18 the First Church Estates Commissioner, Andreas Whittam Smith reported that in late September the Commissioners had placed the funds with Gore’s boutique management firm which follows an “environmentally sustainable global equities mandate.” Funding for the investment came from “cash and Treasury bills”, he said, and not from the sale of UK equities as initially planned.
...
Generation Investment Management was founded in 2004 by Mr Gore and David Blood, former head of Goldman Sachs Asset Management, and had almost £5 billion under management before the market collapse.

The firm invests in companies that follow “socially responsible” business model such as insulin manufacturer Novo Nordisk, Swiss food conglomerate Nestlé, and San Francisco’s New Resource Bank --- a “green” lender in the US.

So the Church of England has decided to spend its money on "green" investments.
What is interesting to me is that this effort is at the time when the theory of human-caused global warming and the looming disaster that hysterics such as Gore predict is unraveling most rapidly. Science is turning against AGW as scientists learn more about the atmosphere, the sun, and how they interact to influence climate. The prevailing and, at least the last two winters, empirically obvious state of the climate trend right now is cooling, not warming.

I don't mind the idea of Bibles printed on recycled paper, I don't mind the idea of calling attention to how strongly and repeatedly God calls for care and responsibility when dealing with the environment. It is frustrating to me that the Christian church - which based on its theology and scripture ought to have been in the forefront of environmental stewardship - is sluggishly following the secular world.

However, using church funds to help a con man feel significant and important while padding his already bloated wallet based on bad science just makes Christianity look foolish and behind the times. Gore's investment schemes are the work of a huckster, someone finding a trend and making a buck off it, while trying to scare people into giving more. Granted, hellfire and damnation pastors in the past have used the same sort of schemes to pad their wallets, so the connection is not particularly surprising or new, but it highlights a disturbing trend in the mainstream churches.

Rather than being directed by the word of God and their faith, these organizations are being directed by the culture. When the prevailing culture scoffs at environmentalism, so do these organizations. When it becomes trendy to be "green" well, they're lining up to show they are too. Instead of being a leader, a spiritual guide, a beacon to the lost and the hopeless, these churches are being lapdogs to popular culture, offering them nothing they cannot get elsewhere, and without that uncomfortable stuff about sin and salvation.

Things like the "green Bible" are just crass attempts to make a buck off genuinely concerned or interested people. They can act as a calling card for how much you care about the environment and are trendy stunts like the "ebonics" Bible put out in the early 1990s. That publishers would put something of this sort out isn't surprising; they are in the job of printing things they believe will sell.

The problem comes when instead of worrying about salvation of souls and the result of Christ's love, churches and individual Christians begin worrying primarily about salvation of wallets and their personal comfort in a world they fear is becoming unstable and warming too rapidly. Churches should be teaching the grace of God in Christ Jesus, the doing and dying of the savior and then through that our response in gratitude that will naturally and spontaneously include serving our neighbor - needy or not - and being responsible stewards of the planet.

But for churches, the ultimate focus must be on God, not on cultural trends. The efforts must be Christ-centered and grace-driven, not popularity-centered and trend-driven. Every single time the Christian church has committed its worst sins it has been the result of listening to the culture around it rather than the word of God. And that's what I see happening once more here.
Posted by Christopher R Taylor at 8:33 AM

I must agree with you 100%. I am a professor at a supposedly Christian college in Korea. My own campus leaders have become duped by the growing green monster that is consuming the planet. They have even surplanted traditional design/art programs for a the global-trendy eco design. They had to sneak it in, and haven't yet told the current student body of the change starting next year. Green power = green poo-poo.