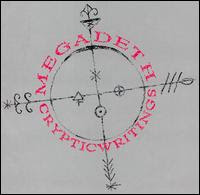 Megadeth is a heavy metal band that started when bassist Dave Mustaine left the group Metallica due to his drug abuse and wild behavior. Megadeth produced several albums of varying quality, but each has been better than the last, especially after Mustaine cleaned up and kicked the Heroin addiction. 1992's Countdown to Extinction was a new start for the band, and while they did not match Metallica's vast success with ...And Justice For All and the black album, it was their first big crossover hit: a double platinum album. The sad irony is that while Metallica has gone downhill since the black album, Megadeth has just gotten better and better.

It is on Cryptic Writings, however, that the song Trust was released, which is one of the finest works Megadeth has ever done. Moving from standard headbanging guitar driven scream metal to more thoughtful and meaningful lyrics and music, Trust is the kind of song that you listen to and not only enjoy the music but the lyrics, which make you think, remember, and for many sympathize with and agree.

Trust is the song of a couple for whom neither side is telling the truth and neither side trusts the other, but they cling to the myth for the sake of the relationship and what it ought to be. The stark horror of finding yourself in such a situation and the helpless feeling of being caught in a web of deceit that you cannot unravel without losing everything is powerful. They try to break up but both know it's never really over because the lies and the deception will haunt them forever. Without the power of redemption, there can be no hope of forgiveness.
Lost in a dream
Nothing is what it seems
Searching my head
For the words that you said
Tears filled my eyes
As we said our last goodbyes
The sad scene replays
Of you walking away

Time and again
She repeats lets be friends
I smile and say yes
Another truth bends,
I must confess

I try to let go, but I know
Well never end til were dust
We lied to each other again
But I wish I could trust

God help me please, on my knees
Betrayed by lust
We lied to each other so much
Now there's nothing we trust

How could this be happening to me
I'm lying when I say, trust me
I cant believe this is true
Trust hurts
Why does trust equal suffering

Absolutely nothing we trust

Music
Posted by Christopher R Taylor at 11:52 AM

Mustaine didn't leave he was kicked out!!! Mettallica RAWKS 4-EVA!!!!!

mustaine wasn't the bassist...he was the lead guitar...but i agree completely =)