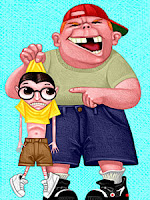 In online games, a term came into use to describe players who rather than trying to win or compete simply were there to cause misery to others. The Griefer is interested only in disrupting game play for everyone else, causing trouble and making other players unhappy and upset. The enraged reaction they get and the disruption they cause is considered a victory, a show of power by the Griefer. For example, instead of trying to find and kill other players in an online deathmatch, they try to do something that causes the game to crash or use exploits that make the environment react poorly. Increasing game lag so that people move very slowly and take more time between actions is another Griefer act.

This sort of behavior can be found in a variety of different settings and areas, in real life a Griefer is the kind of guy who deliberately causes a disruption in a line so that everyone has to wait longer, for instance. The IRC (Internet Relay Chat) server system DAL-Net was almost destroyed by a group of dedicated Griefers who were angry at being banned, angry at being chastized for their behavior and angry that their attempts to steal names and passwords were frowned on by others. For two years they were so persistent and dedicated in causing disruption and lag in the network that it plunged from the most popular servers to the seventh, and for a time were all but impossible to log on to.

In the realm of commenting, there are Griefers as well. Griefers are distinguished from trolls and spammers by their intent more than their actions. Spammers are trying to get attention drawn to their content, be it advertisement or some personal point they make over and over. Trolls are trying to draw attention to themselves by saying deliberately antagonistic and provocative things for a reaction.
Griefers are trying to destroy the comment section, blog, or message board they attack. They do not care about attention on the message board, they aren't trying to get response. They simply want to cause trouble and make everyone miserable because they find it funny or empowering. For the Griefer, sucessfully shutting down or causing everyone to become upset and miserable is attention enough without needing any responses posted.

Griefers will flood a site with thousands of posts, or absurdly long posts not to spam to make a point, but to overload the servers so that they cannot continue to be available to others. They will put code in their comments that cause problems for the message boards or those who read it, especially if they can somehow get a virus into the system in some way. A Griefer is often guilty of various computer crimes in their actions, and usually are also hackers or crackers, people who try to use their computer skills to find and enter areas that are denied them as well as manipulate those areas. Usually these are the kind of people who come up with viruses that plague the Internet.

A bully is a kind of Griefer (or more properly, a Griefer is a kind of bully), someone who finds power in making others suffer. Their skill and training in computer activity gives a Griefer power over people with less skill and ability, and the use of this power makes them feel good and meaningful when otherwise they might not feel so. Sending a virus out to crash everyone's computer and reading about it in the news is one way of making such a person feel important and successful even if their life and social interaction may not otherwise be.

I'd usually at this point advise people to not be this kind of commenter, but that's futile, telling a Griefer not to do what they do is simply adding fuel to the fire, they'll be that much more likely to do so, and pick you for their attention. Griefers are the kind of troublemakers that usually face criminal charges eventually.

This is part of the Profiles in Commenting series.

Comments
Posted by Christopher R Taylor at 10:55 AM