WHATEVER HAPPENED TO QUEENSRŸCHE?

When people think of Seattle rock, they might think of Nirvana or Alice in Chains, maybe even Jimi Hendrix. But Queensrÿche was the biggest thing out of Seattle since Heart, and influenced bands like Alice in Chains along with dozens of other heavy metal groups.

First formed as Cross+Fire, then the Mob, the band changed its name and added members until it became Queensrÿche when their first demo tape was finished. Kerrang! magazine publicized the demo and the first demo Queen of the Reich was released as an Extended Play record, reaching 81 on Billboard's charts. This was in an era when Heavy Metal was in a decline, with glam bands of the 70's out of style and skinny ties and new wave beginning to rule. 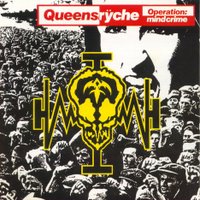 Their sound was somewhat progressive hard rock, with albums The Warning and Rage for Order establishing a unique sound for the band in opposition to bands like Cindy Lauper and Quiet Riot. But it was in 1988 that Queensrÿche really took off with Operation: Mindcrime, a concept album about an anarchist used by a mysterious backer. Full of woe, sorrow, drug use, prostitution crime, and angry cries against the system, Operation: Mindcrime was a gritty dark look at the wrong side of the streets. The music was a tight consistent theme and variations, with powerful lyrics and a gripping concept, and Queensrÿche was suddenly on the map for the world to see. Many fans consider Operation: Mindcrime to be Queensrÿche's best effort to date.
This hit was followed up with the even greater commercial success Empire, which established Queensrÿche as a genuine hit, touring with the similar success Metallica. The videos for songs such as Silent Lucidity were MTV favorites, crossing over from metal and hard rock to more mainstream listeners. Empire was their most successful and best-crafted achievement in terms of commercial accessibility and technical achievement.

When their next CD was released, Promised Land, fans bought it in enough numbers to make it a multi-platinum effort, but it was just flat and without the energy and talent that previous work had enjoyed. Something happened, the magic was gone.

To me it sounded like the band was trying to redo Empire's success by copying Empire's music, but without the genuine talent and creativity that went into that disc. It was as if they said "Silent Lucidity got to #5 on billboard, lets do a whole album of that!" Queensrÿche released Hear in the Now Frontier, then followed up withQ2K and Tribe with a variety of different guitarists after their signature axe player Chris DeGarmo left. The band's most recent work is Operation: Mindcrime II, which was a greater commercial success, but is aimless, often without melody or direction, and lacks the tight concept musically and the well-crafted themes that the first did. Even Ronnie James Dio's vocals and harder, more metal guitar work couldn't save it. 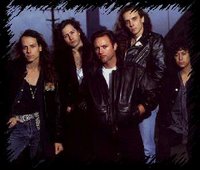 What happened to the band? After putting out four increasingly great albums, they lost it. Was it DeGarmo's departure (he's now a commercial airline pilot)? Was it too much success that made them lose their way? When Geoff Tate joined the band, it was reluctantly because he didn't want to do metal. Perhaps his influence changed their direction and the band lost it's feel. I wonder if DeGarmo wasn't their best influence, and as he lost his ability to shape the band's music and direction he decided to leave.

As a non-musician, I am amazed by how new songs come about, how someone can put out an album like Fleetwood Mac's Rumors or Dire Straits' Making Movies where every single song is exactly right. Maybe there's just a limit to how many great songs someone can come up with, before the ideas fall apart. Guns 'n' Roses seems to have reached that early, some bands like The Rolling Stones can keep going for decades. For fans, this is disappointing and sad, like an old friend who loses their memory or a restaurant that just can't seem to put out food like it used to.

Does anyone have any more information on Queensrÿche or thoughts on this? What happened to the band?

*UPDATE: Since the writing of this, Queensrÿche has released American Soldier, an extraordinary work I highly recommend. With this disc, the band is back.

Music
Posted by Christopher R Taylor at 7:49 AM

Let's see I am listening to Empire on surround sound as I clean my home right now. I listen to them all the time on my iPod. Queensryche is compelling and always will be. I can't imagine my world without them. Completely brilliant set of musicians regardless of where they are. Everyone has to take a break sometimes, and that may be a decade long break or more, but believe me that isn't Geoff Tate's fault. Each and every one their past and current band members are bad ass. Life get's in the way, just the same way it does to me when I play my instrument or when I get writer's block. They will always be legendary, and they will be back.

Queensryche lost their main songwriting ability when DeGarmo gave it up... which, by the way, was some point after Empire and before Promised Land, which he wrote and played on. The incredible writing was just... gone, and has not returned. Yes, Tate has some writing skills, but a 5 of 10 compared to DeGarmo's 11. They've always had the playing skills, even now, but when the writing is gone, so goes the band. Miss these guys, but they still live on as I listen to them a lot. They were just too damned good to not keep listening!