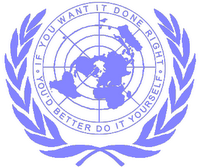 The United Nations started with a noble and laudable goal: to prevent another Hitler from rising up and threatening the entire globe. It gave the world a place to shuffle off all their diplomats, thus saving us from their wordy, annoying presence, and at the same time was meant to be somewhere that, as neutral ground, enemies and allies could meet to discuss issues. However, in the end, all we've gotten is a more expensive League of Nations without the moral foundation to recognize that nations such as the Cuba and China do not belong on the UN Council on Human Rights.

Most recently, the UN let down the people in East Timor who were hoping for help from the outside, then tried to cover up their failure:

The United Nations has ordered staff in East Timor not to co-operate with Australian Federal Police investigating the massacre of 12 unarmed Timorese officers by renegade soldiers, prompting allegations of a cover-up. An email from the UN's deputy representative in Timor, Pakistani General Anis Bajwa, had been circulated to all staff, including employees evacuated to Australia, directing them not to assist AFP detectives investigating the worst atrocity since the violence of 1999. ...

Earlier today the UN denied the email existed, but UN spokesman Bob Sullivan tonight contacted AAP and admitted a directive had been sent out in an email to all staff. "We made a mistake here," he said. "An email instruction was sent out telling staff to wait for the start of the official investigation. ... But the UN was willing to cooperate when eventually asked to by the East Timor government, Mr Sullivan said.

The story goes on:

The massacre of the East Timorese officers occurred after renegade soldiers opened fire on the police as they left their headquarters under a truce brokered by the UN's police commander in Dili, Saif Malik, also from Pakistan. Malik ignored advice that to lead unarmed Timorese police past the guns of the soldiers would lead to a massacre. "He was told by all his advisers not to take them out there, but he would not listen," sources close to the investigation said.

"He kept insisting the presence of the UN could protect them." Instead the police were escorted out behind a blue UN flag and got less than 100 metres from their headquarters when two soldiers opened fire, killing 12 officers and wounding at least 20, including UN police protectors from the Philippines.

Wretchard had this to say:

Let's see now. Twelve innocent persons killed by a mistake in judgment, not by a teenaged soldiers, but the senior foreign commander on the scene who ignored the advice of his advisers. This caused an incident that almost threw an entire country into civil war, though there were tensions before that. And what was the foreign response? Don't cooperate with the investigation; then deny you said you wouldn't cooperate with the investigation. The finally cooperate when you've got no place else to run. But oops. This isn't a rogue state -- like America. This is the UN.

Commenters at the Belmont Club responded:


Isn't this the exact same Modus Operendi the U.N. used in Iraq when they got their own asses blown up?

Say that you don't need to take precautions since you are the U.N., ignore advice from the people who know - then skedattle when the predicted inevitable occurs and say that someone else has the place so screwed up not even you can fix it.

Sounds like Hollywood all right but rather the standard sets of scripts from the TV sitcoms of the 60's. Same Stuff, Different Show.
-by RWE

Mr Goff says the reconstruction work in East Timor will have to be led by the United Nations.

East Timor's Parliament met on Monday for the first time and endorsed President Gusmao's decision last week to exercise emergency powers giving him sole control of the military for 30 days.

Indonesian President Susilo Bambang Yudhoyono has lashed out at embattled East Timorese Prime Minister Mari Alkatiri for suggesting that Jakarta had a role in fomenting unrest in Dili.

International aid agencies estimated that over 100,000 people in the riot-torn Timor-Leste, around 10 percent of its population, may have been made homeless.

The nation and Macao were both former Portuguese colonies.


The Australian troops are being criticized for rules of engagement that do not allow them to fire on looters. Maybe those ROEs are good; maybe not. But as I've often pointed out, there's always a price for restraint. Those looters are going to get bolder. Disdainful. Arm themselves.

But right now the immediate price is being paid by the Timorese, who must watch their pitiful belongings go up in flames or ripped off as Australians -- watched by the press -- fight under Marquis of Queensbury rules.

Later on we are going to hear about "why didn't you control the looting" when the quarterbacking starts. Does it sound familiar? It does to me. But the quarterbacking will be pompous, puffed up and on page 1. This UN incident will by then have gone to page 73, right next to the announcement of the Walla-walla Boys High reunion.
-by Wretchard


I wonder what the reaction would've been if we had controlled the looting. (Shot a dozen or so looters, I mean.)

I wonder what the war critics would have said then. Ah, heck. No I don't.
-by sirius_sir


Last year it was reported in the German journal Der Speigel that a passenger jet full of Syrian chemical warfare specialists had deployed to the Sudan. It was reckoned they carried stores and weapons smuggled from Iraqi depots in the runup to the U.S. invasion. Along with elements of the Sudanese military, they participated in several operations against the black African Non-Muslim communities the Islamic government in Khartoum finds so annoying.

This sort of field testing of weapons systems is similar to the deployment of the Kondor Legions sent by Hitler to assist Generalissimo Franco’s armies during the Spanish Civil War. It was German aircraft, for instance, that bombed the village Picasso memorialized in his painting “Guernica.”

This was met with resounding silience from the Mainstream Alleged Media in the U.S.

Who was United Nations High Commissioner for Refugees during the Rwanda slaughter, who actually authorized the brave evacuation of U.N. troops in the face of all those awfully sharp garden tools used to chop EIGHT HUNDRED THOUSAND victims. Wasn’t it Mr. Kofi Annan?

Aw, Give the guy some credit. He was, after all the first U.N. bureaucrat to rise through the administrative ranks to be elected to serve as Secretary-General. Previously that office has been filled by some delegate of one of the member thugocracies. Whew. Think about what it signifies to have been so effective at feigning sincerity and the appearance of action to have risen to the top of the cesspool of do-nothing CYA turds. I mean, these guys have been known to steal the silverware from the elegant U.N. staff dining rooms...

Evidently the Oil-for-Bribes program really cemented his place in the hearts of his cronies; He’s in no danger of leaving. So safe in his perch that he has been suggesting it might after all be in the interests of the community for some nation to take unilateral action to intervene in the genocide proceeding in Darfur. (Who could he mean?)

I’ve said it before about our own wonderful Senate and Congress: I don’t begrudge them their fat salaries and all the money they can stuff into their secret bank accounts. Just PLEASE stop making all those stupid laws.

I really believe the world can tolerate paying every sonofabitch UN tick a million dollars a second for the rest of their leperous lives, if they would just take the money and shut up.

Let the rest of us get on with solving the problems.
-the Mad Fiddler


Many antisemites had long toyed with the idea of deporting European Jewry to Madagascar and, briefly, in the summer of 1940, this scheme was the centerpiece of the Nazis’ Jewish policy. In the spring of 1940, after the victory over France, Himmler proposed to Hitler that the Jews be banished to some African colony. However, the official who made this plan practical was Franz Rademacher, the expert on Jewish affairs in the German Foreign Office. Hitler disclosed the plan to Mussolini in June 1940 as part of its elaboration. The Madagascar Plan was shelved when, in the autumn of 1940, Germany failed to win its battle with Britain. The French also refused to cooperate with the plan. Essentially the plan was not feasible logistically.
Lets relocate the UN to Madagascar
-by Habu_1

In a column, Mark Steyn pointed out a problem with the history of the UN in trying to help troubled nations:

Here’s the lesson of the past three years: The UN kills.

All the best intentions in the world (and with the Oil for Food scandal eclipsing any scandal in world history in it's vast dollar amounts good intentions are questionable) are worth nothing if you cannot carry out your mission. The concept of the UN is possibly useful, but it's validity is eliminated by the inability of the organization to make moral judgements beyond "invading other nations is bad." Updated UN Logo courtesy Right Wing News.

United Nations
Posted by Christopher R Taylor at 8:40 AM