"At least I know that these soldiers didnt have to endure anything humiliating like panties on their heads, or a gay pyramid." 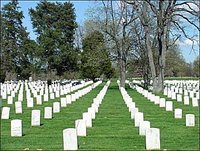 Recently two American soldiers were captured by militants terrorists in Iraq, tortured, and killed. Q&O blog suggests this might prompt soldiers to fight to the death rather than be captured, since they know their fates, and Confederate Yankee wonders if this might change coalition tactics some:

Though official orders will not be given, perhaps U.S. forces will not be so inclined to take prisoners after this incident. Insurgents and their al Qaeda allies set the tone of giving U.S. forces no quarter when they took prisoners.

And at the Daily Kos, Occam's Hatchet had this to say:

The bodies of the two captured U.S. soldiers were found in Iraq - bearing signs of "barbaric torture."

I hope Alberto Gonzales and John Yoo will sleep well tonight, with visions of those boys' bodies and the horrible barbarities inflicted upon them dancing in their heads. Perhaps Gonzales, and Yoo, and Rumsfeld and Bush will be able to envision the same inhumanities being visited upon their family members and loved ones as they drift off to peaceful slumber.

How nice. Commenters at Kos responded:

No tips please.
Just grief, and outrage, and prayers (if you believe in prayer) for the families and loved ones of all of those in these terribly dangerous places.
-by Occam's Hatchet

We didn't see that coming, did we?

Bush deserves full blame for this and anything like this that will happen in the future.
-by Mark H

Yep. But they'll twist it into an example of "what we're up against". Never mind that they helped create it and are perpetuating it.
-by MLDB

Easily refuted. During WWII even Germany and Japan, for the most part, honored the Geneva Convention with respect to U.S. troops (if not with Russian or Chinese troops). The notable exceptions, e.g. the Malmedy massacre and the Bataan death march, are rightly considered atrocities
-by Colorado Luis


Our Treatment of the Germans saved American lives. German soldiers were more likely to surrender to American troops, because they knew that they would be treated humanely.
-by forkush

I am certainly not excusing the actions of Bush and this administration...both in going into Iraq in the first place and for their own acts of torture. But the people who did this are sub-human animals. They certainly are to blame for torturing fellow human beings...whether it is our soldiers or the Iraqi men, women and children that have been tortured and murdered.
-by BarbinMD

These types are beyond repair and must be eradicated. (and Bush & co. should be in prison, but that's a different story)

Damn all who torture because humane death is bad enough. and damn those who vote for torture. and those who think war is the way to peace.


What irks me most is the fact

that they won't take responsibility because of their de facto legalisation of torture. They'll lose the elections, you say? So effing what! They'll simply go bask to Crawford and count the blood(y) money.

These deaths are the direct result of the Bushistas' policies. Might I remind those gathered here that these are war crimes? To see justice, especially for these young soldiers, ship the Republican scum responsible to the Hague.
-by Dauphin

you have a point about somalia, but as to the hanoi hilton, the treatment our POWs received there was directly related to our refusal to abide by the geneva conventions during that war, when we turned over whatever VC or NVA prisoners we took to the saigon regime, which incarcerated them in brutal conditions that made the HH seem tame by comparison. very few VC or NVA prisoners survived their incarceration.
-by hind

Doesn't make Bush or AG the AG or Yoo any less reprehensible or wrong, but it's not like we're dealing with folks who would carefully monitor their GC obligations in any event.

The GI's were snatched for the purpose of making a snuff video.

These soldiers weren't captured by the Iraqi government or Baathist party.

It bears noting that Islamist militants have a long history of torture and gruesome beheadings--in Algeria, Chechnya, Afghanistan, etc etc.
-by Geekesque

WHAT? They would torture anyway? Ahem. At the beginning of the war there were several soldiers in the 507th captured and held, as you might recall. They were treated quite well by their captors as it turns out, although Drudge carried the false and ugly story that Jessica Lynch was raped. In fact she was taken to a hospital to treat her for her wounds. But how quickly we forget right? They're all just "ragheads" anyway right?

Sorry. I know you don't feel that way about Iraqis. But. The torturing is in DIRECT response to Abu Ghraib.
-by reef the dog

Why publish these comments? Two reasons. First, to point out that the radical left is horrified by this event and wants those responsible to pay. Second to show that their position is based on the idea that terrorists and radical Muslim jihadis would treat us well if only we weren't so mean to them, and third to point out that they erroneously believe the US is torturing and murdering captured terrorists and POWs in a similar manner.

The "quaint" line of the main story comes from this memo by Alberto Gonzales in 2002, which describes some of the aspects of the Geneva Conventions as "quaint:"

"In my judgement, this new paradigm [rather than nations adhering to the laws of war and fighting as a regular uniformed army, the enemy is irregular, without uniform or disciplined organized leadership, and ignores morality] renders obsolete Geneva's strict limitations on questioning of enemy prisoners and renders quaint some of its provisions..."

I concur most whole heartedly and think the Geneva Conventions were fine for a time when massed armies met in the field of battle and observed certain rules, but are outdated (quaint) and inappropriate for modern warfare. They need to be updated, but the last attempt tried to make terrorists, spies, and saboteurs in the same category as uniformed soldiers which is the opposite direction from which we need to go.

The US is not ignoring the Geneva Conventions on war, all uniformed soldiers are treated under those regulations and are accorded all proper care and treatment. Those not protected by the Geneva Conventions (making war without uniforms, organization, a nation, and without structured leadership) are not treated the same by the US military.

One thing I do wish, though. That the left would stop using words like "ragheads" to describe the Arabic and Persian peoples, a term I've never read a conservative use on a blog.

*UPDATE: Changed the top quote from Samuel Adams to Ace of Spades Headquarters commenter The Drizzle

War, Military Issues
Posted by Christopher R Taylor at 9:09 AM

Oh, and death is better than being humiliated? First I would like to say that all individuals detained in Iraq are treated the same whether uniformed or not and the US follows the Geneva Convention to a tee when dealing with any kind of detainee. Also, you should not use the term POW, because that leads to the idea that this is a force on force battle also known as an A-Typical battle. Second, the US in no way uses any type of torture. President Bush has said that the US does not use torture and I can say from personal experience, WE DO NOT!!! There are more humane ways, such as sleep deprivation and taking clothes, and bedding materials, which is completely legal through the Geneva Convention. The thought of the insurgents treating Coalition Forces humanely if we were to treat their forces the same way is a completely idiotic idea. Do you really think they care how they treat us, for God's sake, they tortured a woman, just for instance, here is what they did: cut off her breasts and burnt the flesh to stop the bleeding so she wouldn't pass out, cut off all her fingers, raped her, beat her, scalped her head, they then tied her to a chair and put her in the streets of downtown Baghdad with this creed (Anyone who moves or helps this woman will be shot on the spot)...the woman then sat there and was eaten alive by the dogs!!! If this defines how we treat their kind in our prisons and detainment facilities, then I really need to reevaluate what I do for a living, because that is not it! Another point, the only people we can point a finger at are the extremists. Not all Islamists, not Bush, not one person. Muslims’ are peaceful people and only the extreme Islamists are to blame, they are the ones going out to place bombs on the roads and kidnapping soldiers only to show their beheadings on Pan-Arab television days later. Yes, Bush did send troops to Iraq, but he isn't the one blowing up our convoys, he isn't the one firing mortars and rockets at our camps. I do not fully support his reasoning for sending troops to the Middle East, so please don't think that I have him on a pedestal. So you say that Bush has committed “war crimes”…give proof. Stop throwing out accusations and corroborate what you are stating. I guess my main points I would like people to realize out of all this mumbo-jumbo is this: The US does not use torture, Islam Extremists will act and conduct themselves however they wish, and I wish people would educate themselves on the subject at hand. Please, know what you are talking about before making a statement. This would create less of a problem with rumors as well as false allegations --- A concerned US Army OIF 05, OIF 07 VET

Well said sir, and thank you for your service.