"Why am I not surprised that you keep the egg yolks separated from the egg whites? EGGIST!!!" 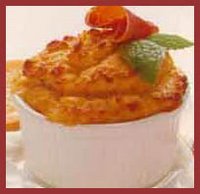 One of the many insults and attacks that are launched on the internet from the bravery of anonymity and being out of range is that someone is a "paste eater." This refers to very early years of school in which one is being portrayed as an especially dull child who eats glue out of the pot rather than working on the craft or project in question.

Protein Wisdom's professor Jeff Goldstein is no dullard, but he's attacked by various people around the net and spends a great deal of time gleefully fighting them on his blog, especially a community college teacher who until recently posted under the name "Thersites" about linguistics. Dr Goldstein responded to his being called a "paste eater" with a tasty-seeming recipe involving curd paste:

protein wisdom’s Paste soufflé serves four. Only, you know, being a stupid stupid paste eater, you’ll think it serves 7—a testament both to your arrogance and your intellectual overreach. So it serves you right that three of your dinner guests—likely racist haters, the lot of them—will go hungry.

Now, while this is more or less fun, the commenters added a few recipe and suggestions of their own:

[Kent is referring to Dr Goldstein's open comments and self-mockery in taking the anti-anxiety drug Klonopin, a running joke on the blog]

Why am I not surprised that you keep the egg yolks separated from the egg whites? EGGIST!!!
-by Beck

Even in jest, breeding tells, Repukes.
-by Boz

Just the sort of recipe a racist, homophobic, paste-eating anti-semetic semite would concieve while under the paid protection of his Masonic-Roveian-Zionist Masters! Bland, tasteless and STUIPD! HAH! HERE THAT!! Stupid I call thee!! Just like your racist posts and blogging!!!

Were you a TRULY INTELLEGENT Roveian-Masonic-Zionist you’d make up something like this for your guests:

I personally serve these as starters before me and my Marine Buddies go out and slaugther orphans and widows.
-by Swiftsure

Are you of Cornish ancestry? Because your next recipe could be for a Cornish Pasty...ha ha ha...Is that not droll?

Well, someone here has to be witty.
-by Up There

Here’s what I made for supper tonight:

Arrange the fish fillets in an oven proof 9x13 glass baking dish. Pour the rum and lime juice over the fish and place a slice onion on each fillet. Cover and refrigerate for 2 to 4 hours.
Preheat oven to 325 degrees F (165 degrees C).
Remove fish from the refrigerator and pour off about 3/4 of the liquid. Leave the onion slices in the dish and place a thick slice of lemon on each fish fillet. Sprinkle with oregano and black pepper to taste. Place a pat of butter or margarine on each fillet.
Bake, covered, at 350 degrees F (165 degrees C) for about 20 to 30 minutes or until fish flakes easily with a fork. Be careful not to over cook the fish or it will be dry. Serve with the cooked onion and lemon slices.
-by Swiftsure

Oh, and that recipe reminds me of some of the reader reviews found on Epicurious:

“Great recipe! I substituted 4 chicken breasts for the paste. I was out of milk, so I used a cup of Pinot Grigio. Because we’re on a low-cholesterol diet, I used olive oil instead of butter. I didn’t beat the egg whites, I slapped them into submission. Then I omitted them altogether along with the mustard, eggs and Worchestershire Sauce. I replaced those with several sprigs of fresh rosemary. It tasted just like Marcella Hazan’s Pan-roasted Chicken. I would definitely make this again!
-by ahem

Unfortunately, by this point the thread had largely degraded into a personal fight accusing Dr Goldstein of various nefarious acts and commenters being rude and sarcastic - how unlike the internet! But there were some gems in there I wanted to share :)

Food
Posted by Christopher R Taylor at 8:38 AM

I got a little bogged down in his extremely long arguments with this Thersites character, but he's often very fun.