"A lie gets halfway around the world before the truth has a chance to get its pants on."
-Winston Churchill 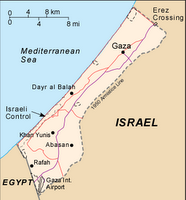 Earlier this month, headlines howled about a bomb that went off on a beach in Israel, killing seven palestinians and wounding dozens of others on June 9th. Babies die as artillery barrage hits families on picnic beach cried the London Times, beginning its article like this:

ISRAELI artillery fire killed a Palestinian family who were picnicking on the beach in Gaza yesterday, as the shoreline was packed with people on a Muslim holiday.

Body parts, bloodstained baby carriages and shredded holiday tents were left strewn on the sand near Beit Lahiya, in northern Gaza, after the late- afternoon strike that killed at least seven people, thought to include the parents and children of one family.

Other news organizations had similar headlines:

“There has been much speculation about the cause of the beach killings, but the evidence we have gathered strongly suggests Israeli artillery fire was to blame,” said Sarah Leah Whitson, director of the Middle East and Africa division at Human Rights Watch. “It is crucial that an independent investigative team, with the necessary expertise, verify the facts in a transparent manner.”

Two days later, they followed up with another article that alleged that the evidence implicated the Israeli Defense Force in the tragedy:

“The likelihood that the Ghalya family was killed by an explosive other than one of the shells fired by the IDF is remote,” said Marc Garlasco, senior military analyst at Human Rights Watch. “This new evidence highlights the urgent need for Israel to permit an independent, transparent investigation into the beach killings.”

However, the story did not turn out that way. Not only was the artillery barrage in response to a rocket attack by Hamas ended before the blast occurred, but the blast crater was consistent with buried ordnance, and shell casings were not from artillery used by the IDF. Further, as Honest Reporting points out:
Now, Human Rights Watch has issued a retraction. Adloyada blog carries the story:

It was Mark Garlasco of Human Rights Watch who was more than anyone else responsible for casting doubt on the official Israeli enquiries findings, that the tragic June 9th deaths of a Palestinian family on the Gaza beach were not caused by shelling they had done earlier.

She goes on to note a recent change:

In my most recent post on the contradictory IDF and Garlasco explanations, I reproduced the Human Rights Watch report of Garlasco's findings verbatim. It actually relied heavily on Palestinian witness and bomb disposal staff statements about the timing and location of what they claimed was the shelling they witnessed.

Now Human Rights Watch and Garlasco have admitted that the IDF account "cannot be contradicted". Without directly saying so, they have conceded that despite Garlasco's previous assertions, the deaths were not directly caused by artillery shelling as they had claimed.

The blog article ends with these questions:

And I wonder if Chris McGreal of the Guardian, Donald McIntyre of the Independent, and the BBC News web site will now report in full Garlasco and Human Rights Watch's latest statements that the Israeli forces invest such effort not to harm innocent civilians and were correct in stating that an errant shell did not cause the killings.

And will they raise questions about the Palestinian witness evidence they so graphically reported, which had barrages of shells landing in the midst of the family on the beach?

Or will they raise questions about why the Palestinian authorities permit families to use a beach which they must know is likely to have unexploded ordnance lying on it?

"Or will they raise questions about why the Palestinian authorities permit families to use a beach which they must know is likely to have unexploded ordnance lying on it?"

First of all, they don't care.
But also, Palestinians and Beduins, both inside Israel and in the territories collect scrap metal. It wouldn't be strange that one in that family touched a dud and it exploded.

Every year, at least a dozen people die in Israel because of this. (I remember two recent cases)
-by Fabián

The Palestinians put on the full court press here. Unfortunately for them, the IDF broke the press and got a slam dunk at the other end.

I think it is in part because Hamas' popularity is dropping, and the revelation that they murdered this group of beachgoers would not have helped matters at all. We generally see that these eye-witness accounts are less than reliable, but Hamas went further here and apparently fabricated evidence.

Another point - the HRW smears the IDF in their initial press release:

However, such internal investigations by the Israel Defense Forces (IDF) have generally fallen short of international standards for thorough and impartial investigations and have rarely uncovered the truth or held to account the perpetrators of violations, as documented in a 2005 Human Rights Watch report, Promoting Impunity: The Israeli Military’s Failure to Investigate Wrongdoing.

At the same time they rely on a group that is even "less thorough and impartial" (read: has been busted fabricating evidence and lying through their teeth).
Now that the group has, once again, been busted lying through their teeth, hiding evidence and in all probability fabricating it as well, will HRW note this in their revised report? Will they note that this happens regularly? Most importantly, will they document it in a 2006 Human Rights Watch report perhaps titled, Libelous Deception: The Palestinians' Penchant for Deflecting Blame and Fabricating Victimhood.
-by Dave in DC


Per an earlier post, just how much credibility do we give to an organization like HRW, that admitted after Saddam's fall that it knew of such outrages as the special childrens' "holding facility" at Abu Graib, but kept silent for fear of being kicked out of the country and thus be unable to do anything to help.
-by Lynne


In a book on the accusation of poisoning schoolgrils in Jenin in 1983 (Poison), Rafi Israeli described the Israeli (and more broadly the Jewish) condition. When the accusations came out, everyone was on it. When the refutation came, the Israeli media reported it, the Arab media denied it and the Western media fell silent. Israel is caught between libel and silence.
-by richard Landes

A commenter at IsraPundit asks a good question as well:

I think there is a bigger issue here than the attention-getting behavior of Marc Garlasco. HRW has but three people on the ground in Gaza - Garlasco being one of them. This suggests that HRW has to rely on Arab/Mulsim informants to get the information about when and where rockets are being launched and when and where IDF rounds are being received. How does HRW fact-check the information they are getting from the Arab/Muslims in Gaza? Furthermore, there is a distinctly Arab/Muslim tradition of Taqiyya that basically encourages outright lying during times of warfare. Given, the few HRW men on the ground and the propensity for Arab/Muslims to lie, how can the media so readily trust anything HRW says.

Israpundit readers might also note that one of the MiddleEast people at the HRW offices in NY, Assef Ashraf, doesn’t think the Qassam rockets are really rockets at all. Rather these homemade devices are more like pipebombs. Comments like these are enough to instill a lot of confidence in you, huh? Again, this is the organization that has been quoted by all of the major news media.
-by determined in dallas

All too often the lie that Churchill describes is helped along on it's journey by news media who want to be first on a story and carry something sensational but are reluctant to print retractions and tend to bury them on pages people won't see as readily. Often TV news media will not offer retractions at all, except somewhere on their blog, tucked away. I understand that errors are inevitable, but some carry a higher price than others, and sometimes errors become factoids - falsehoods repeated so often they are accepted as truth. Certainly news media has some kind of responsibility here, don't they?

Israel
Posted by Christopher R Taylor at 8:00 AM

"All too often the lie that Churchill describes is helped along on it's journey by news media who want to be first on a story and carry something sensational but are reluctant to print retractions and tend to bury them on pages people won't see as readily. Often TV news media will not offer retractions at all, except somewhere on their blog, tucked away."

Spot on, CT. They need material, the more sensational the better. But retractions hurt their pride.

This page is fantastic, what you show us is very interesting and important, do you want to see something more? Look: Great investment opportunity in Costa Rica: hotel in jaco beach, jaco beach review, apartment beach jaco rental. Visit us for more info at: http://www.jaco-bay.com/