"You give 100 percent in the first half of the game, and if that isn't enough in the second half you give what's left."
-Yogi Berra 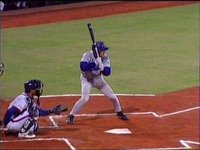 Baseball Crank is a madman for stats, constantly breaking down information from baseball into interesting and unusual analysis. For a baseball stat junkie, his site is glorious. For others, it's an oddity. Recently in an article he brought up an interesting point about baseball that's often overlooked:

There are four components to offense in baseball. Getting on base and batting for extra bases are the two biggies. Next is advancing once on base; the fourth is avoiding losing runners on the basepaths. The fourth is probably the one that flies furthest below the radar; it may be thought of as something that doesn't show in the box scores, but at least two components do: GIDP [Ground Into Double Play] and Caught Stealing.

He does an analysis of each team in baseball by their ability to move base runners and keep them on the bases, thus having a better chance at scoring. The New York Mets are the best at this (at this point in the season), with the Reds, White Sox, Indians, and Red Sox being the top five, in order. Presently, baseball's standings look like this, by division (as of this posting):


Detroit ranks near the bottom of the Crank's analysis, just below the Athletics, but the rest of the teams are in the top third. Commenters analyzed this information:

the Mets are over 2 standard deviations under the avg in "GD%" (lost runners), and 3 std devs above the avg in "SB/SH". A bit of a garbage stat, and probably not normally distributed, but still, they DO move runners along. Too bad they are still first in the NL in OPS but 2nd in runs scored to L.A., who as a team have some GREAT clutch stats so far!
-by Tom H

Interesting. The Tigers don't seem to think much of your theory...making their season all the more impressive/curious/astounding.

They apparently really ARE winning with pitching and defense just like the announcers endlessly remind me.
-by Mister Furious

And power. The Tigers depend heavily on power.

Hey, I didn't say this was the most important part of an offense, just one factor. It's part of why the Mets and White Sox and Reds are winning. The Tigers are relying on other tools.
-the Crank

Great stuff, Crank. I figured the Mets' excellent baserunning was helping them out somewhere. This gives a clue.

Their 84% success rate in steals (as they lead the league in SBs) helps a lot. Plus, leading in slugging by a sizeable margin can't hurt either.

My post on the Mets today addresses this stuff and more.
-by Mike

And power. The Tigers depend heavily on power.

True enough. At first glance they don't have any league-leading homer types, but they do have several guys in double-digits.

I gotta add, I've been out here in MI five years, and the baseball has been dismal. It's really fun this year with the Tigers playing the way they are. It's like the Morgan Magic Sox the way they are pulling out games on a regular basis...
-by Mister Furious

If this information could be combined with an analysis of defense and pitching, you could have a nice metric for predicting winners. At present my guess is a Mets v White Sox World Series, with the Reds and Detroit putting up a great fight in the playoffs.

I'd like to take this time to send my best wishes to the Peter Gammons family and his friends. Mr Gammons is a baseball analyst for ESPN and a long-time writer. He had an aneurysm on the 27th and is in intensive care at present. You are in my prayers.

Sports, Baseball
Posted by Christopher R Taylor at 8:07 AM