MISTER A is MISTER A 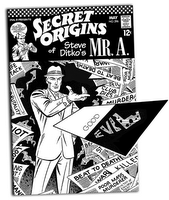 Steve Ditko is one of the most honored comic book artists of the late 20th century, his most famous work being the creation of Spider-Man with the legendary Stan Lee. With a career spanning over 50 years starting in 1953, Ditko worked with Stan Lee and Jack Kirby creating Marvel Comics' most famous and memorable characters. His art style was less stylized than Kirby's, lending it well to the more down-to-earth Spider-Man. Spider-Man was the first superhero to have a complete mask, concealing his identity totally, which features in Ditko's philosophy of the hero.
Steve Ditko was an avid Ayn Rand fan, reading Atlas Shrugged when it was a best-seller in the early 1960's, and this outlook greatly shaped his view of life and ideas. From this philosophy, Steve Ditko came up with two characters. First was The Question for the now-defunct Charlton comics.

The Question was a detective and crime fighter who wore plain clothes, but had a special featureless mask that covered his whole face. When The Question put it on, he triggered special gas that obscured him, changing the color of his clothes and adhering the mask to his face. He'd leave a special calling card behind that when touched let this gas off and revealed a question mark.

The Dial B for Blog comic book blog notes this about The Question:

Although The Question represents a somewhat watered-down embodiment of the Randian creed, the character was Ditko's first attempt to blend Randian Objectivist philosophy with the superheroic ideal. The Question is like a prototype, or try-out version of Mr. A., an expansion of Ditko's favorite theme of heroic loner vs. corrupt society. The Question also features a few other devices introduced by Ditko during his Spidey run -- a featureless mask, and use of a special gas.
The Objectivist Hero is one which sees reality in stark, absolutist terms - appealing to an external standard of absolute morality. Ayn Rand describes her philosophy this way:
Steve Ditko took this philosophy to heart, and tried to craft a hero that exemplified these ideas. What he came up with is Mr A:

"The word "we" crushes all beneath it, and that which is white and that which is black are lost equally in the gray of it."
"I need no warrant for being, and no word of sanction upon my being. I am the warrant and the sanction."
"You must choose one side or the other. Any compromise between good and evil only hurts the good and helps the evil."
"A is A."
No! Wait! Make that... "Mr. A. is Mr. A.!"

How does this work out in practice? Here is one panel from the first Mr A comic known as "Angel" from the third issue of an independent production "Witzend" in 1967. Dial B for Blog has the entire 5-page comic in larger size for easier viewing: 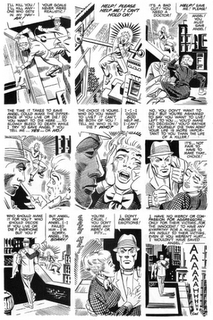 With this character, Steve Ditko had his Objectivist Hero, and as time went on he published several more issues, each with more and more exposition until he finally put out the almost all-text Violence, the Phoney Issue!

So what about this obscure character, right? I hadn't even heard of him until yesterday and I've been a comic book fan for decades. Well you know him better than you think. When Alan Moore wanted to write Watchmen, his original idea was to use Charleton comic book characters, which DC comics had recently bought the rights for. They weren't being used and he thought he could take them in an interesting direction. DC declined, so Moore created variants - very similar variants - of each character and molded them for his worldview and story.

Moore tells the story of the most popular and successful character he created for the Watchmen limited series, Rorschach from a Blather.net interview:

"There was a guy with a hat and a mac, that was the Question, who was also very similar to Steve Ditko's far more right-wing character, Mister A, that was too right-wing to put in mainstream comics but which Ditko had published some strips about in independent comics at the time."

Alan Moore has some very strong views of the Mister A character: 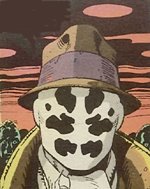 "Mister A was an absolute insane fascist but done absolutely straight."

Later in the interview, Moore reveals a discussion with Steve Ditko about the Rorschach character:

Steve Ditko's Question/Mister A, Rorschach is a kind of logical extension of that character but I'm sure it's not one that Steve Ditko himself ever imagined, in fact I did hear that someone was interviewing Steve Ditko and asked him whether he'd seen Watchmen and this character in it called Rorschach and he said "Oh yes, I know that, he's the one who's like Mister A, except Rorschach is insane." [Laughs] I thought, well yeah, that's about what I'd expect! Well, Mister A wasn't, presumably.

In the end, Rorshach takes off his mask, refusing to capitulate with the evil scheme of Ozymandius like the other heroes, and dies, unchanging from his viewpoint. In the Randian scheme, this unmasking reveals him and discards his place as the undefeatable objectivist hero without ego.

Another character that was influenced and inspired by Mr A is the Dark Horse Comics character X. X too has an absolute code of justice, implacably hunting down and meting out justice according to his code, and working to an absolute control of the corrupt city he dwells in. Like Mr A, X has a mask that locks in place and is unswerving in his goals.

Where is this going, other than a geekfest history of obscure comic characters? Well, Marvel Comics has begun a summer event in their comics universe, with the United States government requiring all superheroes to register their real identity, powers, and costume. Some heroes will do so, some will not. This brings up some discussion and thought on the legality of superheroes, the idea of secret identities in court, and lawsuits in general.

A major plot point of The Incredibles was that frivolous and punitive lawsuits forced the heroes (and theoretically the villains) into hiding. Such an outcome is not so hard to imagine given today's overly litigious society. Certainly scenes such as in Superman from 1978 when at the end Superman airlifts Lex Luthor directly to a penitentiary defy logic and legality. Comic books regularly have battles that destroy city blocks or even entire cities, often simply due to mistaken identities, with no apparent repercussions.

To a certain extent, these extralegal activities are required for the genre to exist - like magic has to be presumed for a Fantasy story to be possible such as Lord of the Rings. But modern readers seem to be less tolerant of over-the-top illegality or silly events where a city is half demolished and totally repaired the next day. Marvel Comics even came up with a government agency of superpowered construction workers that repaired superhero battle damage and insurance for said threat is mentioned in Astro City comics.

How far will this push to realism (or at least greater believability) go? To make a world or comic book too believable will demolish any sense of fun. Having our hero get sued and hounded by cops constantly with the bad guys laughing at him and constantly going free would grate on most readers. Marvel Comics is apparently trying to explore this to some degree, but is it a real desire to study the idea of secret identities and legality of superheroes or is it a barely-veiled morality play criticizing the present administration?

Comics
Posted by Christopher R Taylor at 7:46 AM