"In the 1500's a ravenous people went to north Africa and murdered millions of innocent men, women, and children."
A few years back on a lazy day, I remember my brother was flipping around through channels until he got to a cable access show, where a well-dressed black fellow was talking about Yahweh.he stopped and we watched The Universe of Yahweh a while, but the man's talk was largely incomprehensible. I got the basics out of it, that they believed this imprisoned guy named Yaweh Ben Yaweh was the returned son of God, and that members of this religion liked to name themselves in combinations of the word Yaweh and Jewish/Arabic sounding combinations of names. They were on once in a while and never made much more sense, then the shows disappeared and I figured they were gone (the show apparently still runs in the San Antonio area) 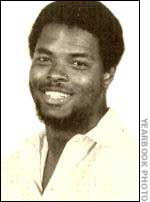 But they were not gone. Former soul stars Bobby Brown and Whitney Houston were reported by Fox News to have ties with this odd cult, which is led by Hulon Mitchell jr, calling himself Yahweh Ben Yahweh. NFL defensive end and college football hall of famer Robert Rozier (calling himself Neariah Israel) was a member as well.

Mr Mitchell was arrested and convicted under the RICO statutes for racketeering although the murder charges resulted in a hung jury. In the trial, Rozier testified that he personally killed a man to be accepted in, and that Mitchell demanded this of any new cult member - the proof being a piece of their body such as a finger, ear or even a head. All of these people put to death were whites, called "white devils" by Mr Mitchell. Mitchell served 10 years of his 18 year sentence and is now on parole, released September of 2001. The group claims to no longer hate whites. 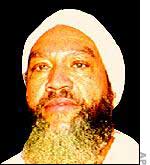 Mitchell's cult is an offshoot of the Black Hebrews, one even more radical than that organization, a murderous, racist cult that trains it's members for war and required killing either a white man or a defector from the cult to join. At its height, it controlled an $8 million empire of properties, including a Miami headquarters known as the ''Temple of Love'' and temples in 22 states.

This may be the cult that the recently captured Miami 7 terrorists may have belonged to. Relatives described the defendants as deeply religious people who studied the Bible and took classes in Islam. According to the Miami Herald:

A man who lives across the street from the warehouse described the suspects as an unusual group of men, almost cultist, who wore military-style clothes and kept to themselves. The man would not give his name for fear of retribution.

"They reminded me a lot of the followers of Yahweh Ben Yahweh," he said, referring to a cult that flourished in Miami's Liberty City in the 1980s

"They would be gone all day and come back at night to the warehouse to sleep. They sold shampoo and hair grease on the street, just like the Ben Yahweh people," he said. "They were not threatening, but nobody messed with them."

It is also speculated that these men were part of the Moorish Science Temple of America, although their stated goal to kill as many white devils as they could seems to conflict with the stated motto of this group: "Uplifting Fallen Humanity by Learning to Love Instead of Hate." But then the Yahweh Ben Yahweh website says "Yahweh Ben Yahweh (in Hebrew characters) is hereto establish peace and good will toward all god-loving men." Of course, that last clause does leave some leeway toward those considered to not be god-loving.

The Miami group fed homeless in the area and helped people find jobs, they also would let people sleep in their warehouse. And they also plotted with FBI agents, who they believed were from al`Qaeda, to destroy the Sears Tower, although they lacked the funds to pull off the attack.

In any case, it should be noted that not only does the US have dangerous religious fanatics who hate the country and the government living in it, terrorism does not come exclusively from Islam. What these men believed and taught is likely a blend of several religious influences, including Nation of Yahweh and Moorish Science Temple teachings, like Yahweh Ben Yahweh was an offshoot of the Black Hebrew cult.

On the Black Cults blog, there is this comment from a Nation of Yahweh member, who reveals the violent judgment against whites will come, but from a future, prophesied, an unknown person who they look forward to:

To whom YHWH will judge,

In the 1500's a ravenous people went to north Africa and murdered millions of innocent men, women, and children. Then took the leading remnant of those same people and enslaved them. Made them work in bondage to build an uncultivated stolen piece of land that we now call America.
YHWH told his son Abraham that this would happen to his people and that they would remain in the hands of the ravenous nation for 400 hundred years(Acts 7:6). Once the 400 hundred years was up he would rescue his children out of the hand of the wicked and then in turn judge the wicked for their utter attrocities against his people. Through out history YHWH has sent various differant men to bring his people messages of hope and a feeling that he is still there watching and waiting.
In this day, a day that has been foretold about since the beginning;
the GREAT DAY OF YHWH, is finally at hand. It is the day that YHWH has sent his sons to gather true Israel together and judge Israel's captors. The United States Government made a grave mistake when they interfered with this process. Yahweh Ben Yahweh is one of the men that has been chosen by YHWH to follow through with the prophesied return of YHWH's people to YHWH. Just look at his works, he cleaned up one of the worst cities in America and gave a broken people hope and dignity again. Yahweh Ben Yahweh is the Prince of Peace the one chosen to gather and educate the mentally dead people of YHWH.
The Peaceful One!
The question that really should be asked is; Who is the other son the one that has been given the NON-PEACEFUL task? JUDGEMENT!
The one who YHWH has chosen to rescue Yahweh Ben Yahweh and YHWH's chosen people from this Godforsaken place and then bring down the most horrendous act of GOD that has also been prophecied. Some call it the apocalyse, some call it the great slaughter, some call it YHWH's great day of vengence. Whatever you choose to call it it must come to pass. Moreover someone must bring it to pass.
But Who? This mystery drives the rulers of this wicked nation insane. Yet,the most digusting part of this is that they know that their end is eminent but are refusing to tell the people of America the truth about the things that are happening.
There are some questions that need to be asked but you are not asking the right ones and because you have falsely accused a man of YHWH without knowing or admitting the facts willingly YOU WILL BE JUDGED!!!
Here are some relevant qustions:
>Who are the so-called black people of America?
>Why were they brought here and forced to build this country?
>Why hasn't this nation recognized their vicious hand in all of this and made ammends for their wrong doings against this group of people?
>Is Yahweh Ben Yahweh really guilty of the crimes that this Gov't has accused him of?
>What are some of the things he was doing to help black people before they took him down?
FINALLY
>Who is here to make right what has been wrong for hundreds of years and bring down YHWH's final judgement on the wicked?
-by Deborah

She's right, a group of people did go to Northern Africa and enslave and oppress the locals: Muslims. And they are still doing it.

Terrorism, Cults
Posted by Christopher R Taylor at 8:12 AM

A scary group indeed. Murder and hatred of other races a requirement for membership? Move over KKK.

Has any further info come out about the motivations of the 7 arrested? I had read that they had taken a pledge to al-Qaeda.