"I think the lesson the US carmakers are learning is (same as Apple computer) 'Throw out the focus groups and build what you know is right.'" 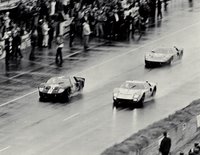 Back in 1966, the story goes, Ford offered to buy Ferarri and the deal was almost done when Ferarri backed out. Ford was said to be so annoyed he commanded his design division to come up with a car that would beat the LeMans-dominating Ferarri. The result was the Ford GT MkII, not only a beautiful car, but an amazing racer. The first year it ran, Ford won first, second, and third place. For four years straight, Ford won the LeMans, revolutionizing car design and changing the attitudes and minds the world around about American cars.

But for decades, American cars fell into decline and have not won a LeMans from 1969 (although European-built Fords won in 1980 and 1995) until last year. Top Gear considers American cars a running joke and rarely even has one to drive or even talk about.

For two years running, however, LeMans has been won by Corvette.
Yes, that Corvette, the plastic bodied-car theft magnet that was long considered nice to look at but likely some sort of compensation for bodily shortcomings among middle-aged men. From the Corvette Racing website, here's the story:

The team celebrated Corvette's 45th anniversary at Le Mans in style, finishing fifth and sixth overall. Corvette Racing turned back the challenge of the Aston Martin team in a hard-fought battle that often saw all four cars on the same lap. In scorching heat, the twin yellow Corvettes completed 349 and 347 laps respectively, scoring the 38th win for Corvette Racing in international road racing and the team's 25th 1-2 finish.

Corvette took 1st and 2nd for the second year in a row, and took 5th, and 6th place as well this year.

GM's Fast Lane Blog has MP3 links for the prerace and race and comments:

Well done! watched every televised minute. The factory Vette first and a privateer effort third. That and the other factory Vette at least made it to the finssh line with its head held high. Job well done by all.

Now if only you could get Cadillac to the same competitive level as the Audi R8/R10 in the LMP1 class then GM would really stand astride the world's greatest endurance race.

Come on Cadillac! GET IN THE GAME!
-by Bwright

racing improves the breed but only if you apply the lessons learned in racing to the road cars you sell. the c6 corvette is an excellent example of this but the lessons you learn can be applied to more of your products. rember, a racing program is never too expensive if you use the knowledge to make better cars. congratulations corvette racing and good luck in the future.
-by josh

I hope this will be a basis for Chev advertising.
New York Times center spread
Picture of cars in winner circle w/something like this.
"...Chev C6r; no hybrid--all chevrolet..."
Do It (more fun than arguing about the word "rubbish")
-by Dennis J Gallagher

Racing
Posted by Christopher R Taylor at 10:23 AM