"Axl has made similar claims.Only to leave the fan's with nothing."

Heavy Metal giants Guns 'n' Roses ruled the charts in the early 90's. When their first record Appetite for Destruction came out, it went gold (sold 100,000 copies) before getting a single song played on the radio. Their style of hard, driving rock and roll was a stark contrast with the "whites" in what was being claimed as heavy metal at the time (White Lion, Great White, Whitesnake, etc) and was what rock and roll fans were so hungry for.
However, Axl's manic-depressive personality and wild unpredictable tantrums basically ruined the band's career and their followup albums were successively and increasingly disappointing, like the cryptic Spaghetti Incident? This CD was described by the band a punk record of songs they loved when they were growing up, songs that influenced their music. But when the record came out, it was packed full of obscure songs from bands few had heard of. Guns 'n' Roses all but broke up, with the talented lead guitarist Slash leaving the band and rhythm guitarist Izzy Stradlin putting out a series of solo albums.

Now, according to Metal News, G'n'R has not only a new album coming out, but is planning to tour: 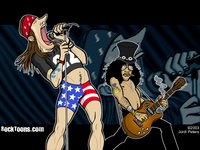 As previously reported, GUNS N' ROSES looks likely to return for more U.S. shows this autumn, possibly starting in September, according to a press release. Following the band's recent four-night stand in New York City, their first live shows since late 2002, singer Axl Rose said, "We've just finished our four shows in NY and had an amazing time. NY has always been special and it feels great to be doing this again particularly in front of so many friends. I am very excited about Europe and getting back over here in September."

The group, which features no original members from its classic lineup other than Axl, began a run of European festival shows today (Thursday, May 25).

Axl Rose has been saying that the band's long-delayed new album, "Chinese Democracy", will be out later this year.

Commenters had this to say about the news:

Won't be the same without the original band members - that element of uncertainty and pure "combustability" is missing - not to mention the fact that Slash is without a doubt the best guitar player on the planet! Shame - looks like Axl is just trying to make some extra bucks, living off yesterday's reputation.
-by Paul_Doncaster

YEAHYEAHYEAHWATEVERMAN!!!!!!!!!!!!!!!! Axl has made similar claims.Only to leave the fan's with nothing.
-by Blackdog

i think i'm going to agree with psythe and the rest of you guys once i listen to the new guns n roses. but the original line-up was definitely what made guns n roses one of the greatest ever. even if i like guns n roses new songs it just won't be the same for me if without slash.
-by the crusader

I just came from the Rock in Rio in Lisbon and it was amazing, even without the real band it was the best concert, just give them a chance, I cant wait to watch them again in Wembley Arena in July. Come on Axl!!!!!!!
-by E Marley

I just don't get it. Axl can whip it out and piss on his fans and they beg for more. No matter what the guy does people still love him. He's walked off stage, punched fans, taken 10 years to put out a record and no one cares-they just plunk down their hard earned $$$ like nothings wrong...?!???
-by Scorched Earth

I went to the GnR gig in the Hammersmith Apollo and I must confess they were great. It is hard to get used to the band without the other members but Axl is the Brain of it and that will never change. If you have the chance to go and whatch this guys.... GO, you will not regret it.
Axl is 44 but in great form. That is worth it...
Axl Rose and GnR, Welcome back!
-by I Was There...

I'm going to see GnR at Manchester in July - I'm 16 so it just proves that their music spreads to all generations! Granted, the original line-up was, and is always going to be the best sound and I was gutted Slash and Duff weren't gonna be there but hey, so long as Axl's still rocking! I hope the new line-up sound is as good at the orginal and if it is or it isn't it'll still be a good, legendary night!
-by Kobe

I have to admit I was a big Guns 'n' Roses fan, but without Duff and Slash I don't know if this will be worth seeing. In any case, I'm looking forward to the new CD to see if they can pull it off.

Music
Posted by Christopher R Taylor at 9:27 AM

I like this blog is fantastic, is really good written. Congratulation. Do you want to see something more? Read it...: Great investment opportunity in Costa Rica: real estate for sale by owner, rci jaco lodging, rci jaco lodging. Visit us for more info at: http://www.jaco-bay.com/