Never attribute malice to something better explained by sloth or incompetence.
The opening quote for this series of essays is something I try to keep in mind when dealing with the press, among other times. Something may appear to be intentionally harmful, mean, or improper when it is actually just laziness or incompetence. Sloth, or laziness, has been with us since the fall, and is a common tendency of men especially – let someone else do it, I’ll get to it later, this is good enough for now. Sloth is one of the Seven Deadly Sins that formed part of the plot of the movie Se7en:
Sloth makes a worker do the least they can get away with on a job, and the results can be quite damaging in some work. A lazy doctor or airplane mechanic is a disturbing thought, but imagine the mechanics at work in the realm of public information and opinion.

So what does this have to do with the media and bias? The media is no less prone to this sin than any other group, indeed a common complaint of bosses everywhere is that it’s hard to motivate workers, that not only does no one seems to want to do any work but demand more pay and benefits for what little they do. Imagine the harm the ones most directly responsible for defending the public as the “fourth estate” of government can do if they are lazy or irresponsible on the job.

This can show some very tangible, practical results in ways that can be seen every day. Pick up your local newspaper and count how many stories are actually written by someone locally. See how much content of the paper is actually made up of work by reporters and not from a news service such as Associated Press or United Press International or simply a bigger news organization in the state. This lack of effort by even local news organizations results in a lack of real coverage in your area, of events and information that you might want or need to know.

But beyond this, what if a story from the AP wire is biased, is written with a sort of ideological slant? Lacking any editorial effort on the part of the local paper, that slant simply passes through and is reprinted. This can look like local bias when it is from a more central source. In this way, a small number of people can control a large number of outlets of news and information, by having their work uncritically delivered to fill content in the paper every single day in hundreds of places at once.

Sloth can take another path, that of incompetence. The lazy editor will not have strong enough standards to filter out bias a writer may have, letting something through that does not belong in a reputable paper. A lazy editor will not check to see if reporters are corroborating information properly will not examine writing to see if it follows basic journalistic standards established more than a century ago. A news article should contain only what is provable and demonstrated with factual evidence and supported by multiple sources. But opinion pieces masquerading as news will slip through at times, even if it is by a single word:

PUEBLO, Colo. (AP) - A group of 600 Democrats crowded the 4H Auditorium at the State Fairgrounds Friday hoping to see for themselves whether presidential candidate John Kerry's wife was as outspoken and sharp-tongued as some have described her.

Teresa Heinz Kerry delivered for her supporters when she talked back to a heckler who implied her husband's a flip-flopper.

During a question and answer session, a young man demanded to know why Kerry voted to give Bush authority to attack Iraq but voted against an $87 billion appropriation bill to support the war effort there.

"Is that the kind of thing he would do as president?," the man asked.

Ordinarily, someone asking a question in a question-and-answer session would not be considered a heckler unless they were interrupting speeches with mockery and chanting. In this case, however, the reporter identifies this questioner as a heckler, a deliberate term used to demean or reduce this man and his question's significance. This is an example of genuine, deliberate, and avoidable bias that the editor let through. Either the editor was guilty of the same sort of bias, or too lazy to bother to edit the story to a more neutral tone.

Lazy reporters will put as little effort as possible into their coverage, such as visiting the same sources for information again and again. A few years back it was pointed out that The New York Times was interviewing the same “random man on the street” repeatedly. The same guy was used for quotes that were of a certain bent of ideology, and presented as a generic person on the street. Was this deliberate, or was it simply easier to grab the guy that sells gum and magazines in the lobby? This is where what appears to be bias can simply be sloth instead.

The reporter may very well have no intention of filing a story with a heavy ideological slant, but is too lazy to be bothered to check the story they have to see if it’s reasonable or accurate. They have other work to do, or simply don’t care how accurate it is. To some degree ideology might lead them to check less carefully some information than others because it fits what they presume to be true (see Credulity below for more on this idea).

The best example of this is the infamous Texas Air National Guard story on CBS' 60 Minutes II, affectionately known as Rathergate in the blogosphere. Most will remember it well; shortly before the 2004 national elections, Dan Rather released a blockbuster news story, a paper that was said to be a memo from when President Bush the younger was in the Texas Air National Guard (TANG) in the late 60s and early 70s, with criticism and complaints by his commanding officer about delinquency, insubordination, and most importantly, being Absent WithOut Leave (AWOL).

The memo was rapidly demonstrated as not only a fake, but a very poorly crafted, childish fake. This could have been done by CBS rather easily, it was simply a matter of understanding the military to even a small degree, investigating the times involved, the typesetting, and even looking at the Post Office Box number (34567 didn't stand out to anyone?). They called up a forgery expert on the phone and asked a few questions, and that was as far as their investigation went, according to Mary Mapes and Dan Rather at the time.

Now, it's possible to trace connections between Democratic Party operatives and CBS employees and construct elaborate theories about deliberate misleading and intentional falsehood, but following my quote at the top, the most likely answer is that CBS simply wanted this to be true and didn't bother looking into it too carefully. They found something that fit what they believed to be real, that fit what they believed and wanted to be true, and were unwilling to take even minimal effort to confirm the document's veracity.

This extremely famous example of legacy media failure is a classic portrayal of sloth that appears to be bias. It likely was the result of bias, but the problem was not the bias (the insistence in the lack of evidence or reason to believe that President Bush was AWOL), but rather the laziness demonstrated in investigating this story. And the TANG incident is hardly unique. Why to this day the CBS team refuses to admit the story is fake is a matter of some conjecture, and another sort of essay entirely.

The most famous example of sloth in journalism most recently is Jayson Blair who was supposed to have been sent to Iraq to report on the invasion and rebuilding, but was instead reporting from Manhattan while enjoying the town. This was dealt with by firing the lazy reporter, but it also was a problem with the editor and the rest of the news staff, who should have noticed problems in expense billing and such. Because Jayson Blair was black, many think that examination and critical editing of his work was less strenuous and the editors were less inclined to notice things that might have resulted in another reporter being fired.

As one New York Times writer tells Salon: "This really is a story about race." Underlying the comment is the suspicion that a reporter with a well-documented history of inaccuracies and erratic behavior was able to not only keep his job but also secure plum promotions, because the Times, in the interest of newsroom diversity, was committed to a fault to attracting, and retaining, black journalists.

Sloth in some jobs is inexcusable; they are too important to society and people rely on them too heavily for someone to slack off in the job. Air Traffic controllers, for instance, can’t shrug off half their work and play Gameboy© rather than watching the radar. But for the media to be lazy simply prompts people to seek other sources for their news. Sources that take more time, have more passion and interest, and are more keen on accuracy, or at least quicker and more faithful correction.

In a way, sloth is worse than bias, because while bias presents the facts in a slanted, ideological driven way, sloth simply will fail to report the facts or report falsehood as fact. 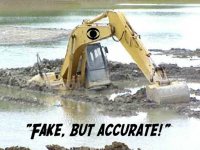 Next week: Incompetence and Credulity

Essays
Posted by Christopher R Taylor at 7:57 AM