DEFICITS NOW HALF OFF! 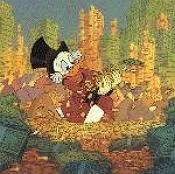 In January of 2004, President Bush vowed to cut the deficit in half by 2009, among other plans. At the time, analysts were skeptical:

But in an independent analysis of that budget, the nonpartisan Congressional Budget Office concluded it would not fulfill that promise. The deficit in fiscal 2004, which ended Sept. 30, was $413 billion. Under Bush's plan for spending and taxes, the deficit would be $258 billion in 2009. If anything, that may understate the size of the deficit in coming years because it does not include any additional costs for the wars in Iraq and Afghanistan. The Pentagon is expected to seek an additional $70 billion early next year.

CBS News reported on this plan with similar dismissal:

Democrats say that even if Mr. Bush achieves his objective, he would leave huge shortfalls because he has driven deficits so high. Mr. Bush took office when large surpluses were projected for the foreseeable future, a forecast since dashed by recession, the costs of fighting terrorism and wars, and tax cuts.

"It's like so much with this administration in respect to fiscal matters, it's all spin, all the time," said Sen. Kent Conrad of North Dakota, top Democrat on the Senate Budget Committee.

And ended with this quote:

"It's not a plan, it's a set of wildly optimistic assumptions," said Robert Bixby, executive director of the bipartisan Concord Coalition, which lobbies for balanced budgets.

However, today a report from Investor's Business Daily contradicts this analysis:

Aided by surging tax receipts, President Bush may make good on his pledge to cut the deficit in half in 2006 — three years early.

Tax revenues are running $176 billion, or 12.9%, over last year, the Treasury Department said Monday. The Congressional Budget Office said receipts have risen faster over the first eight months of fiscal '06 than in any other such period over the past 25 years — except for last year's 15.5% jump.

How is this possible? President Bush and the Republican-controlled congress cut taxes, which means the federal government gets less money, right, that tax revenues are reduced? Well, true... at first. Government revenues did initially drop, as one would expect. But as the tax cuts took hold, the economy took off, and for months has had growth and low unemployment. As Investor's Business Daily reports:

A CBO analysis last week noted that withheld individual income and payroll taxes are up 7.6% from a year ago, with the gains picking up in recent months.

"Those gains suggest solid growth in wages and salaries in the national economy," CBO said.

It works like this: when taxes are cut, business owners can earn the same amount of money and keep more. They spend this extra money, usually on their business and in investments, which gives other business revenue. This investment in a business means they can expand, and hire more employees, and pay the ones they have more. This lowers unemployment, stimulates the economy, and ends the brief recession that began at the end of the Clinton years.

When unemployment reduces, then people looking for jobs are in a better position - businesses have to compete to get workers, and will pay better to attract them. That means people make more money as the economy does better, all because of tax cuts. And when everyone makes more money, then they pay more taxes, even if the rate is lower. Because they're taxing a larger amount of money the percentage can end up gathering increased revenue.

A CBO analysis last week noted that withheld individual income and payroll taxes are up 7.6% from a year ago, with the gains picking up in recent months.

"Those gains suggest solid growth in wages and salaries in the national economy," CBO said.

While gains are broad, those at higher-income levels are enjoying bigger salary hikes. Because they pay higher rates, federal tax revenues soar when they do well.

The IRS has data available on their website about who pays taxes and how much, in an Excel file. In this information you can find out that the top 50% earners in America pay over 96% of the taxes. The top 1% in America pay over 34% of the taxes. In other words, the rich pay the greatest share by a huge margin, and as such, when they are encouraged to spend and invest, then this affects the tax revenues by a significant margin.

To put it simply, rich people don't put their money in a big vault like Scrooge McDuck and swim around in it, they spend it, like you and me. They buy things, they hire people to do things for them, they invest in other businesses. And those people are not rich, they're you and me. As CavalierX notes, these people are your boss, they pay you and that lets you pay your bills. When the rich get richer, then "a rising tide lifts all boats" as John F. Kennedy said when he called for tax cuts. 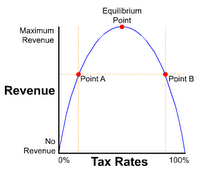 I know this is sort of dry and boring stuff, but it really does make a difference. Tax cuts stimulate the economy, increase government revenues, and everybody wins. Does this work without limits, can we cut taxes to 0% and maximize our government revenues? Naturally not, the effect is described as a curve the Laffer Curve, which describes how revenues increase as you cut taxes, then drops off once you pass a certain point.

As you can see over the last few years, the Laffer Curve is in effect generating increased revenue, which demonstrates empirically that we're on the leading edge - tax cuts are working. There is a point at which this will not work any longer, and we're close to that point, I believe. But we're not at it yet.

I want a flat tax is that to much to ask. I may be simple but I really think a flat tax would work and solve a number of finanical problems.

I actually like a VAT but if that wouldn't work, a flat tax is certainly better than what we have now.

I may be missing something. What is a VAT?

I like how they all indicate that this is in spite of the tax cuts, rather than partly due to the tax cuts.

A VAT is a Value-Added Tax, it's basically a sales tax that is added in before purchase; when you look at the price tag, that's the actual price.

It has the drawback of being basically invisible, with the benefit of being less annoying and unpredictable at the cash register.

Good point about the surplus, it was a projected surplus, if trends continued as they were during the 90's. And this was caused exclusively by the GOP congress balancing the budget (and President Clinton signing the budget, one thing to praise the man for, even if it was grudgingly), despite tax increases.