"Polars bears must not live on Coca-Cola alone, after all." 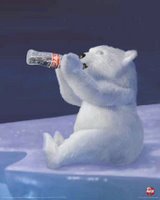 As we all know, bears are gentle, kind creatures who frolic with butterflies and save children from more savage predators like the cruel whitetail deer or the brutal newt. Television shows such as Gentle Ben and the lovable mascot of forest fire prevention Smokey the Bear all help us understand this kind, sweet nature.

Sadly, callous industrialists and Republicans have conspired to wreck the planet so much that global warming is making these ordinarily peaceful animals turn savage themselves!

Polar bears in the southern Beaufort Sea may be turning to cannibalism because longer seasons without ice keep them from getting to their natural food, a new study by American and Canadian scientists has found.

The study reviewed three examples of polar bears preying on each other from January to April 2004 north of Alaska and western Canada, including the first-ever reported killing of a female in a den shortly after it gave birth.

OK all kidding aside, the study admits that:

The World Wildlife Federation was covered by the Times Online with the story Polar Bear Plight Worsens:

The chemicals are causing serious health problems for wildlife that dramatically reduces its chances of survival in the Arctic environment.

Whales, seals and polar bears are among those found with heightened levels of chemicals in their bodies, according to the WWF report. Effects include suppressed immune systems, weakened and deformed skeletons, cancers, vitamin deficiency and changes in behaviour.

Tim Blair, always one for a wry comment, wonders:

Deformed skeletons? Changes in behaviour? Perhaps they’re evolving. Anyone checked for the appearance of fins?

And the recent movie An Inconvenient Truth featured computer footage of polar bears unable to reach vanishing ice and drowning in an attempt to portray global warming's threat.

So what's all this focus on polar bears? Why the sudden use of them for examples of global warming? Because this is the new mascot of the climate change advocates, a furry cute creature with lots of great PR from Coca-Cola ads. How can we endanger such a lovable animal? While this is a useful advertising gimmick and likely to capture the hearts of some city kids, those of us from more rural backgrounds are aware of what bears are really like.

Ace of Spades notes an interesting quandary in the CNN article:

Ummm... two paragraphs ago, the article said polar bears killing each other for food was "less common" than than other motives for bear-on-bear violence. Now this, um, "scientist" seems to be alleging bears killing other bears for food has never been seen before.

He's right, here are the pertinent sentences to compare, from two sequential paragraphs (with my emphasis for clarity):

"During 24 years of research on polar bears in the southern Beaufort Sea region of northern Alaska and 34 years in northwestern Canada, we have not seen other incidents of polar bears stalking, killing, and eating other polar bears," the scientists said.

Gee, I hope this isn't a bit of hype to advance the global warming agenda. I hope that the rest of the experts in this article will avoid rhetorical flourishes better delivered from behind a politician's podium than a scientist's lectern.

There you go. Sober and scientific.


When I was writing this up earlier in the week I found two previous instances of polar bear cannibalism. (Does anyone know if they get Google in Alaska?)

Of course, they were careful to phrase the statement to say that they had never seen that behavior in the specific places they were looking. That makes them technically correctly because as we all know, a scientist would never advocate a specific position, he just follows the data, no matter how it may lead him to conclude that manmade global warming is an imminent disaster.

[Planet Moron is correct, the scientist said they'd never seen this behavior in this area which was probably technically true, but leaves the impression it's not know of. It probably would have worked better if the previous paragraph hadn't noted this behavior is known already.]

More like the "bloody fingerprints" of ManBearPig, I'd wager ...
-by Blacksheep

Out of sheer desparation and hopelessness, Polar Bears are also knocking off liquor stores and blowing themselves up in pizza parlors all over Baffin Island.

Damn you Global Warming, damn you!
-by Gordon

The global temperature was higher than the current level prior to the mid-millennium little ice age - I wonder if polar bears were eating eachother back then as well?
-by Scott

I've got them all fooled.

Cubs? Sure. But once they get big, cute no longer applies.

Aside from being well, huge aggressive and deadly, adult bears stink (think dog musk x1000), their fur is normally mucky and matted and did I mention they're deadly?

This is not like the "rottweilers - pet or menace?" debate; bears are beyond any reasonable doubt nothing but lethal, like a big walking cruise missile. Being around bears would be the closest a modern day person could get to reliving "Jurassic Park".

To anyone afflicted with the "bears=cute" syndrome, I highly recommend renting "Grizzly Man". If that doesn't cure you, nothing will.
-by Scott

Polars bears must not live on Coca-Cola alone, after all.

If you read the article, she pushes the global warming thing even more than what Ace quotes. Which, there is definitely nothing wrong with doing research on what the warmer weather does to the polar bears lifestyle. In fact, hey thats great.

But then again, and maybe I'm just assuming the worst in people, but I bet she was thrilled as hell when they found evidence of cannablism. Because valid support or not, that works great in a scare news item to push their cause.
-by T&A

Check out my article on some inconvenient truths for global warming advocates.

Did you know that Mars, Jupiter, and Neptune's moon, Triton, are all experiencing some serious global warming now?

Did you know that all scientists are in agreement that the sun is putting out more heat than it was 100 years and that its heat output has increased most dramatically over the past 20 years?

Could it possibly be that the increase in heat output from the sun could be responsible for global warming on earth and other planets in the solar system?

It's all true, but these happen to be inconvenient truths for Al Gore, the media, and the global warming "scientists."
-by Michael McCullough

The chemicals are causing serious health problems for wildlife that dramatically reduces its chances of survival in the Arctic environment.

Good thing we are busy driving around in our Hummers* and making sure the Arctic Environment ceases to exist - thus saving the bears!
(*and using lots of bold)
-by SezaGeoff

Meanwhile, black bears down south seem to have a much more laidback view of life:
http://tinyurl.com/gleom
(So there’s at least one ursine life-form who doesn’t mind chemicals.)

Whales, seals and polar bears are among those found with heightened levels of chemicals in their bodies, according to the WWF report. Effects include suppressed immune systems, weakened and deformed skeletons, cancers, vitamin deficiency and changes in behaviour.

and a great new taste!.

So they’re easier to catch, domesticate and bone, plus the thirteen secret chemicals™ and vitamin deficiencies make their meat soooo tender - marinated - the way you like it!

And of course the whales have the same chemicals™ as the bears, they’re eating them, remember?
-by Craig Mc 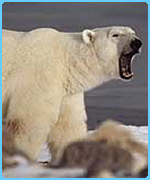 And now, for extra credit: Brian Regan on how bears are portrayed in media:

How bout that show Gentle Ben? You remember that show? About a big friendly bear.
There's a good thing to teach kids.
"Hey, bears are friendly! Go up and let 'em give you a big hug! Put some honey on your face and let him lick it off."
Bears love kids with honey on their heads; they love honey-head kids!
"Hey, Gentle Ben, where's Bobby?"
... Blearrghhh
The bear is wearing Bobby's hat on his head...

Only you can prevent forest fires, but ... seriously, avoid bears. Even cute white furry ones.

Science, News Media
Posted by Christopher R Taylor at 8:39 AM