"Is this a bit of your brain?" 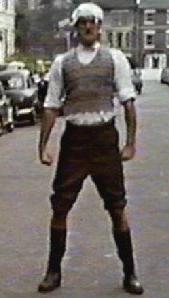 According to the magazine Lifestyle Extra, Actor and comedian John Cleese is retiring from acting.

He told Britain's The Times newspaper: "I can never do better than 'Fawlty Towers' whatever I do. Now I very much want to teach young talent some rules of the game."

The comedy genius - who played hotel owner Basil Fawlty in his cult series set in a run-down Torquay inn - also revealed he is becoming a "comedy professor" and his book will feature as a set text for his "master classes". The actor - who lives in Santa Barbara, California - decided to pen the educational textbook in reaction to the poor quality of today's TV comedy.

John Cleese is known for his work in Monty Python's Flying Circus, but was in a host of other films, and television including the aforementioned Fawlty Towers, Silverado, Erik the Viking, and voice acting in such cartoons as Shrek 2. Born in 1939, Cleese is going to be missed for his comedic timing, genius, and skill at portraying likeable stuffy, self-important, but flawed British gentlemen.

The Movie Blog has this to say:
How can you not instantly smile whenever you see John Cleese come on screen? This man is ninja in the martial art of comedy. I still think my personal favorite performance of his was in the hilarious "A Fish Called Wanda" (which by the way... if you haven't seen it, you REALLY should).

And Commenters at the site responded:

So are they gonna have to get another Q?

This guy is a [explative deleted] genius. It's a shame but, hell, if anyone should be teaching comedy then it should be this man.

I disagree, John Campea. It is not the end of his career. Just another chapter of it.
Just think of what a new crop of actors and comedians can learn from him.

As for Bond's Q, the character wasn't needed in Casino Royale. While M is still Judi Dench, having Cleese return for a cameo as Q is not far out, but they could get another actor.
-by darren seely

You're incorrect. If he stops screen acting... it IS the end of a career.

If a Hockey player retires from hockey... but stoarts coaching hockey, it's still the end of a career (Playing) and the begining of another (Coaching).
-by John Campea

Although Mr Cleese and I do not see eye-to-eye politically, the man is a comedic gem and will be missed in such roles as Nearly Headless Nick in the Harry Potter series. Even short cameos of the man's work were enjoyable. And, at least while being of a different opinion politically he was not annoying about it like some. Now to see about that book he's writing...

Popular Culture
Posted by Christopher R Taylor at 9:52 AM