"we must support the beautiful women of santa cruz bolivia I say.." 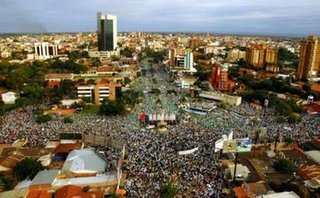 There is a theory that's been moving around the web since the beautiful women in Jordan and Ukraine were photographed and put on blogs all over rallying for freedom and liberty. Whiskey, Democracy, Sexy, one banner read. The theory is the more hot babeage that a movement attracts, the more likely it is to succeed. I don't know how valid this is, but I like the thought of it.

On Publius Pundit (who put two of those lovely lasses in his logo) has a report by Mora A Lyon on a huge anti-communist rally in Bolivia:

Not every Bolivian likes to be under the thumb of Hugo Chavez’s minime, Evo Morales.

Residents of the eastern province, Santa Cruz, which is full of industrious immigrants and enterprising native-indigenous Bolivians who’ve moved there, want instead to have autonomy.

They hate communism and want freedom.

Mr. Lyon writes about the people of Bolivia:

Imagine being a resident of Santa Cruz. Your area is not full of grinding poverty and inability to comprehend the modern world, but of full industrious immigrants who believe in capitalism and freedom.

These immigrants have set up coffee farms (I’m drinking Bolivian coffee as I write this), soya farms, clothing factories, jewelry-making assembly plants, and other things that the global market is happy to buy from Bolivian exporters. They welcome every comer. They’ve also developed their natural gas industry, the continent’s second largest, from literally nothing in 1990 to a major supplier to its neighbors.

Darkening the cloud over them is the specter of Evo Morales. He’s a communist who’s brought in Venezuelan troops. He’s out welfare shoveling from Santa Cruz’s hard-earned wealth, creating vast underclasses dependent only on him. He’s brought in Cuban agents, posing as “doctors” (and putting real doctors out of business!) He’s chased all foreign investment out of Santa Cruz by literally stealing natural gas operations and handing them over to Hugo Chavez’s Venezuelan oil men. And now he is targetting fertile land, specifically Santa Cruz’s hard-developed agricultural land, for “redistribution” to socialist “collectives” to be directed by Cuban operatives, without the consent of any free people.

But at least 150,000 Bolivians rallied today Santa Cruz and took a stand. Here are some of the freedom babes: 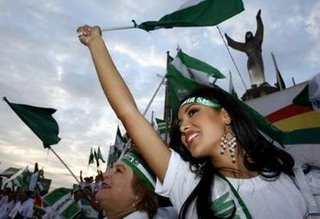 They are fine!!! That one sign sums it all up, “God doesn’t want communism. We want autonomy.” If they don’t secede, hey at least they’ll be marginally free of Morales’s grip, not to mention keep the gorgeous chicks to themselves. What’s with the dark green flag? I know that isn’t Bolivia’s national flag. Is that Santa Cruz’s flag?
-by Matt

The evil American empire must be behind this…. bwaaaahaaaahahahaha

All the best to them. I hope the best for Santa Cruz and hopefully in the future Bolivia.

Our Media once again is failing us. Had I not visited your site - I’d not know this info.

Great job all of you!
-by Michael

[I agree, although I got the tip from the excellent Cuban-American Bablu blog]

Are you sure they were only 100,000? During the pro-amnesty rallies here in the U.S. that crowd would’ve been pegged at least at 500K - it reminds me of the crowds at the L.A. protest.

Great post, and even better for them if they achieve this. It sends a heck of a statement to Evo and his posse.
-by La Ventanita

I’v posted a couple of videos of the event on my website. my favorite is the national anthem/viva Bolivia! one, I just want to share it with the readers .
-by Jonathan

Cambas are the hottest women in Bolivia.

Damn those are nice pics. will have to borrow some.

I am kind of ambivalent on this one, though. In the larger scope of Bolivia, the Cambas are a much needed counterweight to Evo’s silliness. And the region is the most developed in Bolivia.
I am wary of Santa Cruz’ elite - who are behind this movement– and of claims that they were victimized continually by La Paz.
Read my commentary on the issue at the bottom here.
-by Boli-Nica

*UPDATE: changed Georgian to Ukranian babes to be accurate.

I feel bad for anyone who has to live under the heel of a dictator. I hope they will be able to overthrow their oppressor.

The autonomy movement includes other areas of the country as well, western cities of Cochabamba (my home town) and Tarija also rallied the next day.