"What are you going to believe, me, or your own eyes?"
In line with my series of comment types and the theme of this board, I offer you M Sipher's Internet Argument-Losing Bingo! Keep a card handy, and mark off the squares as you encounter an argument in a comment section or message board! Win valuable prizes! Well, at least be amused. 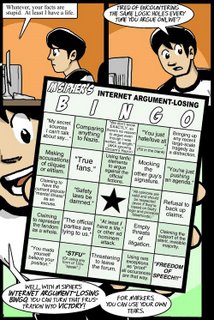 In truth it is sad how often this kind of thing comes up in arguments on the internet, typically due to immaturity, frustration, weariness, or foolishness on the part of the arguer. And let's be honest, all of us have used at least one of these "arguments" at times.

For the benefit of internet arguments everywhere, I offer this short primer on logic. These are logical fallacies, ones that ought to be ignored:
Fallacies of Distraction
*False Dilemma: two choices are given when in fact there are three options or more
*From Ignorance: because something is not known to be true, it is assumed to be false
*Slippery Slope: a series of increasingly unacceptable consequences is drawn
*Complex Question: two unrelated points are conjoined as a single proposition

Changing the Subject
*Attacking the Person:
*Appeal to Authority:
*Anonymous Authority: the authority in question is not named
*Style Over Substance: the manner in which an argument (or arguer) is presented is felt to affect the truth of the conclusion

Inductive Fallacies
*Hasty Generalization: the sample is too small to support an inductive generalization about a population
*Unrepresentative Sample: the sample is unrepresentative of the sample as a whole
*False Analogy: the two objects or events being compared are relevantly dissimilar
*Slothful Induction: the conclusion of a strong inductive argument is denied despite the evidence to the contrary
*Fallacy of Exclusion: evidence which would change the outcome of an inductive argument is excluded from consideration

Causal Fallacies
*Post Hoc: because one thing follows another, it is held to be caused by the other
*Joint effect: one thing is held to cause another when in fact they are both the joint effects of an underlying cause
*Insignificant: one thing is held to cause another, and it does, but it is insignificant compared to other causes of the effect
*Wrong Direction: the direction between cause and effect is reversed
*Complex Cause: the cause identified is only a part of the entire cause of the effect

Missing the Point
*Begging the Question: the truth of the conclusion is assumed by the premises
*Irrelevant Conclusion: an argument in defense of one conclusion instead proves a different conclusion
*Straw Man: the author attacks an argument different from (and typically weaker than) the opposition's best argument

Fallacies of Ambiguity
*Equivocation: the same term is used with two different meanings
*Amphiboly: the structure of a sentence allows two different interpretations
*Accent: the emphasis on a word or phrase suggests a meaning contrary to what the sentence actually says

Fun, Comments
Posted by Christopher R Taylor at 8:36 AM