"And abandoning Iraq to the terrorists promotes human rights how?" 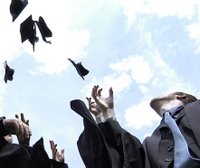 New York Times Publisher Arthur Sulzberger Jr. addressed graduates at the State University of New York at New Paltz on Sunday in their commencement ceremonies. During this speech, Mr Sultzberger apologized for various events, and the Daily Freeman carried excerpts:

"I will start with an apology," Sulzberger told the graduates, who wore black gowns and hats with yellow tassels. "When I graduated in 1974, my fellow students and I ended the Vietnam War and ousted President Nixon. OK. OK. That's not quite true. Maybe there were larger forces at play.

"Either way, we entered the real world committed to making it a better, safer, cleaner, more equal place," Sulzberger added. "We were determined not to repeat the mistakes of our predecessors. We had seen the horror and futility of war and smelled the stench of government corruption. Our children, we vowed, would never know that. So, well, I am sorry."

The media watch blog Newsbusters carried this story, noting that

The Monday Poughkeepsie Journal also has a story on Sulzberger's remarks and Romenesko has posted the text of the prepared address.

Commenters at the site did not throw their hats into the air:

One would think that after numerous quarters of declining ad revenues, subscribers and incresing newsroom scandels, combined with growing shareholder revolts, the publisher would focus on his business model rather than spew leftist talking points to a group of grads who most likely think he's an idiot anyway.
-by SixStringBassPlayer

"Sulzberger added the graduates weren't supposed to be let into a world 'where oil still drives policy ..."

Not agreeing with him, but what should drive policy? Leftist ideology? That's real useful for heating homes and fueling vehicles. Apparently, Sulzberger would have no problem abandoning those nasty oil reserves in the Middle East to whatever despot wants to take over. After all, poor folks in the U.S. could handle $5.00 a gallon gas, right? Inflation due to high energy prices...no problem. But wait, liberals always complain about high energy costs hitting the poor...geez, it's so confusing trying to figure out these limousine leftists. It's like they don't have any sense!
-by Republic1

And abandoning Iraq to the terrorists promotes human rights how?
-by NYT_sucks

Certainly an editor's personal comments do not necessarily indicate a bias or tendency of a newspaper to tilt to one side or another. But this kind of remark, combined with the Times' history and publishing record is another story. Certainly this kind of comment is amazingly presumptive and arrogant in it's assumption of his ideas being the only possible facts. Such an apparent trait is not ideal in an editor, I should think.

News Media
Posted by Christopher R Taylor at 8:48 AM

not to repeat the mistakes of our predecessor

What is up with these commencement speeches?! Why are they so blatantly political (read: liberal)? Can't they just give them a "we're so proud of you all, now go out and live a good life" speech?

I don't know, I wish such speakers would limit themselves to usual topics and not feel compelled to inject their personal opinions and politics into every single issue.